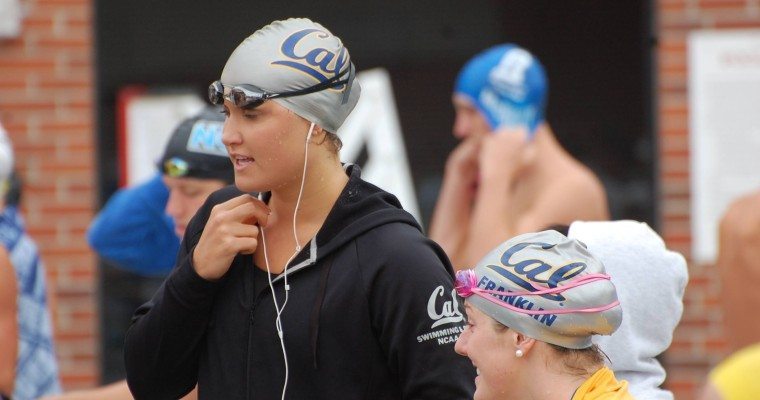 The Cal teammates above will be battling for the 200 IM title in a race that could possibly scare the NCAA record. Current photo via Anne Lepesant

One of the biggest showdowns of this meet may well be the 200 IM, where Cal superstars Missy Franklin and Elizabeth Pelton reign supreme over the NCAA this season. Coming in with top times of 1:52.93 (Pelton) and 1:52.99 (Franklin), there are no other challengers that have broken 1:55 this year. The two are very evenly matched in backstroke and breaststroke, while Pelton has the edge on fly and Franklin on free. With freshman Cierra Runge‘s timely arrival in Berkeley, Franklin has been relieved of her 500 duties and has focused on this event all year. While the Olympic gold medallist and world record holder was touched out by Pelton at the Georgia Invite, Franklin popped a 26 free split after being 2nd to the wall after breast to beat Pelton, 1:53.47 to 1:53.80. We saw the kind of speed that Franklin brought at last year’s NCAA champions, so we’ll have to go with her as the favorite to win this event.

The Golden Bears have a very good shot at sweeping the podium in this event, with sophomore Celina Li coming in at the #5 seed, and coming off of her 3rd place finish last year. She was only seeded at 1:56.01 and was able to pull out a 1:53.85, while she comes in with a 1:55.52 this year. Seeded just ahead of her, though, is Virginia’s Courtney Bartholomew. She scared a Natalie Coughlin record in the 100 back (49.97) with a killer 50.01 at the Georgia Invite, where she swam the 1:55.23 that she’s seeded with. Bartholomew has been hot all year, but Li has a monster breaststroke leg, which gives her the edge.

A group of ACC-ers sit right behind Li. That’s Virginia’s Kaitlyn Jones (1:55.61), Louisville’s Tanja Kylliainen (1:55.72), and Virginia’s Ellen Williamson (1:55.93). These are best times for all three of these ladies. Jones and Kylliainen were in the B final last year, while Williamson was edged out of that final.  Virginia and Louisville are both bringing strong squads to this year’s meet, so making the A final to maximize scoring opportunity is key for each of these swimmers.

Of four swimmers in the 1:56 low range, three, Theresa Michalak, Lindsey McKnight, and Ashlee Linn, are Florida Gators. The fourth is Texas’ Madisyn Cox. All four come in with seed times matching their bests, but Cox had the best finish last year and NCAA newcomer Michalak has never competed at the national meet, so we’ll give the nod to the Longhorn.

Dark horse: Clara Smiddy (Michigan). The freshman is part of a Michigan squad hungry to put some solid points up at NCAAs, and her time of 1:56.74 has her in 14th. This was done at the Big Ten Championships, where the first year grabbed a B1G title and earned a new lifetime best.

A matchup of Pelton and Franklin in the 200 back could be equally good.

*shakeshead* @ Franklin swimming for IM. What a waste.

It makes the most sense… she can’t double the 2fr/1bk… and probably wouldn’t be top 2 in 1bk… and the 1fr/2bk double is equally as tough.

Come on. She could do the 2back/1free double or the 1back/2free double… I mean she did the 1back/2free double at the Olympics in 2012, and look there. She won a gold in the 100 and finaled in the 200. Missy should be focusing on her backstroke and freestyle, not IM. She’s a world class back and freestyler, I don’t see her making an international debut in the IM’s anytime soon. Especially with Beisel, Dirado, Leverenz, Margalis, and many, many, more.

@POL & @SOPHIE – just stop. it never ceases to amaze me that commentators like you think training for one event kills you for another. it’s all cross-training/applicable experience. The 200 IM especially is great because it keeps things fresh for Missy while getting her more experience in what is arguable her best distance…200.

for goodness sakes, she’s in the 2Back this year…perhaps stop being so literal and trust that olympic coaches like McKeever know what’s going on.

It’s dumb to respond to trolls like Pol and Sophie, but Missy attracts so many negative comments here that I figured I would explain why 200 IM/200 Free/200 Back is clearly her best event choice. NCAA’s is about scoring points and winning a championship, so Teri and Missy are going to choose events that Missy can score the most points in, and the three events she’s in are all events she’s Top 2 in the country in. Missy is arguably Top 2 in the country in the 500 Free as well, but she has a full enough lineup as it is that swimming the 500 on Day 1 (right after the 200 Free relay) will make her unnecessarily tired in… Read more »

Geez, I don’t get the vitriol towards Missy Franklin and the decisions she made regarding college and what events to swim at the larger meets. It is none of anybody’s business if she decided to attend college for two years before turning pro, or what events she chooses to swim in the WCs and Rio.

Pol and Sophie, you two don’t have enough going on in your lives that you don’t have to worry about this stuff? Doubtful that you couldn’t withstand the scrutiny if the rest of the world was peering over your shoulders wondering why you make the decisions you do.

Pol – putting aside the fact that you dont think she should be swimming NCAA at all, what would you suggest her event lineup should be? 100 back/200 free double?

What about not competing in College at all. Like what I said, she’s done. I don’t see her winning an individual gold this year or Rio unless she goes back to Todd and start training over there. It was a mistake for her to compete in College and swimming under the overrated coach Teri/CAL.