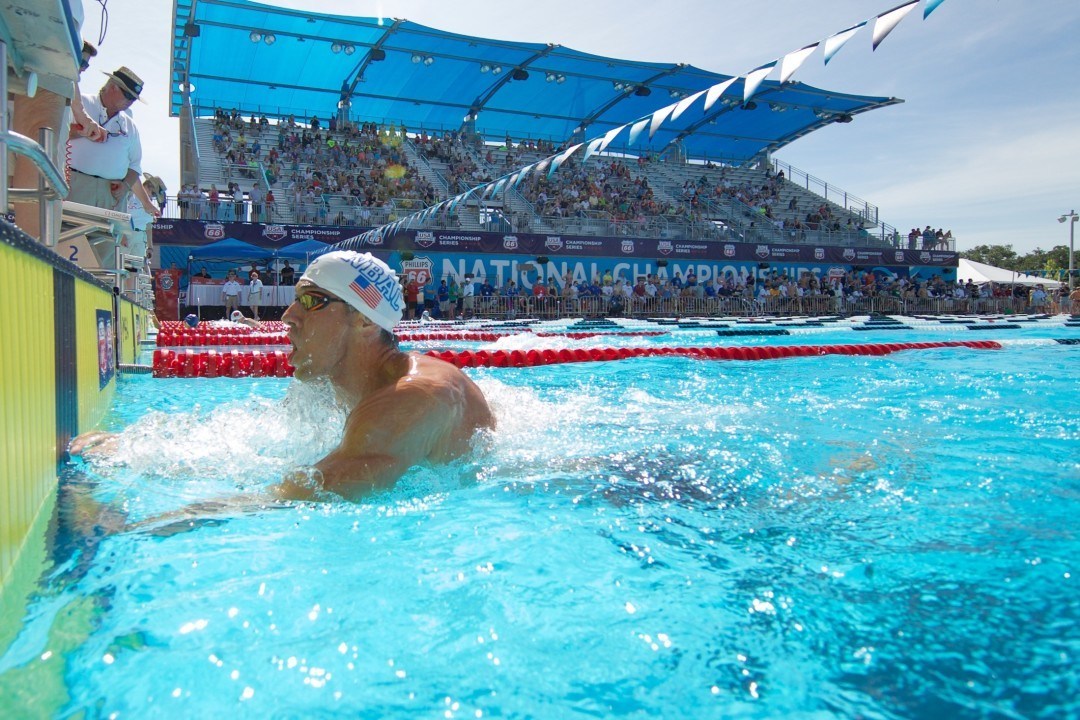 In great news for swim fans everywhere, but especially those at the Northside Swim Center in San Antonio, Texas, all 80 championship and consolation finalists of the U.S. National Championships are expected to be on their starting blocks tonight.

After watching North Baltimore Aquatic Club’s Michael Phelps win the 200m butterfly, the 100m butterfly, and the 200m IM on successive nights, each with the fastest time in the world for 2015, we will get to see what he has left in the tank as he takes on the 200m breaststroke final tonight.

First, though, will be the top 8 qualifiers of the women’s 800m freestyle. Sarah Henry of Aggie Swim Club and Sierra Schmitt of North Baltimore both put up 8:35s in prelims and will lead the field from the middle lanes.

Amanda Weir of SwimAtlanta’s 54.64 was the fastest time of the morning heats in the women’s 100m freestyle. On either side of her will be North Baltimore’s Allison Schmitt (54.81) and SwimMAC’s Madison Kennedy (55.14). Kennedy was National Champion in the 50m free, Weir was .14 back in second place. Schmitt, meanwhile, won gold in the 200m free.

The men’s 200m backstroke will have two 16-year-olds in the championship final, including the top seed, Michael Taylor of Dynamo Swim Club. Taylor dropped about a second in prelims, clocking a 1:58.41 which moved him from number five to number three on the all-time list for 15-16 boys. The other 16-year-old in the A final will be Sarasota YMCA’s Austin Katz (1:59.35), who won the championship title at Junior Nationals last week with 1:59.14, until this morning, the fourth-fastest 15-16 performance in history. Also seeking the national title tonight will be Carter Griffin of Denver Hiltoppers and Mizzou (1:58.51) and Jack Conger of Nation’s Capital and University of Texas (1:58.54).

In the women’s 200m breaststroke, Bluefish Swim Club’s Laura Sogar produced the morning’s sole sub-2:26 (2:25.16) and will thus occupy lane four in the final. Emma Schoettmer of Tucson Ford improved on her seed time by 1.9 seconds and qualified second with 2:26.33, while Condors Swim Club’s Emily Escobedo took 4.7 seconds off hers, swimming 2:27.64 this morning.

This year’s National Champion in the 100m breast, Andrew Wilson of Longhorn Aquatics, will be looking to sweep the breaststroke events; he put up the top time of the morning, dropping an impressive 5.9 seconds to hit the wall in 2:09.84. Nitro’s Will Licon (2:10.10) and Palo Alto Stanford’s BJ Johnson (2:11.92) will flank Wilson. Phelps went a lifetime-best by 2.4 seconds to qualify sixth with 2:12.68; he will be gunning for the win out of lane 7. As he said in his post-race interview, he felt he could make improvements were he to have a second swim.

The last individual event of the evening will be the men’s 1500m freestyle final. Team Santa Monica’s Jordan Wilimovsky, fresh off his World Championship win in the 10K open water event, qualified first with 15:13.28. 17-year-old Nicholas Sweetser of Gator Swim Club posted the second-fastest time of 15:14.14, while Zane Grothe of Badger Swim Club, National Champion in the 400m freestyle, will be in lane 3 with his qualifying time of 15:19.28.

You can find the complete heat sheet for Day Five finals here.

Go on Phelps! Leave it all out on the field… or the pool… yes the pool.

Kind of hope he swims free