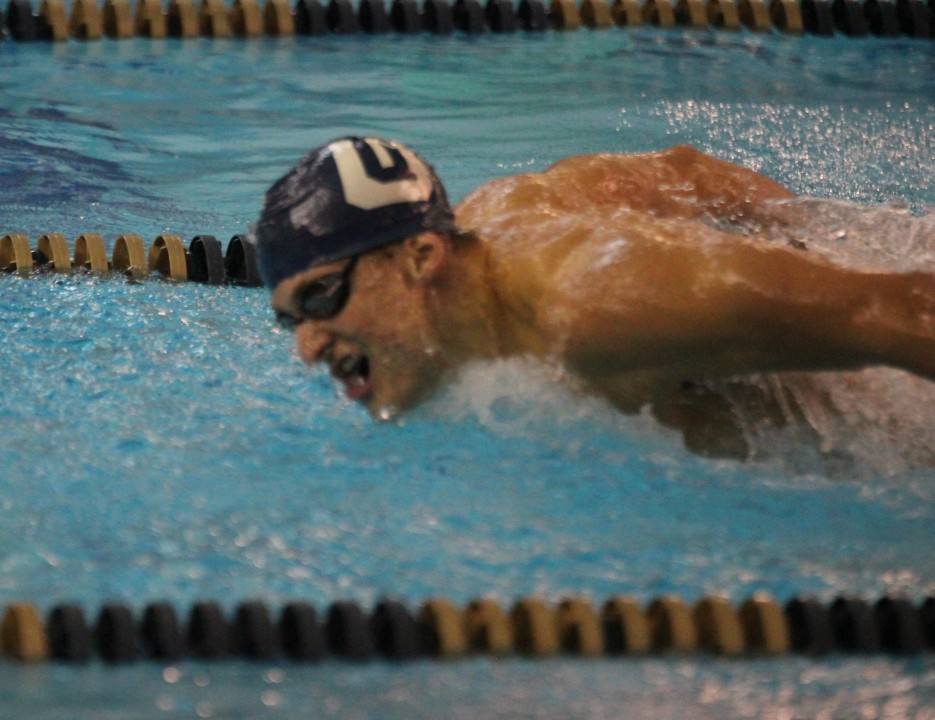 We’re down to the final day of NCAA Division II nationals, with thrilling team races coming down to the wire in both genders. The Queens men have been on a record-breaking tear led by freshman Nick Arakelian and sophomore Matt Josa, and they lead defending champs Drury by just 14 points.

Meanwhile the Queens women are looking for a national title of their own, leading Drury by 66 courtesy of record-breaker Patricia Castro.

Keep refreshing this page for event-by-event updates, and follow us at @SwimSwamLive on Twitter for up-to-the-second results, highlights and analysis from Indianapolis.

Lindenwood sophomore Alecia McGillivray added to her 1000 free title from earlier in the meet, going 16:46.25 to win the 1650 for the Lions. McGillivray had some challengers early, and actually trailed a number of swimmers at the 1000-mark, but closed really hard, dropping her splits from mid-30s to low-30s over the final 500 to take the win.

Bridgeport freshman Annagrazia Bonsanti took second, going 16:50.11, while the fastest swimmer to the 1000, senior Kendall Somer out of West Chester, wound up third in 16:50.21.

Florida Southern’s Alli Crenshaw came in next at 16:51.74, with a pair of women battling it out just a tick behind her. That was Delta State’s Melanie Tombers and Queens’ Meridith Boudreaux, who went 16:53.18 and 16:52.23, respectively.

With 3 scorers apiece, Drury and Queens stayed pretty even in this event, with Drury picking up just a single point to now trail by 65.

Make it a 4-for-4 weekend for Queens freshman Nick Arakelian. The rookie went 15:10.33 to win the 1650 and pick up his 4th title of the week so far. That time topped another freshman, Daniel Bis of Saint Leo, by about 1.7 seconds for the win.

Though that was a big scoring event for Queens, Drury is hanging in the hunt, now trailing by 36. SwimSwam’s Anne Lepesant has been scoring out the meet all week and has the men’s competition coming down to the wire tonight; she tells us this was a good event for Drury relative to seeds, with the Panthers picking up 2 points on Queens.

The first national record of the night went to Queens sophomore Patricia Castro, who has been lights-out all week. Castro went 48.92 to just barely sneak under the old record of 48.94 set last year by Wayne State’s Ana Azambuja.

Drury answered back, though, putting two into the A final to match Queens. Janet Yu was second for Drury and Wen Xu fourth, going 49.29 and 49.45, respectively.

In between was 50 free champ and national record-breaker Bryndis Hansen out of Nova Southeastern in 49.37.

The rest of the field featured a lot of experience, with three seniors taking 5th, 6th and 7th. Northern Michigan’s Debbi Lawrence led the way in 49.80, with Emily Reh of Limestone (49.87) and Lillian Gordy of Queens (50.08) coming in next. The final championship heat finisher was Natalia Garriock, a freshman from Saint Leo, who went 50.49.

Nova Southeastern sophomore Thiago Sickert picked up the 100 free national title in a touchout, going 43.18 to eke out the win over Bridgeport senior Ruben Gimenez‘s 43.22. Sickert went out fast, building a .16 lead at the 50 turn and hanging on for the eventual win.

Drury senior Samuel Olson was third in 43.68 as Drury used this event to make a run at Queens, who didn’t put anyone into the top 16. Drury could only score one swimmer themselves, though, and so Queens still leads, now by just 20 in a meet that’s looking like it could come down to single digits (Anne Lepesant has Queens currently winning by 3 based on her pre-session projections).

Wayne State’s Till Barthel came in fourth, going 43.80, and also joining him under 44 were two Lindenwood freshmen: Jakub Jonczyk (43.81) and former national record-holder in the 100 back Serghei Golban (43.94).

Rounding out the A final were Jordan Augier of Tampa (44.17) and Adrian VanderHelm of Simon Fraser (44.41).

Cal Baptist senior Mary Hanson also got in ahead of the defending champ, going 1:56.85. Arakelian was 1:57.66 at the end of what’s been a busy week for her.

That leaves Queens in the lead by 58 points with three events remaining as they attempt to knock off 2014 champs Drury.

Queens sophomore Matthew Josa completed a 4-for-4 sweep of individual event titles at this year’s national championships, but he couldn’t quite finish the 4-for-4 in NCAA records. Josa was 1:41.45 to easily win the 200 back, but missed his own Division II NCAA record of 1:40.74 set last year.

Much like his 200 fly yesterday, Josa went out fast, leading by a full second at the 100-turn, and struggled a little coming home. But it was still plenty enough to top the field by .98 seconds and might have sealed the meet for his Queens Royals. They now lead Drury by 28, a tough margin for the 10-time-defending national champs to overcome in just two races.

Lindenwood’s 100 back champ and NCAA record-breaker Krzystof Jankiewicz took second in 1:42.43, coming back on Josa with a nice 26.0 final leg. Another freshman, Grand Valley’s Metin Aydin went 1:44.26 for third.

It’s been a relatively quiet night for NCAA records compared to earlier in the week, but Lynn junior Rebecca Matthews did her best to change that with the fastest 200 breast in Division II history. The 100 breast champ went 2:10.77 to make it a sweep of the breaststrokes and break the 2:11.45 set last year by Drury’s Agnieszka Ostrowska.

Cal Baptist’s Alena Rumiantceva was second back at 2:13.32, and LIU Post senior Caroline Rademacher was 2:13.61 for third-place honors.

Ashland’s Hannah Mattar led the next big pack of swimmers at 2:15.77. Just behind were the duo of Nicole Weber of Saint Leo and Jade Arganbright from Cal U Pennsylvania. Weber touched out Arganbright 2:16.03 to 2:16.16.

That event featured no point-scorers from the top 2 teams, so the deficit remains stable at 58, with Queens leading Drury.

Nova Southeastern’s freshman Anton Lobanov continued to rewrite the men’s breaststroke record books with a 1:51.71 to win the 200 breast title. That smashes the old NCAA mark of 1:53.49 set last month at the conference level.

Lobanov was out in 53.43, well ahead of the field, and came home in well under a minute to take down the record and win by nearly 4 seconds.

Queens senior Nic Eriksson was second in 1:55.65, and those points probably sealed the deal on Queens’ national championship bid. The Royals lead by 32 and will likely only need to avoid a DQ in the final relay to end Drury’s ten-year win streak.

Missouri S&T sophomore Miguel Chavez touched out his fellow sophomore from Lindenwood Mateusz Pacholczyk 1:57.31 to 1:57.42 for fifth place, and Drury senior Kacper Pelczynski was just a tick behind in 1:57.55. Rounding out the A heat was Delta State’s Matteo Fraschi in 1:58.34.

In a fitting end to a meet that was brutal on the national record books, both Queens and Drury went under the old NCAA Division II record in the 400 free relay to close the meet. Queens led the way in 3:18.75, getting a 49.08 leadoff leg from Patricia Castro.

That left Queens atop the final team points, beating defending champs Drury by 51 to finally cap off an eventful NCAA Division II title.

Drury, Tampa and Nova Southeastern battled it out for meet’s final relay title, with all three teams separated by just about six tenths at the halfway mark.

Nova Southeastern had the best leadoff leg, getting a 43.11 from 100 free champ Thiago Sickert, but Drury’s Samuel Olson (43.70) kept pace. Tampa’s Jeremy Parker dropped a quick 42.98 on the second leg to pull his team back into things, with the top two teams splitting almost identical times.

Queens finished 7th overall, but that was still enough to seal their NCAA title, breaking a decade-long run by Drury in the NCAA’s Division II.

Royals did it! Just gotta be safe on the relay, congrats Coach Jeff/Peter/John

Congrats to Queens Women and Mens Champions!
Special recognition goes out to Caroline and Nick Arakelian for their outstanding efforts.
Livonia Michigan is very proud of your accomplishments!

Quote from one of Queen’s best swimmers ‘I wanted to train with Dave Marsh and Elite team, so I chose Queen’

I am not familiar with NCAA rules, but can NCAA swimmers train with pro swimmers?