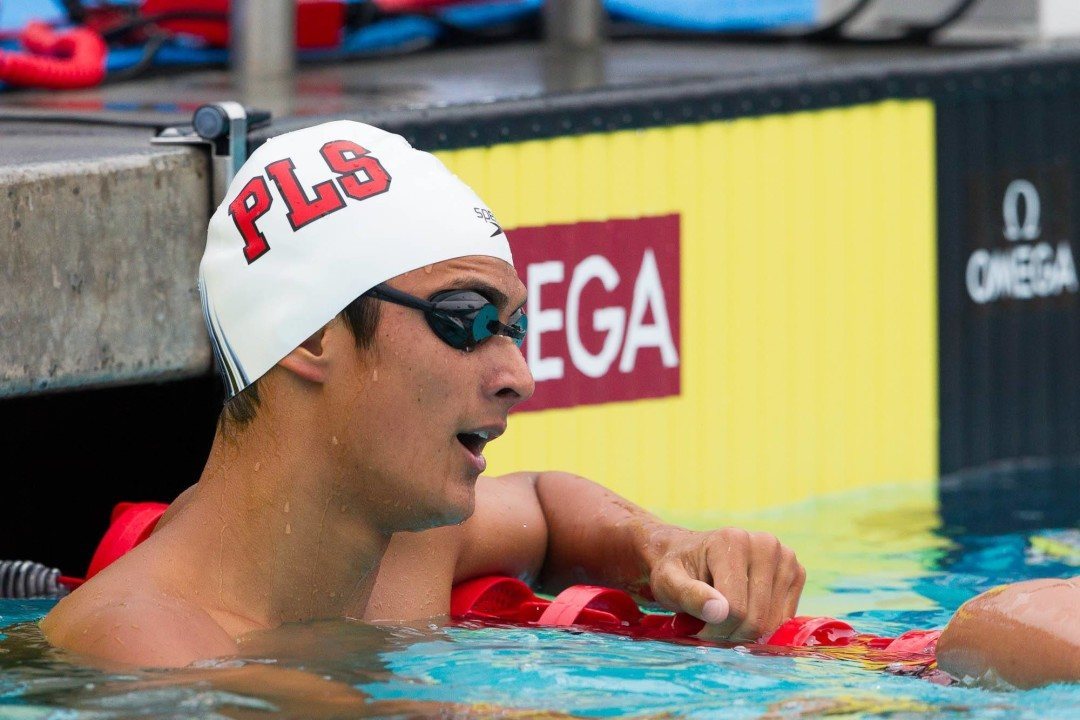 The Championship Record is on watch in the men’s 100 free. It currently sits at 48.97 done by Caeleb Dressel in 2013. USA’s Maxime Rooney and Australia’s Kyle Chalmers pose a major threat to that. Archive photo via Tim Binning/TheSwimPictures.com

Day 5 of the FINA World Junior Championships is set to kick off from Singapore. Here are a few races to watch:

The Championship Record is on watch in the men’s 100 free. It currently sits at 48.97 done by Caeleb Dressel in 2013. USA’s Maxime Rooney and Australia’s Kyle Chalmers pose a major threat to that.

Both Chalmers and Rooney will swim in the 10th and final heat of prelims, with USA’s Ryan Hoffer (49.82) joining them. Rooney has put up a quick 48.44 relay split at this meet, and lowered his best time to 49.21 on a relay lead off. Chalmers has shown some serious speed this week, putting up a blazing 47.68 to anchor split.

Before that, look for Brazil’s Felipe de Souza and Canada’s Markus Thormeyer out of heat 9, who will also challenge for the title. Thormeyer blasted a 48.77 split earlier, with de Souza splitting a 48.56.

In heat 8, the Italian duo of Alessandro Miressi and Alessandro Bori has a strong presence. Miressi cranked out a 49.06 anchor leg earlier in the meet.

Russia’s Mariia Kamaneva (24.97) brings the only sub-25 seed time to the table going into prelims of the 50 free. Swimming in heat 8, she’ll take a shot at the Championship Record of 25.02 done by Russia’s Rozaliya Nasretdinova in 2013. She’s also less than a tenth off the Junior World Record of 24.88, also done by Nasretdinova. She’ll be up against USA’s Lauren Pitzer and Australia’s Lucy McJannett.

Her Russian teammate, Daria Ustinova, will headline heat 7 with Australia’s Shayna Jack, USA’s Ashley Volpenhein, and Canada’s Penny Oleksiak. Oleksiak and Rikako Ikee will be returning for their 2nd swim of the morning after the 100 fly. Ikee will swim in heat 6.

Lithuania’s Andrius Sidlauskas will take a swing at the Championship Record and Junior World Record of 27.74 set by Peter John Stevens in 2013. He’ll be hard pressed to beat Russia’s powerhouse breaststroker Anton Chupkov in heat 7.

Croatia’s Nikola Obrovac will also be in the mix for a top qualifying time. He’s slated to swim in heat 6. One heat before that, USA’s Michael Andrew and Reece Whitley will race Turkey’s Huseyin Emre Sakci.

Looking forward to what time Felipe and Spajari will drop.. Spajari (even not mentioned) will probably final too..