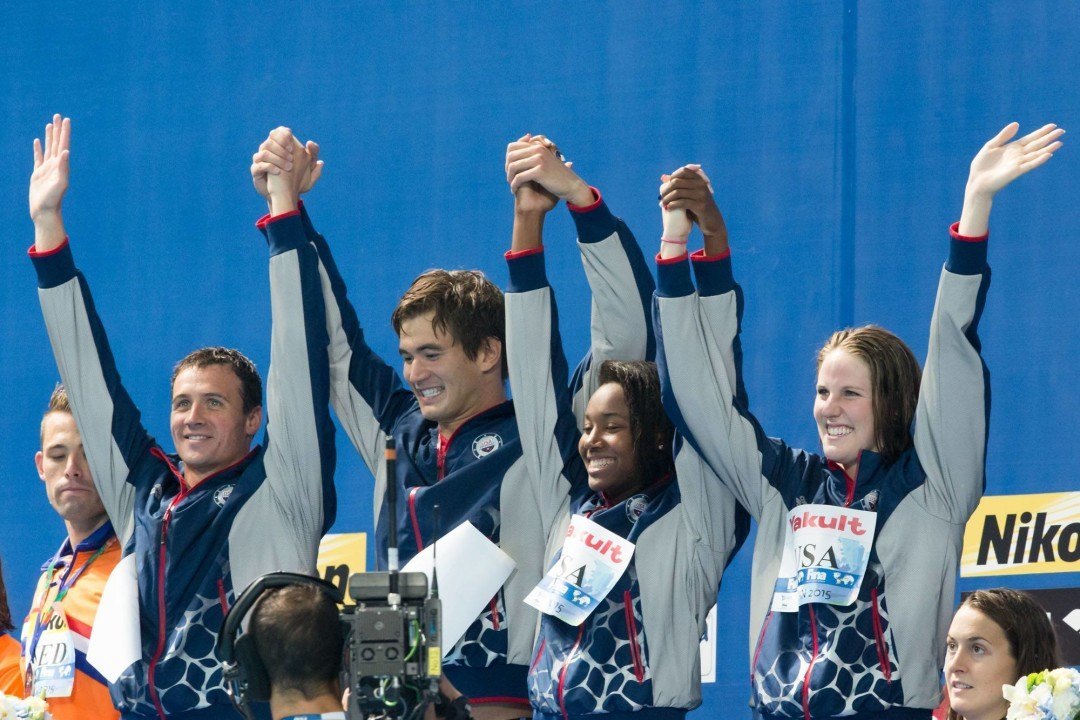 We’ve had a field day poring through post-World Championships data, as they tell an interesting story about trends in national... Current photo via Tim Binning/TheSwimPictures.com

We’ve had a field day poring through post-World Championships data, as they tell an interesting story about trends in national swimming programs. While the United States had arguably their weakest World Championships showing since 2009, other countries fared much better than during the past six years.

If we look at the number of finalists per country as a proxy for program depth, China, Great Britain, Russia and Canada showed great promise, with their strongest team perfomances since 2009. In medal count, Great Britain, Hungary and Sweden were better than they had been at any time in the last four World Championships. (Nota bene: those data are skewed as the mixed relays added two events to the total.)

France, Hungary, Australia and Sweden all had a particularly high percentage of finalists go on to medal.

Robin Pla, a researcher with the French Swimming Federation (FFN), doctoral candidate at the l’Université Paris Descartes, and assistant coach at France’s elite National Institute of Sport and Physical Education (INSEP) has drilled even deeper into the Kazan results. Pla has analyzed each race from every conceivable angle, and in a collaboration with SwimSwam, he has provided us with some of his most interesting findings. Click here to see Pla’s graphs for SwimSwam. (The rest of his analysis can be found @RobiinRoad on Twitter)

Only 10 finalists for France We have sent a lot of tourists in Kazan. 9 on the men’s side 6 medals Great ratio! 🙂 6 on the men’s side Our girls simply don’t have the world level right now. That’s why Fabrice Pellerin suggests to put very tough minimum times to do at next French nationals to qualify for Rio. Even if the result is no French girl at olympic games. To change the mentality and raise the bar much higher. USA Swimming should be well inspired to do that with your sprinters. 4 golds Great ratio! ) The French federation is satisfied. Cool. Without Manaudou and Lacourt…. But it has always been the case in French swimming. 3 or… Read more »

“You need taller boys and girls”

I don’t really see this as an issue. There are already plenty of tall swimmers in the US at every level. In fact I’d say that was the least of the problems.

Size is not the matter here !

are we watching the same sport?
The men’s silver 100 free medalist and fastest man with relay split is a good 3 inches shorter than Adrian.

The women’s double gold medalist is shorter than most American sprinters.

Bobo, I think what you’re saying about the lack of depth at the top level (ie: gold medalists) is true of every country! Without Sjostrom, Sweden does badly. Without Hosszu and Cseh, Hungary is unsuccessful. What I see is an era of “Star Swimmers” in which a relatively small pool of athletes from all over the globe (rather than just the traditional swimming powerhouses) are on all the podiums. Perhaps the US, Australia and China have a few more of them, but it’s exciting that countries like Lithuania and Jamaica can produce international medalists in our sport now.

US usually had multiple individual gold medallists, this time it was only Ledecky and Locthe
At 2013 US had Greevers, Lochte, Ledecky and Franklin, before US had Soni, Vollmer, Hardy and others.. US genereally had someone very amazing (Phelps before, now Ledecky) and other pretty good swimmers, now they still have the very amazing one, but the number of pretty good swimmers (Compared to the rest of other, who has caught up US) in smaller.

3 US relays disqualified in 2001! 😆
2 early starts in the men’s 4X100 medley and the women’s 4X200 free. 😆
Looks like there were timing problems too. I didn’t remember that either.
And the men’s 4X100 free for Nate Dusing replacing Gregory Busse without announcing the change at least one hour before the competition. 😆
A lot of drama!
I’ve found that recap.
http://lubbockonline.com/stories/072901/pro_0729010092.shtml