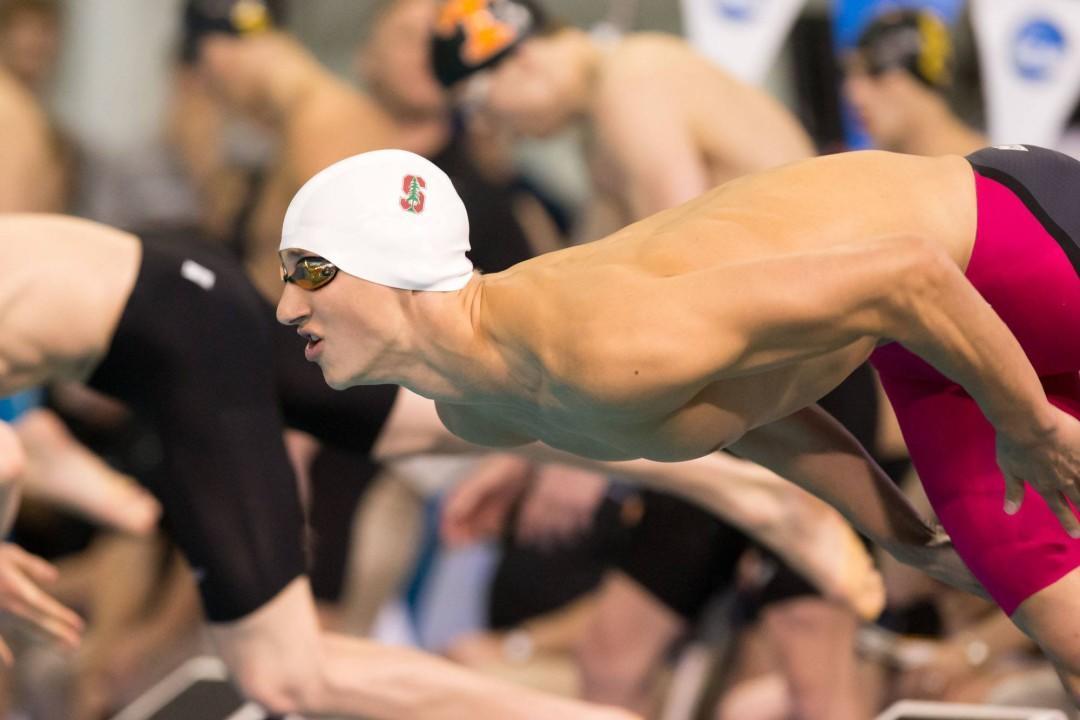 Stanford's Connor Black heads into the first night of finals at the A3 Invitational with the top seed in the 50 free.

The 2015 A3 Performance Invitational kicked off today in Monterey Park, California. The meet is being hosted by the University of California, San Diego, and will run from today through Saturday with prelims and finals sessions every day, along with an additional distance session Saturday between prelims and finals.

Notable teams competing are the Stanford Cardinal men, the UCLA women, and UC Santa Barbara, among others.

The men’s 500 free had 3 Stanford swimmers in the top 4, with Liam Egan leading the way in 4:21.22. Defending Pac-12 1650 champion Danny Thompson was 2nd in 4:21.42, and Jimmy Yoder of Stanford was 4th in 4:26.22. The third seed went to Nolan Newland of California Polytechnic State University in 4:23.72, who took nearly 20 seconds off his seed time this morning. The battle tonight will be between Egan and Thompson for the win.

Franzi Weidner of Hawaii and Whitney Jorgensen of Pacific took the top two times in the women’s 200 IM prelims, in times of 2:01.72 and 2:01.78, respectively.

The Stanford men dominated the 200 IM prelims, with the top 5 qualifiers for tonights final all coming from the Cardinal. Pan Am medalist Max Williamson and senior Gray Umbach tied for 1st, both finishing in 1:47.22. They were followed closely by sophomore Curtis Ogren in 3rd, and freshmen Abrahm Devine and Jack Walsh in 4th and 5th. The Cardinal have a budding IM group, and it will be a good battle between them tonight for the win. Umbach would have to be considered the favorite heading into tonight.

The women’s 50 free was led by Caroline McTaggart of UCLA in 23.02. She is followed closely by Lauren Vosseler (UCSB) and Linnea Mack (UCLA).

Stanford continued their dominance in the men’s events, claiming the top three spots in the 50 freestyle. Connor Black (20.03), Sam Perry (20.09), and Spencer DeShon (20.45) are the top three seeds heading into tonight. Stanford freshman Cole Cogswell (20.65) was 6th this morning and will also swim in the A-final.