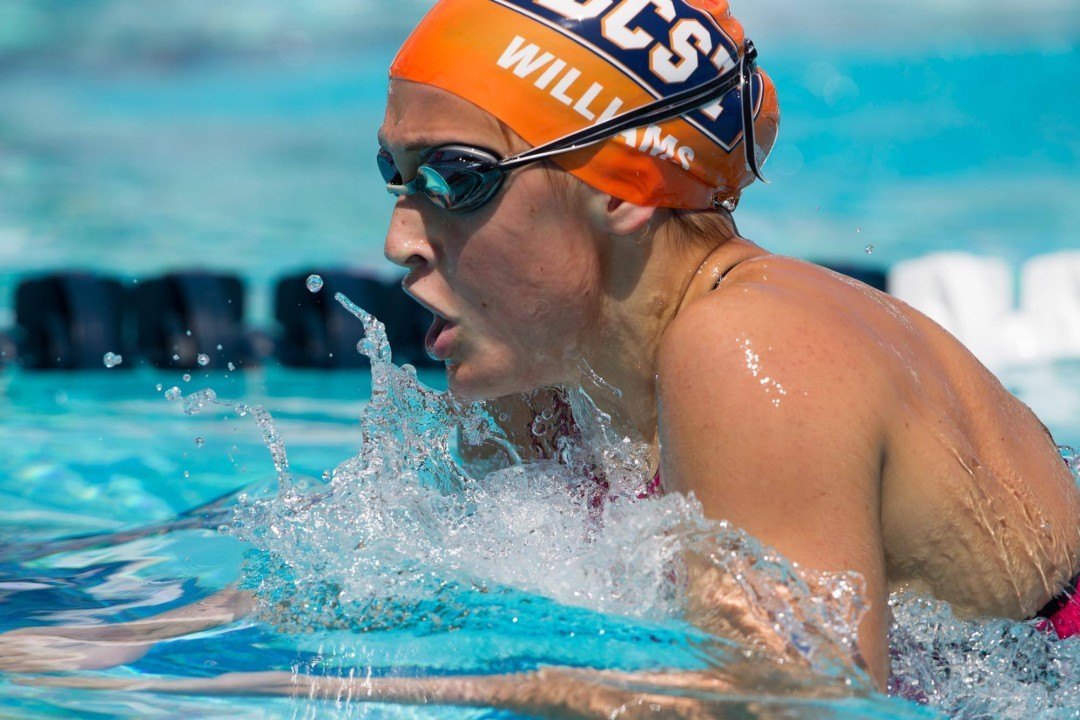 Kim Williams will look to sweep the IMs for 2014, coming in as the top 200 IM seed this morning. Current photo via Tim Binning/TheSwimPictures.com

Junior Nationals head into their final day in Irvine today, with the last four Junior National titles for each gender up for grabs. This morning’s prelims will be relatively quick, with just the 200 IM and 50 freestyle races going off. Early heats of the girls 1500 and boys 800 will take place this afternoon, and the 4×100 medley relays will be added to the lineup tonight.

400 IM winner Kim Williams leads the girls 200 IM field into action, with NBAC’s Heidi Miller in tow. Also highly-seeded in that race is Allie Szekely, who put up the top time in prelims of the 200 breast but was disqualified, apparently for some sort of pullout infraction.

On the boys side, another swimmer will look for redemption from a 200 breast DQ – national high school record-holder Curtis Ogren is the top seed in the boys 200 IM after being disqualified out of the A final last night.

Carmel’s Amy Bilquist goes for her third win in the 50 free today, sitting first a day after winning the 100 back in a touchout. On the boys side, Caeleb Dressel is set to make his 2014 Juniors debut, the top seed ahead of 100 back champ Michael Andrew. This one is a really loaded field, featuring names like Auburn commit Jacob Molacek, 16-year-old Arizona speedster Ryan Hoffer, 100/200/400 free winner Townley Haasand Terrapins star Justin Lynch.

Allie Szekely had the first big swim of the day to nab the top seed in the girls 200 IM. Dropping a tenth from her lifetime-best, Szekely went 2:15.80 and sits first by almost two seconds heading into tonight’s final. You could see this one setting up, as Szekely, typically known as a breaststroker, has really been tearing up the backstroke races in Irvine so far this week. She split 33.4 on backstroke and just 40.03 on breast – she’ll likely try to move that split down into the sub-40 range tonight as she’ll be pushed a bit more late in the race.

Lauren Barber of the JCC Waves is the third seed heading into finals, blasting a big 39.6 breaststroke leg to come in just a tenth behind Zeiger at 2:17.76. Williams was just behind that, going 2:17.80 this morning, though her freestyle split of 33 might suggest she was saving something for the final.

Iowa Flyers 14-year-old Ruby Martin went 2:18.13, as she’ll become the youngest swimmer in the championship final tonight. Lakeside (Kentucky)’s Leah Stevens and North Baltimore’s Heidi Miller finished just .01 apart, with Stevens holding the 6th seed at 2:18.52 and Miller 7th at 2:18.53. The final transfer spot the A final went to Miranda Tucker, who busted a 38.9 split on the breaststroke leg, the fastest of the entire field on that stroke. Tucker was 2:18.83. Cal commit Maija Roses leads the B final, going 2:19.20 for that spot.

Curtis Ogren came into prelims with the top seed, and he’ll do the same for finals after going 2:02.64 this morning. Ogren is one of the top incoming IMers to the NCAA, and dropped another eight tenths off his best in this race. He’ll take a middle lane alongside Austin Van Overdam of Cypress Fairbanks tonight. Van Overdam was 2:03.89 for the second seed.

Fresh off his first Junior National title last night, Michael Andrew is the third seed here for Indie Swimming, going 2:04.44. Andrew has been as fast as 2:04.13 in the past, so look for him to try cracking 2:03 tonight in chasing down the top two seeds. He went out very fast this morning, with the top butterfly split overall at 26.30.

Jared Butler of Rockwall, an incoming Texas Longhorn, grabbed the seventh seed at 2:05.04, and 200 back champ Patrick Mulcare rounds out the A final in 2:05.14. Breaststroker Ross Palazzo just missed the A heat, going 2:05.25, but putting up the field’s fastest breaststroke split at a blazing 34.88.

On the girls side, Amy Bilquist has owned this meet. The Carmel, Indiana 16-year-old holds the top seed heading into finals of the 50 free, looking for her third Junior National title of 2014 after taking the 100 free and 100 back earlier in the week. Bilquist was 25.49, a bit off her seed time but likely saving her best swim for finals. The National Age Group record is still a ways off at 24.80 (set by Simone Manuel), but Bilquist could get close to it with a big swim.

15-year-old Lauren Pitzer is second in a heat with some serious youth. Pitzer25.73 to win the first circle-seeded heat. Behind her is Katrina Konopka of Y-Spartaquatics at 25.89.

Right behind them, three different girls tied for fourth place, each just getting under the 26-second barrier at 25.99 this morning. Bilquist’s Carmel teammate and fellow 16-year-old Veronica Burchill was one, going a lifetime-best by a tenth. 200 free winner Stanzi Moseley, also 16, is another, going a lifetime-best of her own by three tenths. The Bolles School’s Kasey Schmidt cutting just a few hundredths off her best.

NC State’s young rising sophomore Natalie Labonge sits seventh at 26.04. The final championship heat slot was claimed by Ashton Ellzey from the City of Mobile. Both of those last two swimmers had big swims out of the early heats to jump into the final.

Fans have been waiting to see Caeleb Dressel all week, and he made it worth the wait. The 17-year-old sprinter went 22.62 this morning to run away with the top seed. This is Dressel’s first and only event at Juniors, as his main focus is Senior Nationals next week, but it’s still a good sign to see Dressel competing at a high level after a lengthy absence from the spotlight this summer. That’s still a half-second off his best, but Dressel noticeably let up at the end of the race, seeing he was well ahead of the field and cruising in for a safe win. We likely won’t see what Dressel is capable of even tonight (as he’s probably saving his very best stuff for Nationals), but his finals swim will still be a highly-anticipated event tonight.

There was another tie after that, with Canyon’s Cole Cogswell and Nitro’s Tate Jackson each going 23.26 for fifth place. Scott Johnson (23.29) and Indiana’s stud relay anchor Blake Pieroni (23.31) round out the A final.

Showing how deep this event is, that whole heat (minus Dressel) came in within a single tenth of a second, all between 23.21 and 23.31.

Just on the outside of the A final are Ohio State’s Matt McHugh and Indie’s Michael Andrew. Each went 23.34 to tie for 9th, just .03 out of the championship final. They could wind up in a swim-off if anyone scratches out of the top 8 (perhaps Dressel, still saving up for Senior Nationals?) otherwise they’ll do battle tonight in the consols.

Also making his Juniors debut in this event was NCAP’s Andrew Seliskar, who finished 23rd at 23.59. Seliskar is mostly known for his longer events, but has a legitimate shot at making the overall US National team next week.

Update: It was Pieroni, not Dressel, who wound up scratching out of finals. That put Andrew and McHugh into a swim-off where they both went faster – Andrew won in 23.13 to McHugh’s 23.17, giving Andrew the lane 8 spot in tonight’s A final.

Juniors will continue with early heats of the girls 1500 and boys 800. Those events are run as timed finals, with the fastest 8 swimmers in each competing during finals tonight.

The big gun arrives. Hoping to de a 21.8 from dressel.

21.8 tonight? 😯
It would be astonishing but I believe you are a little too optimistic.
If he swims close to his best time, it will be great in my opinion.

Does anyone know what a “Speedo Hot Heat” is/means?

I wondered the same. 🙂
Some are. Some others are not.

Speedo sponsors the meet so they randomly assign heats a “hot heat” and the winner of the heat gets a prize from Speedo reps. Swimmers don’t know its a hot heat until they finish, king of a fun way to market Speedo and reward swimmers. This meet is a 10$ gift card to be used at Speedo tent, I’ve been at other meets where Speedo has given away other types of Speedo swag.

I figured it had some sort of incentive–thanks guys!

Girls’ 200 IM
Very easy Allie Szekely in prelims. If she isn’t disqualified in final, she will win by a good margin.
I see her win in 2.14 something.
Madison Homovich was again in the water! 23rd time after the prelims. Hopefully she will scratch the C-Final to focus on the 1500 free.

Boys’ 200 IM
Ogren is the favorite.
I think Andrew has kept energy for the 50 free prelims.
He can swim much faster tonight in final. 2.02?

I’m with you on that, expecting to see a 2.02 from Michael tonight!