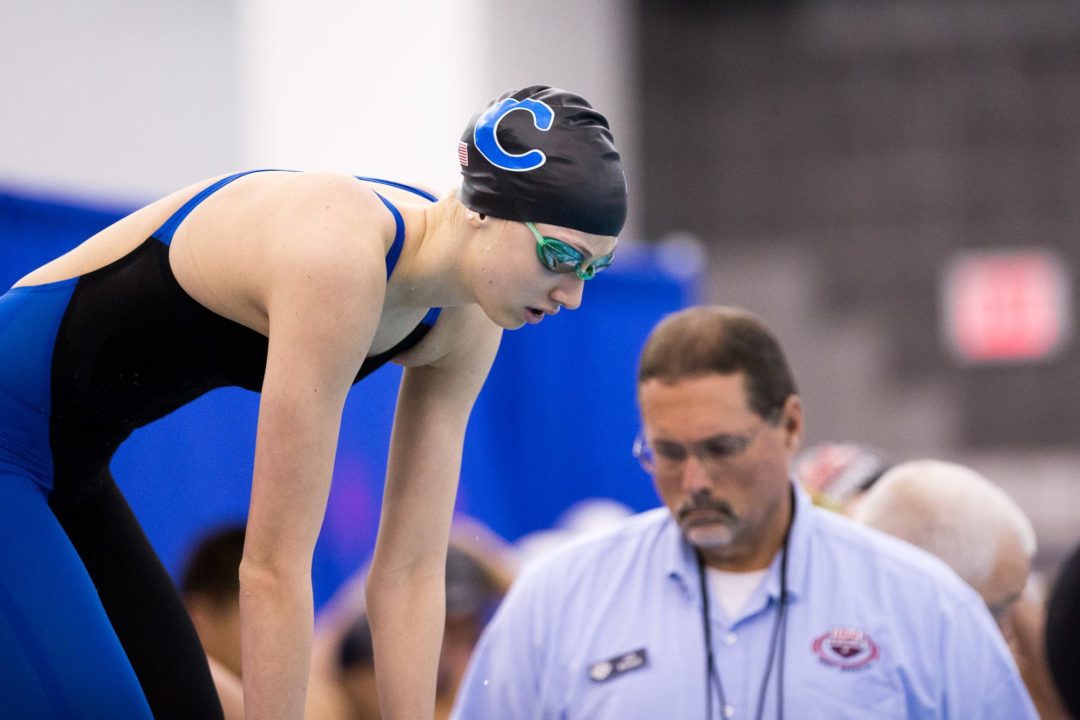 Amy Bilquist will begin her quest for three individual titles today, running away with the top seed in the girls 100 free. Archive photo via Tim Binning/TheSwimPictures.com

The second day of Junior Nationals is set to kick off in Irvine, California this morning. After an action-packed first night, day 2 is scheduled for some entertaining showdowns as well.

Carmel Swim Club’s Amy Bilquist comes into the meet with top seeds in three races, and she’ll tackle the first of those races this morning. She leads the final circle-seeded heat of the 100 free, with JCC Waves’ Lindsey Engel and NBAC’s Heidi Miller heading the other two.

The 400 IMs have been broken into A and B flights. Unfortunately, the hyped showdown between Corey Okubo and Curtis Ogren won’t happen in the boys race, as Okubo has scratched, focusing on the 200 back instead this morning.

The other event this morning is the 200 back, where 15-year-old phenom Erin Earley leads the girls field with her outstanding seed time of 2:10.95 from earlier this summer.

16-year-old Allie Szekely won the opening circle-seeded heat to take top billing in the girls 200 back and held on through the final two heats. Her 2:12.39 will hold up as the top seed heading into tonight. That turned out to be by far the fastest heat of prelims, as the top three seeds all came out of it.

Cameron McHugh, who finished second in that heat to Szekely, will be the second seed after going 2:13.30. Third-place Claire Adams of Carmel Swim Club is the three-seed in 2:13.45.

Coming in with a short-course yards seed, Y Spartaquatics 18-year-old Danielle Galyer roared to the fourth seed from an early heat. She went 2:14.00, which is a lifetime-best in meters by three seconds.

Top-seeded Erin Earley went 2:14.02 to jump into the A final, well off her previous best of 2:10. We’ll find out tonight if Earley bagged her prelims swim, or if she’s perhaps saving a full rest and shave for Senior Nationals next week.

Dynamo’s Michael Taylor cut four seconds off his seed time to blow away the prelims field in the boys 200 back. Taylor, just 15 years old, went 1:59.27 and leads the finalists by over a second. Closest to him is Badger’s Patrick Conaton, who went 2:00.50 to win the heat just before Taylor.

Firestone Akron’s Joey Reilman is close behind at 2:00.73 – he was the winner of the other circle-seeded heat. Second in that heat was Patrick Mulcare, who is now the fourth seed in 2:01.61.

Last night’s 200 fly winner Corey Okubo sits fifth after going 2:02.00. He dropped the 400 IM later today and can focus completely on this backstroke race in the final. His Aquazot teammate Thomas Smith is the next seed, at 2:02.16.

Sarasota YMCA’s Austin Katz came out of an early heat to make the A final. His prelims time was 2:02.44. SwimMAC’s Nathan Murray will be the final entrant into the championship heat. He went 2:02.71 this morning.

Carmel’s Amy Bilquist engaged in a quick dual with Roadrunner’s Stanzi Moseley in the final heat, with Bilquist winning 54.88 to 55.03. Those two 16-year-olds will be the top seeds tonight and will meet again in those two middle lanes. Third place in that heat was Bilquist’s Carmel teammate Claire Adams, who went 55.89 for the third overall seed.

Katrina Konopka of Y Spartaquatics in South Carolina went 55.97 and sits fourth, the last girl under 56 this morning. There’s a bit of a dropoff after her. Natalie Labonge, fresh off a freshman season with upstart NC State, went 56.41 for fifth. A third Carmel girl, Veronica Burchill, made the A final – Burchill went 56.45, underscoring why those Carmel relays have been so dominant as of late.

15-year-old Paige Madden of the City of Mobile in Alabama came from an early heat to nab the last guaranteed final spot, going 56.47. After her, Megan Moroney and Lauren Pitzer tied for 8th place at 56.51, setting up a potential swim-off for the last finals spot. The winner will grab lane 8, while the loser will head to the consols to face Taylor Ruck of Scottsdale Aquatic Club.

Update: Moroney won the swim-off, going 56.32 to take control of the A final spot. That’s two-tenths faster than she went in prelims. Pitzer was 57.50 and will lead the B. In addition, Melissa Pish and Claire McIlmail swam-off for 24th, with the 14-year-old Pish showing great poise in going 56.90 to earn another swim tonight. McIlmail went 57.47.

It was a more distance type who took over the boys 100 free this morning, with NOVA of Virginia’s multi-distance freestyler Townley Haas taking the top seed in 50.39. Haas, who is probably best in the 400/500 distance, showed some incredible range in driving down even closer to that 49-second range. Haas cut two tenths off his PR this morning in taking the number one slot.

Just behind him is Dynamo, Georgia product Knox Auerbach, who went 50.45 and could make this a race tonight. That’s a full second drop off his best as he and Haas separated themselves from the field by about a half second.

Pleasanton’s Maxime Rooney is the third seed in 50.96, joining the top two under 51. The next three guys were right on the edge of cracking that mark: Michael Jensen (51.04) Tabahn Afrik (51.05) and Michael Domagala (51.07). The final swimmer into the top 8 was the Bolles School’s Tyler Rice in 51.13. Following suit with the girls’ race, Kyle Decoursey of Zionsville in Indiana and Machine Aquatics’ James Murphy tied for 8th in 51.23, setting up a swim-off for the last A final spot. Just two hundredths back of that swim-off was Jeff Newkirk, who will lead the B final along with the swim-off loser.

Update: Murphy went 51.08 to beat Decoursey for the championship final spot. Decoursey was just .08 behind in 51.16.

Kim Williams out of Bellevue Swim Club won the second-to-last A-flight heat with the fastest overall time. Her 4:45.97 leads by a little more than a second. Things can change in a hurry in this race, though, where many of the top swimmers will save something for finals.

Savannah Faulconer and Leah Stevens engaged in a back and forth in the final heat, with Faulconer eventually winning and the two putting up the second- and third-fastest times of the morning. Faulconer was 4:47.19 for Y-Spartaquatics and Stevens went 4:47.72 for Lakeside.

Indiana’s Lauren Edelman went 4:49.56 to in the heat before that, and she ends up as the fourth seed. Just behind her in that heat was Hannah Kastigar, who sits fifth in 4:50.74 for Aberdeen Swimming.

Palo Alto Stanford’s Curtis Ogren is the clear-cut top seed in the boys 400 IM, leading all comers by over two seconds this morning. Ogren, who will stay in Palo Alto to attend Stanford next fall, went 4:18.77, within a second of his best. With Aquazot’s Corey Okubo scratching out of this race, Ogren will mostly be racing the clock tonight.

Ian Rainey won the other circle-seeded heat in 4:20.82 to take the second seed and an inside lane alongside Ogren tonight. That time is three seconds better than his seed. Cascade’s Abrahm Devine was 4:22.00 from that heat to sit third overall.

Austin Van Overdam from Cypress Fairbanks was second to Ogren in his heat and sits fourth overall at 4:23.12. Just behind is Premier Aquatics’ Benjamin Walker (4:23.36) and Tualatin Hills’ Patrick Mulcare (4:24.08), also from the same prelims heat.

Aquazot’s Alex Peterson sits seventh in 4:24.22, and the last A final spot went to SwimAtlanta’s Tom Peribonio in 4:24.28. Just missing the A heat by .3 was Michael Messner out of Santa Clara. Messner will lead the consols at 4:24.58.

Psycho dad… Grab a stopwatch and time the tempo of the best backstrokers in the world. They are generally slower tempo than national caliber swimmers. It just looks fast because the hand is further away from the body. Next time you have something snarky to say… Think first. It makes you look like a fool. Bobo knows his stuff.

Your link to the live stream is not correct.
Here’s the good one.
http://www.usaswimming.org/DesktopDefault.aspx?TabId=2146&Alias=Rainbow&Lang=en

A few words about Michael Andrew.
I was a little skeptical after seeing he would swim that very tough double.
And of course the 200 back has ruined his 100 free.
Result : zero qualification in final tonight.
After day 2, still no A-Final for him.
But it’s too early to draw conclusions.
His best chances to shine are the 100 fly, the 100 back and the 200 IM.

Correction. Andrew qualified for the 200 back C-Final but will not swim it tonight.

Bilquist continues to impress and if she continues her rapid rate of improvement this summer, can be in the conversation for a relay slot. I don’t even remember seeing her name before until a couple Grand Prix meets ago last month.

What about Stanzi Moseley? 1998 born. I knew about Bilquist but Stanzi is a revelation.

My live stream has crashed during the boys’ 200 back prelims. I didn’t see anything then.
Hopefully it will be fixed for the finals.

Boys’ 200 back
Impressive prelims for 15-year-old Michael Taylor. Big new PB under 2 minutes.
It looks like he is the new big talent coming from Dynamo Swim Club.

Benjamin Walker is a major talent. I asked you all to remember that name last year. A Nitro kid that moved ti Houston over a year ago. He has no weak stroke and his back and breast are very very good.

Sorry. I didn’t watch the prelims.
And I will remember his name. I have a very good memory.
And since you talk about your club Nitro, I was surprised to not see 15-year-old Sean Grieshop swim that event this week. He swam 4.26 at 14 last summer.

Wow– Michael Thomas in 32nd place with a 2:05. I expected much better after his breakout 200 fly yesterday, and his yards 1:43 from March. I wonder if something weird happened in his swim?

I think he had a pretty tough double. They say 200 back is one of the toughest events on your legs–kicking upwards against gravity. I think I heard Phelps or Lochte say that once. Anyway, Michael Andrew swam the 200 back and then the 100 free approximately 40 minutes later. I hope he doesn’t choose this kind of double again this meet, or at SR Nats. He had a nice PB in his 100BR last night.

I’m thinking with Sr Nationals starting next week he’s not fully rested and would be unlikely to do this double even if it was on the same day there.