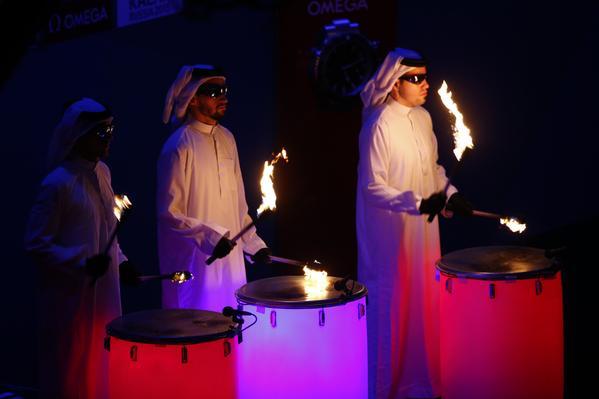 Qatari flame-drummers entertained the crowd as a warmup to the first day's finals at the 2014 World Short Course Championships in Doha, Qatar. Current photo via Doha 2014

The first day of the 2014 World Short Course Championships in Doha, Qatar are underway, where 5 finals and 5 semi-finals are on the schedule.

Refresh often as we will be updating recaps as the races happen below.

The first gold medal of the 2014 World Short Course Championships went to the FINA World Swimmer of the Year: Chad le Clos. Le Clos sat in 2nd for most of this race as he let the hard-charging Serb Velimir Stjepanovic take a half-second lead early.

Surprisingly, though, Stjepanovic, who is a great 400 swimmer, ran out of gas in a big way on the last 50 meters – splitting just 26.84 (second slowest of the field).

As he faded, le Clos took up the baton and charged to the front, eventually winning in 1:41.45.

Dominik Kozma, the top seed in prelims, was a little faster in finals with a 1:42.25, and though a great finishing kick almost caught Lochte for him, the 23-year old wound up in 4th.

She didn’t quite get that mark in semi-finals, but she was incredibly close with a 28.81 – just missing Jessica Hardy’s 28.80 suited World Record from 2009.

The swim did, however, break both the Lithuanian National Record of 28.89 (Meilutyte’s old personal best) as well as the Championship Record of 29.44 that she used to win this title in 2012.

She’s not the only swimmer within range of that record. Jamaican Alia Atkinson was a 28.99 for the 2nd seed, which just missed her own National Record of 28.94.

Those two were well ahead of the field, with the Netherlands’ Moniek Nijhuis taking 3rd in 29.69 – just .01 shy of her National Record.

Australian 21-year old Mitch Larkin swam a 49.62 in the men’s 100 backstroke to take the top seed in the semi-finals. That missed his Australian Record set earlier this year, but is still faster than anyone else in his country’s history has been.

The rest of the top 13 in this final were tightly bunched between 50.1 and 50.9, led by Brazilian Guilherme Guido in 50.12 and Japan’s Ryosuke Irie in 50.16. Those two along with Matt Grevers (50.26) will surround Larkin in finals and all came out of heat 2 in the semis – giving Larkin some new scenery for the next round.

Germany’s Christian Diener took 5th in 50.32, followed by the second American Eugene Godsoe in 50.42. Poland’s Radoslaw Kawecki (50.54) and France’s Ben Stasiulis (50.68) round out the finalists. The biggest name to miss the final was Britain’s Chris Walker-Hebborn. He swam a 50.76 to put him 10th – missing the final by less than a tenth.

This record, and the win for that matter, was all done on the last 50 meters. Hosszu had a half-second lead going into the final 50 before Belmonte split 30.65 and Hosszu split 32.72. The final margin didn’t indicate just how good of a race this was, but the splits and the video (which we will have after the session) do.

Hosszu took 2nd in 2:01.12 – still a marvelous swim for her and a new lifetime best and Hungarian Record by a full second.

Lost in the wake was Germany’s Franziska Hentke in 2:03.89 – just off of her German Record swim from last year’s European Championships.

Britain’s Adam Peaty re-broke his own British National Record in the 100 SCM breaststroke with a 56.43 in the semi-finals, which zooms him to 2nd in the world this year. That swim cleared his own 57.02 in prelims, and before that the mark was a 57.44 from Michael Jamieson set late last year.

There’s one potential surprise still sneaking around for Peaty though, who was half-a-second clear of the field in this semi-final. That swim ranks him only 2nd in the world this year, behind Brazil’s Felipe Franca. Franca was a 57.21 for the 6th seed in the semi’s.

Other than that, the biggest threat appears to be Russian 19-year old Kirill Prigoda, who was the 2nd seed in 56.93 – a Russian Record of his own.

Japan’s Yasuhiro Koseki, in 57.06, will swim on Peaty’s other side, and the defending silver medalist Damir Dugonjic is the 4th seed in 57.06.

Germany’s Marco Koch, historically one of the best short course breaststrokers in the world, missed the final with a 10th-place 57.47. The second American Brad Craig took 14th in 57.80.

Most of the world’s top pure backstrokers have skipped this year’s Short Course World Championships, but the three best in attendance all made the final of the women’s 100 back. Ukraine’s Daryna Zevina took the top spot in the semi’s in 56.23, winning heat 1 over the 2nd qualifier Emily Seebohm of Australia in 56.32.

Denmark’s Mie Nielsen is the 5th seed in 56.87, but is still a threat to take the gold in finals.

Also a threat is Hungary’s Katinka Hosszu, the defending champion, who was a measured 56.65 for the 3rd seed. Her Wednesday schedule shows three other races, all for medals, so it’s no surprise that Hosszu wasn’t going full-steam in this 100 back (whether by fatigue or control).

After Nielsen came Australian youngster Madi Wilson, part of a rookie nucleus at this meet that is performing very well for that country. Brazil’s Etiene Medeiros took 7th in 57.13, and another American slid into the 8th spot as Kathleen Baker was a 57.25.

The other American, also a high school senior, Amy Bilquist was 12th in prelims in 57.65. Canadian Hilary Caldwell took 14th in 57.88.

Defending champion Chad le Clos took the top spot heading into finals of the men’s 100 fly with a 49.25 in Wednesday’s semi-finals.

Most of the big names made it safely through, though only one of the two heats lived up to what it could have been. Australia’s Tommaso D’Orsogna took the 2nd seed in 49.69 out of the same heat as Le Clos, and the two were safely in front of heat 1.

Heat 2, however, led by American Tom Shields (49.91) was a much better battle with the top five finishers all placing just two-tenths apart.. For Shields, swimming in the same heat as Ryan Lochte (50.09 – 6th qualifier overall), that gives him a leg-up on the decision for who will swim the spot in prelims and who will swim it in finals on the American 400 medley relay later in this meet.

In the first matchup of the day between Mireia Belmonte and Katinka Hosszu, both swimmers were as good as they’ve ever been in the 200 fly, and Belmonte’s out-of-this-world swim was just too good.

In this 400 IM, Belmonte’s swim was again out-of-this-world, though in this case Hosszu couldn’t match her best.

The Spaniard swam a new World Record of 4:19.86, which once again by a full second broke the old record. That old record was a 4:20.83 done by Hosszu done in this same pool at the Doha World Cup stop earlier this year.

On this day, Hosszu could only muster a 4:22.94 for 2nd place. She once again led Belmonte for the first half of this race, but another big Belmonte closing kick did Hosszu and the record in.

American Elizabeth Beisel missed the podium in 4th place with a 4:25.56, followed by Japan’s Miho Takahashi (4:27.61) and the other American Caitlin Leverenz (4:28.74). Oddly enough, Leverenz, renowned for her breaststroke speed, was slower than all five of the swimmers ahead of her in the 100 meters of breaststroke.

The men’s 400 free relay final was an entirely different landscape in finals than prelims. Whereas in the morning, only two swimmers were better than 46.5 (and neither of them raced in finals); in the evening, it took a couple of 45’s or a lot of 46-lows to be in the hunt for a medal.

Manaudou’s 44.80 means he now moves within range of the 44.94 World Record belonging to Amaury Leveaux – which has stood since 2008 in the individual.

Meanwhile, the French had to come from behind (and even after Manaudou’s impressive split, they still were only 2nd) thanks to an explosive leadoff from Russian Vlad Morozov of 45.51. That broke the Meet Record in the individual 100 free. Joined by Sergei Fesikov (46.01), Danila Izotov (45.79), and Mikhail Polishchuk (46.87), the Russians were four-tenths behind in 3:04.18 for 2nd place. Everyone on that Russian relay swam very well, they just didn’t have an anchor to hold off France’s young star Metella. When Evgeny Sedov gets healthy for Worlds in 2015 and the Olympics in 2016, that won’t be a problem much longer for Russia.

The result is a rather soft Chinese World Record from 2010 that the Dutch women crushed in 7:32.85 – and even that doesn’t seem out of anyone’s immediate grasp with a stronger field.

Not to discount the Dutch swim – they had two fantastic legs, combined with two solid swims from women who are more sprinters than 200 freestylers. The splits:

Van Rouwendaal and Heemskerk were the two fastest splits of the entire finals field.

The Hungarians were 8th in prelims, but putting Katinka Hosszu on this relay for her 4th swim of the day pulled them all the way up to 4th in 7:39.21. Hosszu was a 1:53.13 on the anchor – she’s capable of better than that when fully rested, but after a brutal two-hour session, that’s a memorable effort.

The defending champion Americans took 5th in 7:39.48. Their splits:

The Americans have now medaled in this race in just 6 out of 12 all-time short course World Championships.

Japan took 6th, Sweden was 7th, and Russia was 8th.

Ugh, I don’t have the “Sports Pass” so I can’t watch it on USN! 🙁 Anyone have the stream link for the Brazilian site?

Play by play of the 2free?

While it’s not as good as live, we will have full archived videos after the session ends.

For anyone who has Directv, Universal Sports is currently in a free preview period December 3-12 over the dish:

Got it, thanks! Crazy pop-ups!

actually lochte did not pass anyone in the last 25. he made a move between 125 and 175 to take the lead, but got passed both by le clos and izotov.