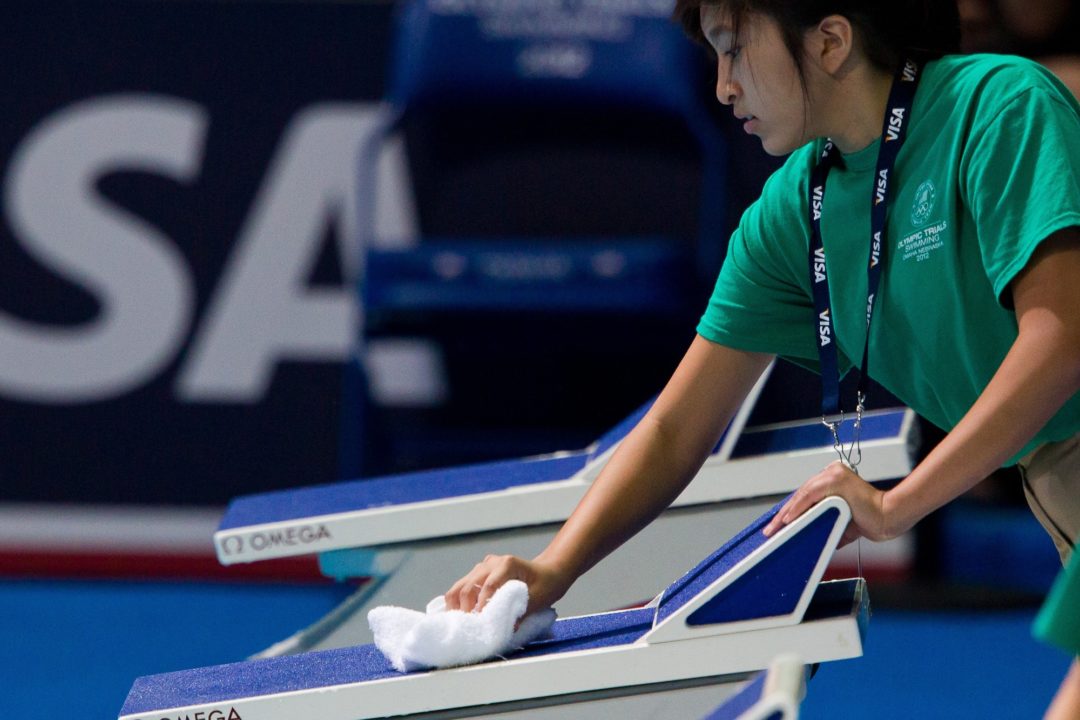 It's that time of year again, when teams start resting up, shaving down and digging out the fast suits. Here's a listing of conferences, with competing teams, dates, location and some information on the rivalries to watch in Division III this season. Current photo via Tim Binning/TheSwimPictures.com

Here’s a breakdown of the upcoming schedule for the conference championships in the major Division III conferences. If you can fill in the blanks on any of the live results or live video, please leave them in the comments! Bookmark this page: information will be filled in as it becomes available.

You can check out the rest of the NCAA Conference previews in our Division I and Division II primers.

Quick Hit: For the first time, the venue for the NCAC Swimming & Diving Championships has moved to Denison’s new pool. The facility, which first opened in the 2012-13 season, is new enough that lots – if not all – of the pool records should fall during the competition, leaving every victory with a space on the record board. Besides just that, the Kenyon-Denison rivalry will be at new heights, competing in the Big Red’s home pool, rather than at a neutral location like Canton. Finally – the last time I was here, the Big Red’s blocks were numbered backwards, so it’s possible if you’re watching the live feed that your swimmer may not be in the lane you think.

Quick Hit: The Bluegrass Mountain Conference is unique in that it has three different school divisions competing: Division III, Division II and NAIA. JHU was runner up last year for both men and women, but with how fast their team is moving this year, it’s possible that there could be an upset on the line, with the Jays taking the top spots on both sides.

Quick Hit: The Eagles will have the home field advantage in the UAA conference championship. Not that these guys need any advantages to swim fast. The Eagles have really stepped up their performances in this second semester edging towards NCAAs, and should continue to impress, despite the fact that most of the athletes with decent chances at the NCAA meet probably will not be fully rested for this meet. A bunch of Eagles – especially on the women’s side – will be trying to make the 18-spot team, too, which could prove interesting.

Quick Hit: There are a lot of storylines worth watching in this conference. After the tie in the women’s 500 last year, who’s taking home the gold this season? Will Hope’s women catch up with Calvin’s Lady Knights, or will this become the 10th year of victory in a row? Will Kalamazoo break into the top three this year after some stellar performances through the 2013-14 season? What’s going to happen on that 800 freestyle relay? Hope has the freshman with the fastest incoming time in MIAA history, Albion hasn’t lost any studs from their upset team last year, and Calvin has the fastest midseason time and still is improving.

Quick Hit: Westminster and Saint Vincent have a decent number of top athletes who are sitting on top of the conference standings currently, with the possibilities of delivering on individual titles at the PAC championship. However, Grove City has a hefty depth to their team, and some starling freshmen (like Megan Smith). What will also be fun to watch at this meet are the relays with chances at qualifying for the NCAA championship after conferences.

Quick Hit: The defending champions will certainly be the ones to watch this year. Nitz has been a force to be reckoned with since she came on the scene in DIII last year, and this year, with another year of experience, as well as another year of training, it will be interesting to see what times she puts up, and what events she swims at the CCIW champs.

Quick Hit: One of the smallest conferences, the OAC has one heavy favorite for victory in the championship season. Ohio Northern has had swimmers going fast all year, and it shows: in a top 20 of the conference, about high number of those athletes are from ONU, and most of them seeded high on the listing. These men and women have the depth, and it will be fun to watch them go fast all weekend long. Last year on the women’s side John Carroll was very close in the point standings (17 points behind to be exact) with Mount Union 13 points behind them. There could be some serious shake up for an upset this year if the Blue Streaks or Purple Raiders step it up.

Quick Hit: Just with a quick glance over a top 25 list for the MIAC, it’s clear that St Olaf has the most men ranked in top eight across events. That’s going to give them some serious points at conference, but since they’re also trying to rack up NCAA qualifiers, there could be some interesting decisions about who to place in what event, and since St Olaf also has some of the most versatile athletes (like Tanner Roe, who is top 3 in freestyle events from the 50 to the 500, as well as both IM events and the 100 fly). It looks similar for Gustavus on the women’s side, with athletes like Alissa Tinklenberg (50 to 500 free, and backstroke) having to make choices in events based on conference points available as well as NCAA qualification.

Quick Hit: By all accounts, Whitworth’s women were on fire last year to rout Puget Sound for the crown at the championship. The question this year is whether they can repeat the performance and back-to-back with their wins – and since they only lost one scoring senior (Melissa Barringer), it’s very possible. For the men, with a winning streak crossing the past 11 years, victory may seem easy to come by, almost expected. Certainly it’s seems likely, but Whitman was less than 100 points behind last year, and they have Karl Mering – enough to make a difference? Time will tell.

Quick Hit: The NESCAC has a separate meet for the men and the women. The women’s meet will be first, showcasing the current national caliber talents of the NESCAC, like the Ephs’ Sarah Thompson and Megan Peirce. With how strong the Ephs have looked this year, it seems a given that the women will wrest back their crown from Amherst. On the men’s side, it looks to be a battle in the trenches for position. Williams and Amherst should be in the thick of things for the crown, with Conn and Tufts duking it out for third. No matter what place, expect scrappy fighting for every point and touch out!

Quick Hit: With the loss of only three key seniors and a host of freshmen ready to make up ground, Stevens seems set to take the crown for the UNYSCSA championships again this year. On a current top 25 for the Empire 8 conference list, Stevens has the top athlete in almost every individual event, with liberal sprinkling of teammates through the top eight. Ithaca has a heavy top sixteen presence, with the potential to move up in the standings and keep the meet a close race. For the women, the meet looks like it will have champions sitting out far ahead of everyone (athletes like Brittany Geyer) with dogfights for runner up and third places.

Quick Hit: After the upset by the Cortland Red Dragons at SUNYACs last year (ending a championship drought that’s been on since 1998), it’s a question of who is going to come out on top this season. The Red Dragons lost several very valuable seniors who made up a good chunk of their relays and took top spots individually. Geneseo’s men have done well, but nothing lights-out impressive to put them as clear favorites to take back the title this year. The Geneseo women, on the other hand, have demonstrated that they have what it takes to keep their streak going this season.

Quick Hit: MIT has been in good form throughout the season. The championship season shouldn’t see any changes in that. After winning the NEWMAC championship last year by almost 600 points, it’s nigh impossible to rationalize having a different favorite for the meet, even with the graduation of the impressive Wyatt Ubellacker.

Quick Hit: Besides taking place in the best swimming facility in Wisconsin, the WIAC will also showcase the talents of some national caliber swimmers, including Amy Spaay, who took home Whitewater’s first individual national title in the 100 breaststroke at last year’s NCAAs. On the men’s side last year, the meet was the closest it’s been since 1983, separating the champion Stevens Point from the runners up La Crosse by a bare 10 points. It looks like it’ll be another close year, and one to keep spectators on the edge of their seats.

Quick Hit: Ursinus’ 2013 win was an upset of the women’s defending Gettysburg champions. The Ursinus men ousted Dickinson from their runner up finish as well, and with the finishing scores so close (11 points between Champions and Runners Up for women; 24 between Runner up and third for men).

Quick Hit: CMS has been on all year, and they haven’t lost yet to anyone inside the conference. With the championships coming up, that does not seem likely to change any time soon. The women’s scores last year were much closer than the men’s. Is this the year for Pomona-Pitzer to snap the Athenas’ winning streak? It seems unlikely that the more than four hundred point difference between CMS and Redlands is a gap that will be bridged – but that’s why we have the races, instead of just writing about them.

It would be nice to see a preview for the Middle Atlantic Conference.

For Michigan: Hope does NOT have a freshman with a time that is the fastest in conference history. Fastest incoming time, but all time is a couple seconds away.

Thanks for the clarification. Updated accordingly.

Thanks!! Keep up the great work!