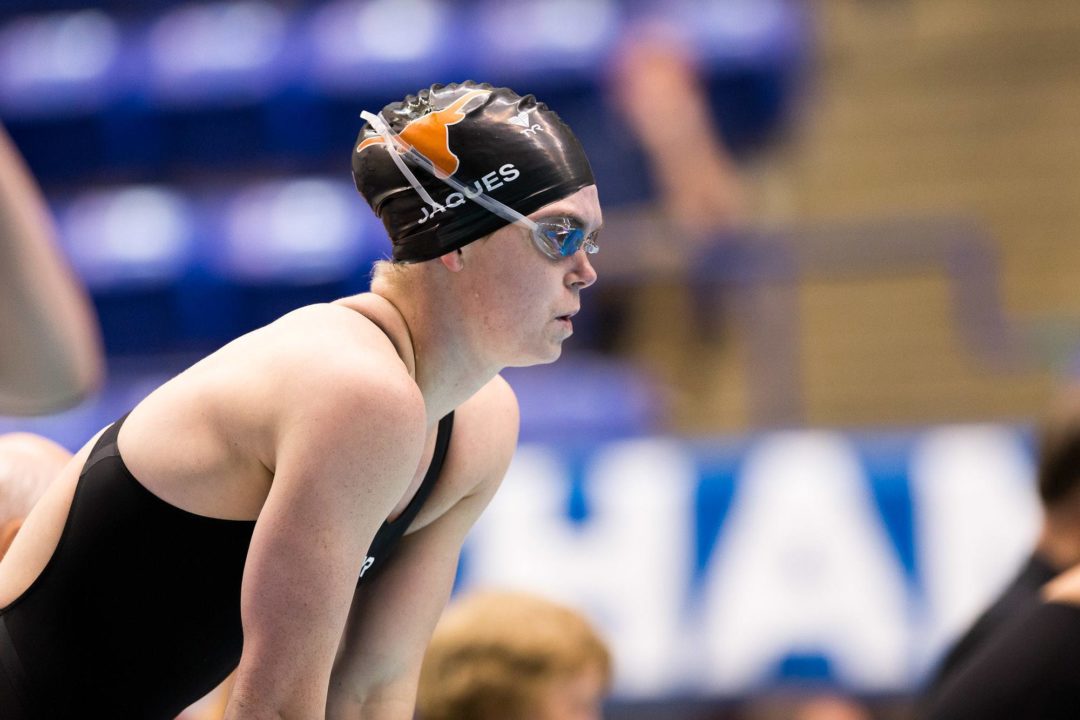 Texas' Gretchen Jaques could be the star of the Big 12 Championships, and depending on her entries could walk away with three individual titles Archive photo via Tim Binning/TheSwimPictures.com

The Big 12 title is still going to be won by the Texas Longhorn women this year, but the rest of the conference, slowly-but-surely, are building teams that should chip away at the seas of burnt orange that occupied the A-final last year.

For example, in the women’s 100 free last year, Texas had the top 7 swimmers in the Big 12 going into the conference championship meet. This year, they’ve only got five of the top seven. It’s small progress, but progress none-the-less, and progress that is maybe equally as important to other teams taking event wins.

So, while Texas is going to dominate the team scoring, fans of their opponents from Iowa State, Kansas, West Virginia, and TCU will all have enough to watch to make this meet worthy of tuning-in.

That includes the TCU women, who thanks to a snowed-out event against the Longhorns completed a perfect 3-0 dual meet run in the Big 12 this season with wins over Kansas, Iowa State, and West Virginia by an average margin of 38+ points.

Kansas – Chelsie Miller (sophomore distance/fly/IM’er), Alison Lusk (breaststroker), Yulduz Kuchikarova (freshman backstroker) – If you have “passed” on following the Big 12 regular season, you’ve missed out on a really special swimmer in Chelsie Miller from Kansas. She was a 4:08 in the 400 IM at Winter Nationals, which is six seconds faster than she was at last year’s Big 12 Championship meet.

TCU – Lyndsie Gibson (sophomore backstroker), Ali Bleasdell (junior butterflier), Julia Sanders (freshman sprinter) – Not sure how many event titles the Horned Frogs will win, but they showed in the dual meet season that they’re the deepest of the non-Texas teams in this conference.

Texas – Ellen Lobb (senior sprinter/butterflier), Sam Tucker (senior freestyler), Tasija Karosas (freshman backstroker/IM’er), Gretchen Jaques (junior sprinter/breaststroker/butterflier/IM’er), Maren Taylor (senior diver), Murphy Bromberg (freshman diver) – This Texas women’s team will have their focus beyond Big 12’s, but they are a very good, and very deep team. They’ll have a few decisions to shore up at this meet – including what to do with the impressively-versatile Gretchen Jaques.

West Virginia – Julie Ogden (junior butterflier), Jaimee Gillmore (sophomore sprinter), Courtney Parenti (junior springboard diver) – the Mountaineers were the only team besides Texas to send swimmers to (and score) at NCAA’s out of this conference last year, but both of those scorers have since graduated.

There’s not a ton of great intersquad battles at this meet, but there are a few, and some very good intrasquad races between the Texas girls as well.

100 breaststroke – Iowa State’s Imelda Wistey has already demolished the school record books in this 100 breaststroke, along with her similarly-named, similarly-aged, but unrelated teammate Emily Wiltsie. If the Longhorns decide to use Jaques here, Wistey might be just close enough to give her a run (the Cyclone swimmer likely is in to NCAA’s with a 1:00.46, but dropping a tenth-or-two at Big 12’s could help her case a lot).

400 IM – We don’t know what Miller might do at this meet, because her level in the 400 IM is unprecedented for Kansas’ program. If she goes after it, though, she’s the top seed in the 400 IM, and will battle Texas’ Kaitlin Pawlowicz and Madisyn Cox for the conference title. Also watch another great battle of Miller versus Texas’ Kelsey Leneave in the 200 fly.

100 fly – Texas’ Ellen Lobb has been up-and-down this season, but at the end of the regular season was firing on all cylinders, including beating defending NCAA Champion Margo Geer in a dual meet a few weeks ago in the 50 free. In the 100 fly, she’ll challenge fellow Texas senior Lily Moldenhauer, who has surged this year as well;  West Virginia junior Julie Ogden is also in the hunt. (Note: Gretchen Jaques, the fastest swimmer in the Big 12 this year, is overentered on the Big 12 psych sheets, but this 100 fly is not one of those entries.

This one is going to be all Texas – not much mystery about number one. Things get a little more interesting after them, though. We’ll give the edge to TCU based on their sweep of the other three teams in the regular season for the 2nd position (they were 2 points behind West Virginia last year for that spot). The 2-5 positions were very close last year, so expect a good team battle after #1.

Yes – no doubt it will be all Texas versus what’s left of the Big 12. Besides the Texas swimmers, only Wistey and Miller appear to be certain for NCAAs.

However, Texas appears to have only 6 individual swimmers (Tucker, Jaques, Cox, Pawlowicz, Moldenauer, Karosas) that are locks to make NC’s with the their times coming into this meet. So they will need others like Lobb, Leneave and Hooper to improve some marks if they want to be assured of adding to their numbers.