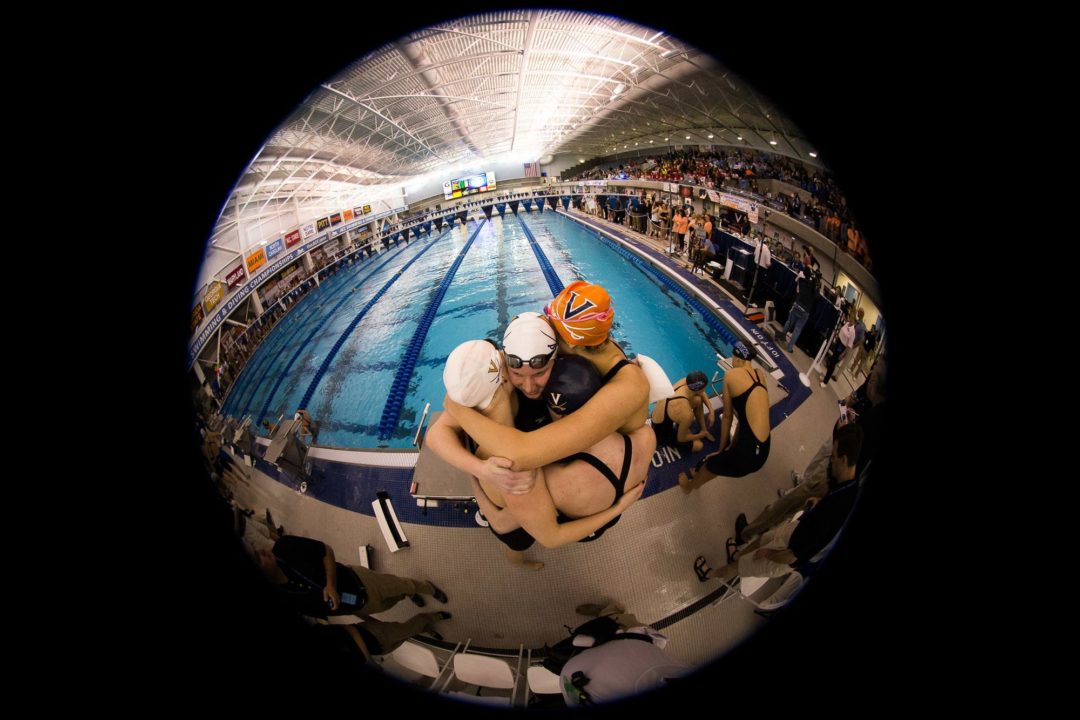 The Virginia Cavalier women crushed the ACC Record in the 400 medley relay on Friday night by three seconds. Current photo via Tim Binning/TheSwimPictures.com

The Notre Dame junior blasted five seconds off her prelims time to put up the fastest 200 breaststroke in NCAA history at the ACC Championships.

Stephanie Peacock fell ill at the end of her 1650 at the ACC championships, leaving the pool on a stretcher after breaking the NCAA record in the 1000 free.

The Virginia women, in their quest for a 7th-straight ACC title, have taken a commanding 150-point lead over second-place North Carolina State headed into the 3rd day of competition in Greensboro. Behind them, though, there’s an absolute battle for 2nd, with NC State, Florida State, and North Carolina separated by only a total of 16 points.

In prelims, Notre Dame’s Emma Reaney, in her team’s first championship meet in the conference, broke both the ACC Championship and Conference records with a 59.09 in the 100 breast. Virginia freshman Laura Simon was also under the old Championship Record in 59.35. That’s one of a handful of records that could, or should, go down again in finals.

Prelims recap can be read here.

The Virginia women not only broke the ACC Record in the 400 medley relay to begin Friday’s finals session, they obliterated it. The Cavaliers swam a 3:29.94 to beat Notre Dame by four seconds, and take the conference record by almost three seconds. Every single swimmer on the relay swam out-of-her-mind fast. The splits:

What’s scary about that time is that they still have the chance to get much, much faster at NCAA’s. That’s because Bartholomew herself has been more than a second better than that lead-off time in the 100 back this season. The most exciting leg was Lloyd’s anchor, as she’s filling in for the now-graduated Lauren Perdue there, and doing so very well.

For comparison, it took a 3:28.5 to win NCAA’s last year, and with a blazing Stanford medley, expect a similar winning target this season.

Notre Dame, thanks to a 57.7 breaststroke split from junior Emma Reaney, took 2nd in 3:33.93: four seconds behind; and Virginia Tech was 3rd in 3:35.45, including a 53.3 fly leg from freshman Maggie Gruber to admirably fill the Hokies’ biggest hole on their medley.

Each of those top three teams graduates only their anchor leg at the end of this season.

In the collegiate schedule’s most grueling events (400 IM, 200 fly, 1650 free), the North Carolina women are at their best, and in the first of those three on Friday, the 400 IM, they showed just how good they are.

The Tar Heels went 1-2 in both the A final and the B-final to leapfrog into 2nd place after ten events. That was led by senior Cari Blalock, who took the overall title in 4:08.96, and sophomore Emma Nunn, who was 2nd overall in 4:10.86.

Notre Dame freshman Katie Miller, who just wasn’t quite as good on her breaststroke as her UNC counterparts, was 3rd in 4:10.92.

The 100 fly turned into a two-swimmer showdown at the front between Virginia’s Ellen Williamson and FSU’s Chelsea Britt. Williamson closed hard to knock off the freshman Britt at the wall 52.19 to 52.35.

Duke’s Lauren Weaver was a solid third, with NC State’s Zina Grogg just behind. UNC’s Meredith Hoover took fifth – she was one of three Tar Heels in the A final, but in a big points blow, one of them, Hannah Lincoln, was DQ’d for a 15-meter violation.

Virginia Tech freshman Maggie Gruber was sixth before UNC’s other swimmer, Hellen Moffitt, a freshman herself.

The B final saw 5 more women go under 54, with Miami’s My Fridell leading the way.

The 200 free set up a head-to-head battle between UNC and Virginia, the top two teams so far this week. Tar Heel junior Danielle Silverling swam an outstandingly patient race, going out two tenths behind Virginia freestyling star Leah Smith and then passing Smith in the back half to win 1:44.43 to 1:44.79.

Virginia also took third place with Caroline Kennedy‘s 1:45.65 – she won her own UVA-UNC touchout over the Tar Heels’ Stephanie Peacock.

Those two teams dominated the final heat. Viginia’s Hannah Borgersen was fifth and UNC’s Allyn Hardesty and Lauren Earp swept the next two spots. The only other team represented in the A final was Florida State, with 8th-place Kaitlyn Dressel.

After two swimmers broke the ACC record in this morning’s prelims, the same two got under the new mark tonight. Again it was Emma Reaney of Notre Dame who will go home with the record, going 58.46 to smash another half-second off her prelims mark. Virginia’s Laura Simon went 58.96, also getting under Reaney’s prelims mark.

Virginia Tech’s Weronika Paluszek joined them under a minute, going 59.95 for third.

Also notable was Virginia Tech freshman Taylor Ellis from the B final. She really broke through at night, going 1:00.87 to win the consol heat by a half second.

The night wrapped up with the 100 back and one more meet record. Virginia sophomore Courtney Bartholomew went 51.50 to easily run away from the field. Most impressive was probably her back-half split of 26.15, far and away the best of the A final.

NC State freshman Alexia Zevnik went 52.85 for second, just ahead of a pair of seniors, UNC’s Carly Smith and NC State’s Zina Grogg. From there the field bunched up considerably. FSU’s Bianca Spinazzola was fifth in 53.37, Virginia’s Charlotte Clarke was just .05 back, and then a pair of Florida State Seminoles – Chelsea Britt and McKayla Lightbourn – followed a tenth after that.

Great performance for Miss Reaney in the 100 breast.
But also for Laura Simon. 58.97 is a very nice time for a freshman.

I have the feeling that Courtney Bartholomew, unlike many other swimmers, keeps the best for next month and the NCAA championships. When it counts.