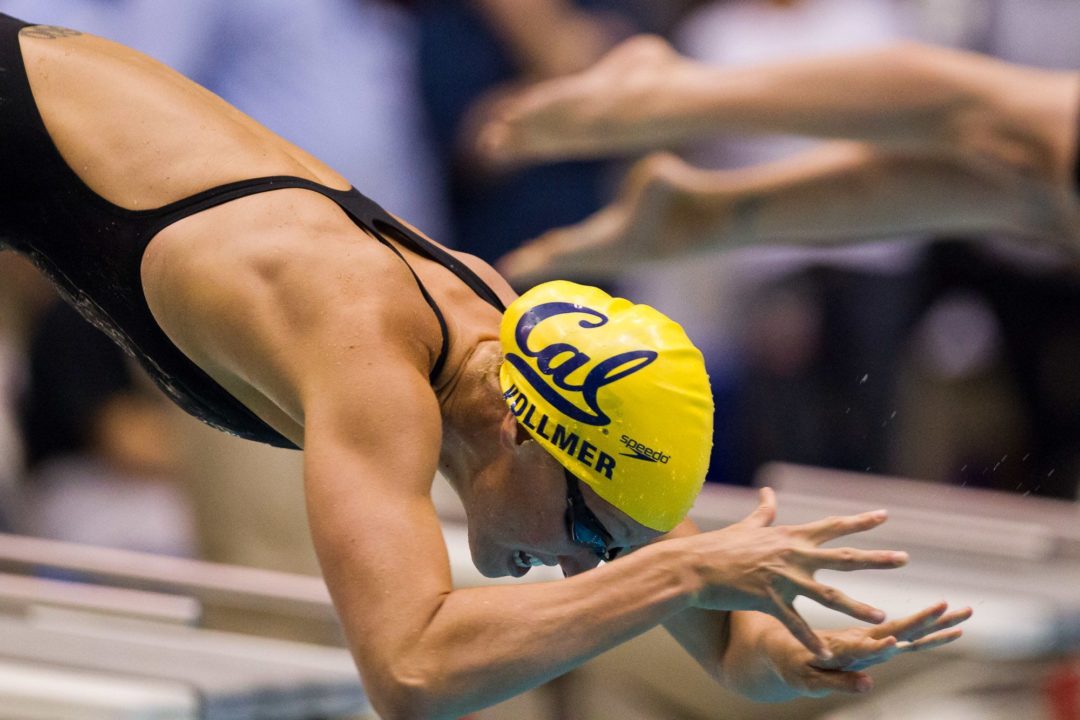 Dana Vollmer may only be training singles, but that should still be good enough to win at this year's World Championship Trials in the 100 fly. (Photo: Tim Binning/TheSwimPictures.com)

Since the 2012 London Olympics, Dana Vollmer has had some distractions, like all Olympic Champions and World Record holders do. There were hometown parades, some PR and marketing trips, and the decision to only train singles this year headed toward the World Championships.

Still, it seems to be a matter of just continuing to push her training out for the full 100 meters, as she’s still opening very well (right around 27.0 this year). The reality of the situation is that even not at her best, she was still half-a-second better than her fellow Olympic representative Claire Donahue at this year’s Charlotte Grand Prix. Barring disaster, she should be in the top two for sure, and almost definitely the champion, at this summer’s World Championship Trials.

Behind her, though, there will be quite an interesting battle for the second roster spot. Claire Donahue is the defending owner of that spot, after making the Olympic final and finishing 7th at the Games last year. She’s had some down-time too after surgery in January on her appendix and an ovarian cyst, but her year-over-year times at Charlotte were basically identical – even down to her split at the 50.

Assuming that’s not a false positive, history dictates she’s the favorite to take that second spot, especially with the two next-fastest swimmers at last summer’s Olympic Trials, Kathleen Hersey and Elaine Breeden, seeming to be done for now, at least. Coughlin won’t be swimming the 100 fly either, meaning that at least three Trials finalists are out.

Christine Magnuson has confirmed that she will be swimming this race (along with the 50 fly and 50 free). Since winning silver in this race at the 2008 Olympics, she has focused a lot on her 50 freestyle, where she’s made significant improvements. Her 100 fly is still very good though: she was a 58.60 at Trials last year, and went out right with Vollmer at the turn. Magnuson’s best shot at making the team might be the 50 fly, but with times probably being deflated across-the-board in this 100 for the reasons mentioned above, as well as others, she’s within striking distance.

The other two returning finalists are recent-collegians Kelsey Floyd from Tennessee and Caroline McElhany from Texas A&M.

Floyd has been dealing with some very scary health issues, but has been cleared by doctors to compete this summer at World Trials and either the World University Games (for which she’s already qualified) or on the World Championships team. She didn’t have the best NCAA Championship meet of her career as a senior in 2013, finishing just 11th in the 100 yard fly (against a very deep field). She kicked off her long course season at the Grand Prix in Charlotte, where she was a 1:01.9 in finals.

McElhany, who saw her career resurge after transferring to Texas A&M, was also off at NCAA’s: she finished only 18th in the 100 fly despite coming in with a very high seed.

Looking outside of finals, there’s plenty of swimmers who could not just make the top 8, but possibly steal a roster spot as well.

There’s a group of swimmers who didn’t have their best swims at last year’s Olympic Trials, who could have an impact if they get on track. That includes Cal sophomore-to-be Kelly Naze, who was a 58.79 when she was just 16 back in 2010. Auburn’s Olivia Scott is the defending NCAA champion, and despite coming up just shy of a lifetime best in long course last year, still managed to finish 10th at the Olympic Trials.

USC’s Kendyl Stewart had a phenomenal freshman season in the NCAA. Both her long course and short course times stalled out before joining Dave Salo’s squad; at the Olympic Trials, her 100 meter fly was more than a second away from her best time.

As a freshman, however, in yards, she made a big leap at the Pac 12 Championships with a 51.3. If she can now knock a second off of her best meters time to match it, she’s in the hunt for Barcelona.

Lousiville’s Kelsi Worrell had even bigger improvements as a rookie, and since placing 4th at the NCAA Championships, has broken a minute for the first two times of her career in the 100 meter fly.

PASA/USC freshman Jasmine Tosky didn’t have a very good Olympic Trials meet overall, but the exception was the 100 fly, where she was a lifetime best of 59.01. Her focus at this meet will probably be in taking a spot in the 200 fly, that’s looking awfully thin at the top, which is the race she swam at the World Championships in 2011.

Rachel Bootsma really worked on her butterfly in her freshman season at Cal, and placed 2nd at the NCAA Championships, but the 2012 backstroke Olympian has still never broken a minute in the 100 meter fly. The yards performance was based a lot on how good she is underwater, but her best shot at Worlds is back in the 100 backstroke. Note that the 100 fly is on a double before the 50 back, where Bootsma has World-Championship-medal potential if she can make the team.

Erika Erndl is the veteran of the crowd, and even at 34-years old swam a lifetime best of 58.75 at last summer’s U.S. Open. Along with 2008 Olympian Kim Vandenberg, there are two potential finalists who would be in their 30’s by the time 2013 ends.

There’s a whole lot of swimmers who are in the 59-mid range. The two we’ll highlight are Michelle Cefal from Oregon, a 16-year old who is the defending Junior National Champion in the 100 and 200 meter fly, and she’ll come in seeded at a 59.31.

The other is 15-year old Katie McLaughlin, a high school swimmer from California. She’s a better swimmer in long course than in short course, and is early on one of the top recruits of the class of 2015.

Those we’re assuming  are retired, or at least not competing in this event this year, because of public statements, lack of competition, insider knowledge, their personal confirmations, etc: Jenny (Connolly) Hanselmann, Alex Forrester, Mary Mohler, Lyndsay DePaul, Natalie Coughlin, and Amanda Kendall.

Dana Vollmer is the logical favorite to win these trials. However, I don’t see her as favorite this year in Barcelona. Claire Donahue is a logical pick for the second place but I also see Kendyl Stewart to push her very hard. Jasmine Tosky is still a big question. This event needs new names in USA. For the future I will watch 18-year-old Kelsi Worrell, 16-year-old Michelle Cefal, 15-year-old Katie McLaughlin and 13-year-old Cassidy Bayer.

I am waiting until the trials, but I still see Dana Vollmer the favorite to win gold in Barca.

Me too ! She has one of the most technicaland beautiful stroke on butterfly ; efficient and powerfull at the same time . I bet or her for Barça this summer .

I have just little doubts on her capacity this year to swim 3 fast races in a row in 2 days. If she swims 56 high in final in Barcelona she’s vulnerable.

“Dana Vollmer may only be training singles, but that should still be good enough to win at this year’s World Championship Trials in the 100 fly.”

Assuming doubles are a necessity for elite level success….

True… must have gotten mixed up with the fact that she swam/swims club for Palo Alto Stanford Aquatics (PASA). Tosky is training there this summer, representing both PASA and USC

Jasmine Tosky has trained in PASA for a long time before heading to USC.