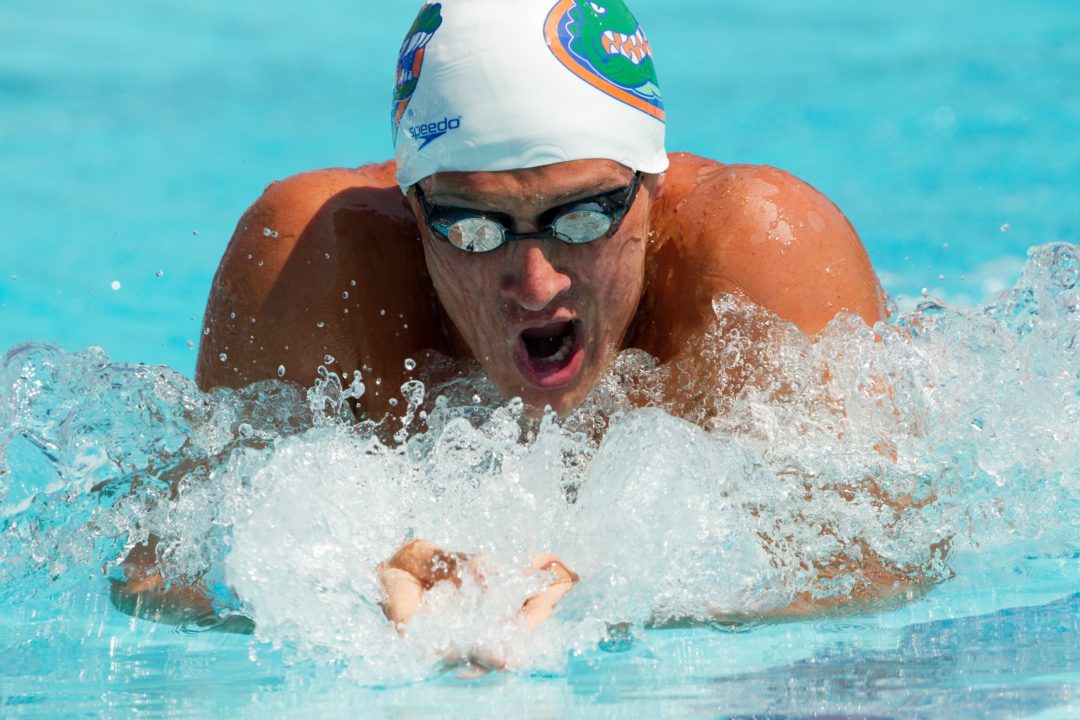 Ryan Lochte should take first in the 200 IM at World Championship Trials. The real question: who will grab the second spot?

The Americans won the most medals by a nation at any World Championships in history and Oleksiak became the most decorated Canadian World Champs swimmer.

Although the general public might not think so, certain facets of the swimming world are significantly more interesting now that Michael Phelps has retired.  Instead of virtually writing in his name on the Team USA roster before a selection meet even occurred, the vacancy left by Phelps has made the IMs a far more attractive event choice for those in contention for roster spots.  Even though Lochte looks to have one of them on lockdown, the [likely] battle for second will be one of the more intriguing story lines of the meet.  Top-ten finishers Tyler Harris, Peter Vanderkaay, and Austen Thompson look like they’re done for now.  Can Conor Dwyer continue to make the leap forward in the IM events?  Will upstart youngster Chase Kalisz use his patented late charge to steal a Worlds birth?  Will David Nolan transfer things into the long course tank?  What can Tyler Clary drop in the 200 distance?  Stay tuned, let’s dive in.

The consensus favorite is the current world record holder/two-time defending World Champion Ryan Lochte.  Picking Lochte to book his ticket to Barcelona in the 200 IM is about as close to a “sure thing” as you can get.  With Phelps out of the picture, Lochte is light years ahead of everyone else in the world in the shorter IM.  Barring any severe misfortune (a DQ, injury, etc), you can count on him representing Team USA at Worlds.

His closest challenger internationally is probably the up-and-coming Kousuke Hagino of Japan, who became just the third swimmer to ever crack 1:56 in a textile suit earlier this year.  He still has a ways to go, however; Lochte’s best is over 1.5 seconds faster than the Japanese teenager, and he been faster than Hagino’s best ten times throughout his career, including seven different occasions in a textile suit.

…Or the closet thing Lochte should have to one is fellow Gator alum and former training partner Conor Dwyer, who finished third at the 2012 Olympic Trials in this event.  After exploding onto the freestyle scene during the 2010 NCAA season, Dwyer began flirting with the IM events in his senior campaign at the University of Florida.  Although the mid-distance frees were his primary focus at Trials last summer (for good reason; he qualified in the 400 free and 800 free relay), the wide-open second team spot and friendly event order (no conflicts for him) are conducive for Dwyer to make a run here.  He has (temporarily? permanently?) relocated to train with Bob Bowman, and while he’s had pretty good success so far (he’s put up a number of in-season bests since making the switch), we won’t know anything until taper time.

Texas Longhorn Austin Surhoff dropped over a second last summer to finish just behind Dwyer in this event.   The 2010 NCAA Champion followed that up with a great senior season, topped off with three A-Finals at NCAA’s in March.  Although he “only” finished fourth in Indianapolis in this event, Surhoff actually had a personal best for the first time in three years, cutting a half-second off his previous best time.

The 200 is a bit on the shorter side for Chase Kalisz, but if he has enough speed to stay close through the first 100, don’t count him out.  The Georgia freshman/NBAC product has a superb IM back half, and he’s made running down the field his calling card.  He finished fifth in Omaha a year ago, but has already matched his lifetime best this season while winning this event at the Charlotte UltraSwim, clocking a 1:59.66.

After a subpar 2012, David Nolan rebounded from what was widely viewed as a disappointing freshman campaign and summer season in a big way at NCAA’s this March, winning two events and placing second in a third.  He hasn’t competed much this spring (a logistical error kept him out of the Santa Clara Grand Prix), but after a bit of uncertainty and doubt last summer, Nolan is doing all the right things to put him in contention for a World Championship team birth.

With the retirement of Phelps, it will be interesting to see if Tyler Clary tries his hand over the shorter distance, as well.  He had some success with this event in his collegiate years at Michigan, but he put this event aside for a couple years.  Who can blame him?  Phelps and Lochte had the stranglehold on the event, and the Olympic schedule would have made this a tough double (same day as the 200 back).  This is probably just his fourth best event overall (behind the 400 IM, 200 back, and 200 fly), but it will be his last event of Trials, so he’ll get a clean, conflict-free chance if he wants to give it a shot.

The last two returning Trials finalists have competed against each other plenty over the past three years: Kyle Whitaker of Club Wolverine, and Cody Miller of Indiana. While Whitaker, a Chesterton, Indiana native, has been near the top of the ranks since he arrived in Ann Arbor, Miller has improved drastically each of the last three seasons, overtaking his conference rival to capture the 2013 Big Ten title and finish third at NCAA’s (Whitaker finished seventh).  With some good fortune (Miller was scratched into the final when Peter Vanderkaay elected to drop the event), he finished one spot ahead of Whitaker in the Olympic Trials final a summer ago, swimming a lifetime best 2:00.90 in the process.

There are a few younger guys to keep an eye on, but the one with the best odds of making waves is Josh Prenot.  The rising Cal sophomore was a semifinalist last summer, but really kicked it up a notch in his first year with the Bears.  Prenot was a triple A-Finalist at NCAA’s, including his fifth place finish in the 200 IM, where he recorded one of the fastest times ever for a college freshman (1:42.62).

A couple others to look out for, including their lifetime bests:

–Michael Weiss (2:01.95) of Wisconsin had a huge breakout season this winter.  Look to see if it translates.

And now for the picks…

Lochte will probably swim a very solid 200 IM ( Close to His OWN WR ) He is the world record holder of the 3 different IM’s In short course and he had a very good Santa Clara meet 10 days ago . 2 spot , hard to predict here . 3 or 4 guys will be fiercly competing for it .

Lochte as big favorite (perhaps a WR for him in Barcelona) ahead of Tyler Clary. Chase Kalisz third. Among the youngsters, Gunnar Bentz and Andrew Seliskar are the guys to watch.

So Gunnar Bentz’s best time is a 2:00.7 which he set at Junior Pan Pacs this past summer, but it didn’t count because of a ridiculous disqualification. Look for him to drop the hammer in Indy.

I believe he went 2:00.1, not 2:00.7. It was faster than Phelps NAG record in any event. Considering he dropped 2 seconds sc, he definitely could surprise a lot of people with a breakout swim.

and by “in any event” I meant the expression, not literally in any event in swimming

Good point… missed that one in my predictions.

Clary has been 1:57 in the 200IM, faster than anyother person in the field other than Lochte, and that was 2 years ago. He has significantly improved in his other events, particularly the backstroke, his strongest. I would be shocked if he doesnt get the second spot. Wouldnt surprise me to see him go 156low.

I think Kalisz will suprise everyone for that second spot. The guy has an explosive back half (although Ryan Lochte’s breaststroke has looked great the past couple of years).