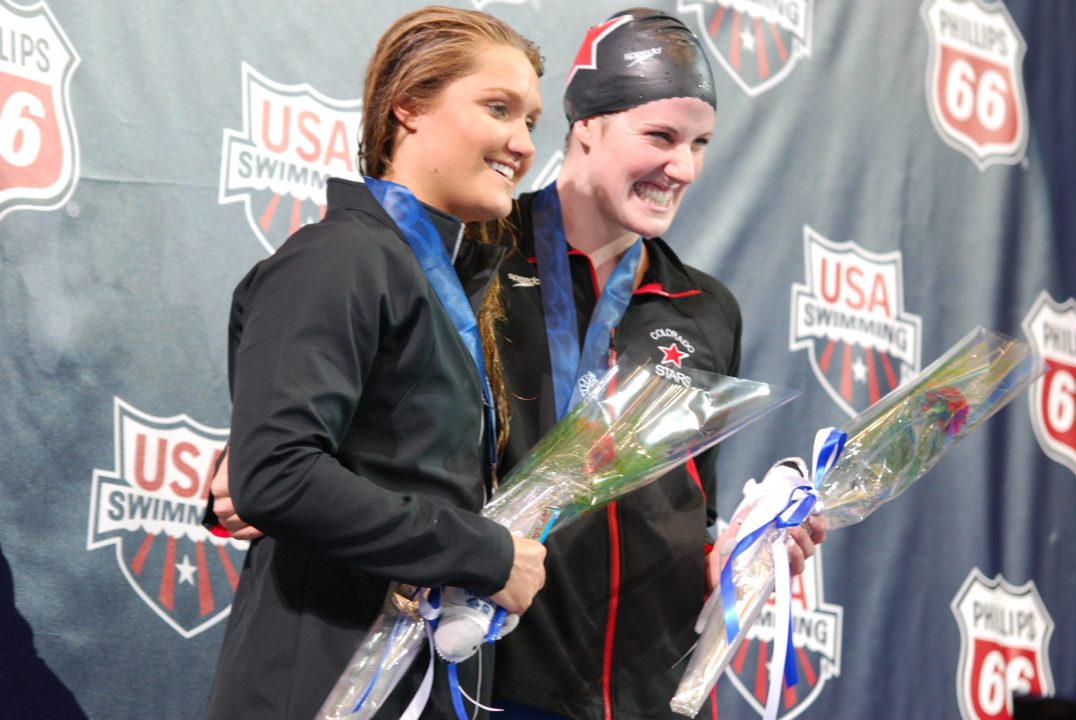 After years of carrying on a friendly rivalry in the long course pool, Elizabeth Pelton and Missy Franklin will team up in an effort to bring the NCAA title back to Berkeley.

Ball State Gets First MAC Win Since 2016 vs. Toledo

The Ball State women earned their first MAC conference win since 2016 as they took down Toledo in dual meet action on Thursday.

Despite winning multiple individual events and finishing second as a team NCAA’s, the 2012-2013 season left Cal wanting more.  After looking a bit flat in a surprise third place finish at Pac-12’s, we were expecting Cal to light up the pool at NCAA’s with the same monster taper they have had over their previous four seasons where they came with three team titles.  Even with some great individual efforts, the Bears didn’t have enough top-to-bottom to compete with Georgia.  Regardless of the rumors of sickness, even if this Cal squad was 100% “on”, Georgia would have been tough to beat.  The Bulldogs controlled the meet from the get-go, putting up 56 points in the first individual event and never looking back.

There were plenty of great moments for the Bears, however.  They went 1-2 in the 200 IM at both Pac-12’s and NCAA’s (courtesy of Caitlin Leverenz and Elizabeth Pelton), Rachel Bootsma was crowned NCAA champion in the 100 back, and Elizabeth Pelton crushed the American record in the 200 back.  In addition, head coach Teri McKeever got some great performances from a number of future stars, including Rachael Acker and Melanie Klaren.

Considering this class contains three World Championship finalists (Marina Garcia, Farida Osman, and Sophia Batchelor), one of the top sprint recruits from the last decade (Kristen Vredeveld), and one of the best all-around swimmers (Celina Li) in addition to best swimmer on the planet (Missy Franklin), it’s no surprise this is the number one ranked class in the country.

How good is this class?  The number crunching was pretty quick, but based off of their best pre-collegiate times (we had to include conversion for Osman and Batchelor, but we were pretty conservative), this class would have placed eighth as a team last year at NCAA’s.  And that’s only swimming four relays, and without Franklin or Li really getting a shot at a full-on short course taper.  No, seriously… look:

Cal is returning three different NCAA individual champions: Rachel Bootsma, Cindy Tran, and Elizabeth Pelton.  The dynamic duo of Bootsma and Pelton were the top performers for the Bears last March (as true freshmen), scoring a combined 104 individual points, and also taking part in four relays each.  With incredible underwater work, both are superb backstrokers and freestylers, with Bootsma also tripling as an All-American butterflyer.  Thanks to an elite freshmen class and a great supporting cast, they should have easier programs at NCAA’s; neither of them should have to take part in more than one preliminary relay (most likely the 200 free relay) this year.

Although her 2013 performance left a lot to be desired, Cindy Tran will be looking to reclaim the 100 back title from her teammate in her final short course season.  She’s the 2011 and 2012 NCAA champion in the 100 backstroke, and actually also holds the fastest returning time in the 100 butterfly.  Her underwaters are some of the best in the world, and her on-top-of-the-water ability has improved each year.  To come away with the win this March, Cal needs Tran to return to 2012 form.  Her versatility in the medley relays gives McKeever a lot of additional flexibility when putting together lineups.  Speaking of relays…

Too Many Relay Options?

Is that possible?  Despite being pretty locked in with their breaststroke slots (Marina Garcia is unquestionably their best option at this point, although Celina Li looks like she could do a decent job filling in), coach Teri McKeever will essentially be able to use an entirely different squad on a preliminary relay, and still be able to easily secure a spot in the A-final.  Their depth across the board is unmatched:

While Bootsma, Franklin, and Pelton will surely be on their fair share of relays, what McKeever chooses to do with the remaining relay spots will largely depend on the championship performances of true freshman Kristen Vredeveld and senior Cindy Tran, two swimmers who were well off their best times a year ago.  The crazy thing to think about: with the depth at McKeever’s disposal, it’s entirely possible that Vredeveld and/or Tran won’t swim a single relay in finals.

At this point, Cal should be considered the favorite in every relay except for the 200 freestyle, partially because that’s the one Missy Franklin likely won’t be on (expect to see her swimming the 500 freestyle on day one).  The concept of evaluating teams’ prospects on paper is never certain, but Cal has the top-end horses (Bears?) and surrounding depth to take home at least four relay titles.

Names Not to Be Forgotten

Georgia is pretty loaded again, but this season has “Cal” written all over it.  While Caitlin Leverenz was critical for the Bears’ success over the previous four years, the points scored by Garcia, Li, Vredeveld, and Osman should definitely top what she brought to the table.  Add in Missy Franklin to that group, and you have a team with very, very few weakness (1650 and breaststroke depth are their noticeable flaws).  The only potential downfall (apart from mass sickness or injuries) would be if there are too many fast swimmers on the roster, and not everyone buys into the “team first” environment.  McKeever has never seemed to have had a problem fostering a “team first” environment, and this isn’t the first time she’s had a ton of swimming talent at her disposal.  With maybe their deepest team ever, look for Cal to run the table this year.

I’m very excited to watch this team throughout the season. go bears!

You are not the only one!
I’d like to be a little mouse to see the backstroke trainings in Berkeley. It must be quite a show to watch.

Great article, really in depth and accurate. No doubt Cal will run away with the title this year

Sorry this article smacks of a certain unfair bias towards those media darlings CAL Bears to me, so I’m forced to vent my extreme displeasure here.

Let’s get real. Lady DAWGs are rolling along with 85+ home wins – while Lady BEARs, let’s see, LOST to a bunch of no name teams in their most recent outing last weekend.

And hello, UBerkeley was picked as hot favorites by guys here last year but look what actually happened…

That’s why they race the races, and not make absurd foregone conclusions this early in the season like, “this season has “Cal” written all over it”…or “look for Cal to run the table this year”

If you want to see Georgia’s streak change, just ask Baurle to invite Cal over for a dual meet 😉

I was sure you would react very quickly! 🙂

… you do know I went to Stanford, right? And that I really like Georgia’s program?

UGA will be tough, no doubt, especially with Smoliga coming in… but they have to replace two NCAA/American record holders who accounted for most of their best relay swims (let’s be honest, Romano is the king of all relay kings). Cal “only” lost Leverenz, added Li and Garcia (who, together, should outscore/perform Leverenz), and ALSO added Batchelor, Franklin, and Vredeveld.

… and Cal didn’t even swim THAT well last year. Pelton and a few others were great, but that meet is a lot closer if Leverenz, Tran, etc. are close to their best.

Where is Swim Swam’s editorial integrity? How dare they ignore the long established/well-known Stanford bias in favor of all things Berkeley and allow a Stanford swim alum to write a fawning love letter to Cal swimming. For shame, Morgan. Turn in your pre-IPO railroad shares, Robber Baron.

Your bias is so strong that it has blinded you to the thorough data and facts presented within the article to back up its “absurd” conclusions.

Oh, and, dual meet streaks and winning an NCAA championship are not correlated.

While I don’t have a dawg (or bear) in the fight, I think it’s completely unfair to characterize CAL’s loss last weekend as a typical dual meet loss. They sent their B team (or more like C team) of only 10 swimmers to an early season invitational. I think it was a great idea to give other girls on the team, who likely won’t get to swim much this year due to the stellar recruiting class CAL brought in, a chance to compete. Considering that a “loss to a bunch of no name teams,” is just misleading.

FYI the Cal women’s teams are not the “lady” Bears….like the men, they are the Golden Bears.