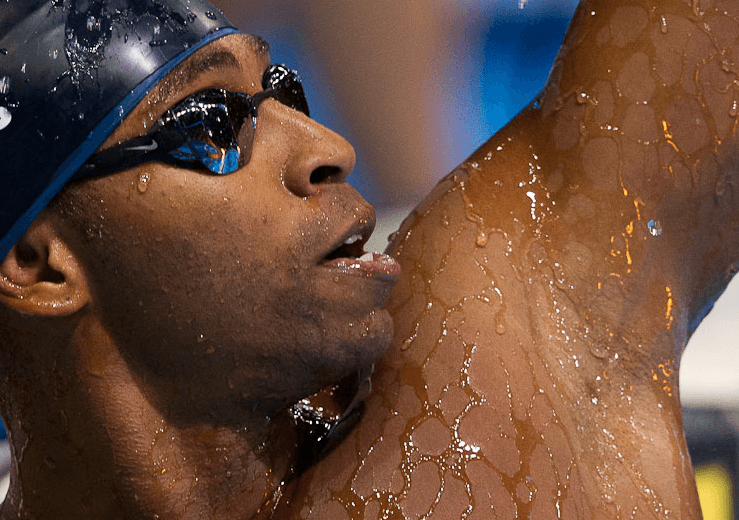 Cullen Jones and the American men will look to capitalize on a thin European sprinting squad.

The 2013 Duel in the Pool will kick off this weekend in Glasgow, Scotland, where the visiting U.S. All-Stars will go head-to-head with the European All-Star team.  While the Americans have dominated this meet in recent years, it looked like things would be a little more interesting with a lighter than ever U.S. team.  However, with four of their top swimmers all recently electing to bypass the meet, the tide has turned once again.

The four swimmers who scratched?  All French sprinters that would have been incredibly useful in multiple events and been critical relay legs, as well: Florent Manaudou (shoulder injury), Fred Bousquet (too old), Fabien Gilot, and Jeremy Stravius.

Scoring reminder: Each team can enter up to four swimmers per event, but only the top three overall score points for their team. We’ve been breaking down the match-ups over the last couple of weeks, and today we continue with the men’s sprint freestyle events, the 50 and 100 frees.

Had the four Frenchmen mentioned above not scratched, this preview would have looked a lot different.  The European team would have boasted the defending Olympic champion (Manaudou), the former world record holder in this course (Bousquet), and the final two legs of France’s World Championship-winning 400 freestyle relay (Gilot and Stravius).

However, Team Europe is still bringing some big name sprinters to meet with the recent additions of Britain’s Adam Brown and Ben Proud.  Brown is the National Record holder in the 50 free, and has been ranked amongst the world’s top 20 in two of the last three seasons.  In addition, he has plenty of short course experience in his career from his impressive collegiate years at Auburn.  Proud had a breakout season in 2013, becoming the fastest 18-and-under 50 freestyler ever with his 22.01 at the British Gas Championships back in June.

Although he’s not typically known for his pure sprinting abilities, with the six-event limit throughout the course of the event, don’t be surprised if Yannick Agnel is entered in both sprint freestyle events for the Europeans.  The 200m World Champion will almost certainly be entered in the 100, where he has been 46.6 short course meters and 47.8 long course.  There isn’t a great scope on what Agnel is truly capable in a 50 (he rarely swims it other than meets which he is training straight through), but we have seen him take out his 100 in 22.7 to his feet, and he just recorded a 20.0 last weekend at the NBAC Christmas Invitational.

Top to bottom, the Americans are loaded at this meet in the sprint events.Agnel will be in a big battle in the 100 with a quartet of Americans, led by training partner Conor Dwyer and World Championship silver medalist Jimmy Feigen.  Dwyer has been on fire since he began training with Bob Bowman last spring, including some impressive Arena Grand Prix performances this fall.  Feigen has stayed a bit under the radar since coming away with a pair of medals last summer, taking part in his first real meet of the season just last month at the Texas Invite.  Despite being slightly removed from the competition scene, Feigen, a 17-time All-American, is always dangerous in the short course tank.

The two American names we haven’t mentioned yet (Anthony Ervin and Cullen Jones) could easily take the top two spots in the 50.  The favorite should be Ervin, the world’s third-ranked long course sprinter in 2013.  He’s never been quite as good in the short course pool as he is in long course, but Ervin still sits as the eighth fastest man in the world in 2013, just behind his fifth place ranking from 2012.  Having competed in the FINA World Cup series all fall, Ervin has the distinct advantage over his fellow teammates of getting a lot of quality short course meters racing.  After have an admittedly-unfocused 2012-2013 season, Jones has been back at it, including some strong splits (18.4 and 42.0) a couple weeks ago at Winter Nationals.

Anthony will come as favorite for the 50 free and maybe also big contender for 100 free .

The men’s sprints should be interesting and hopefully very fast