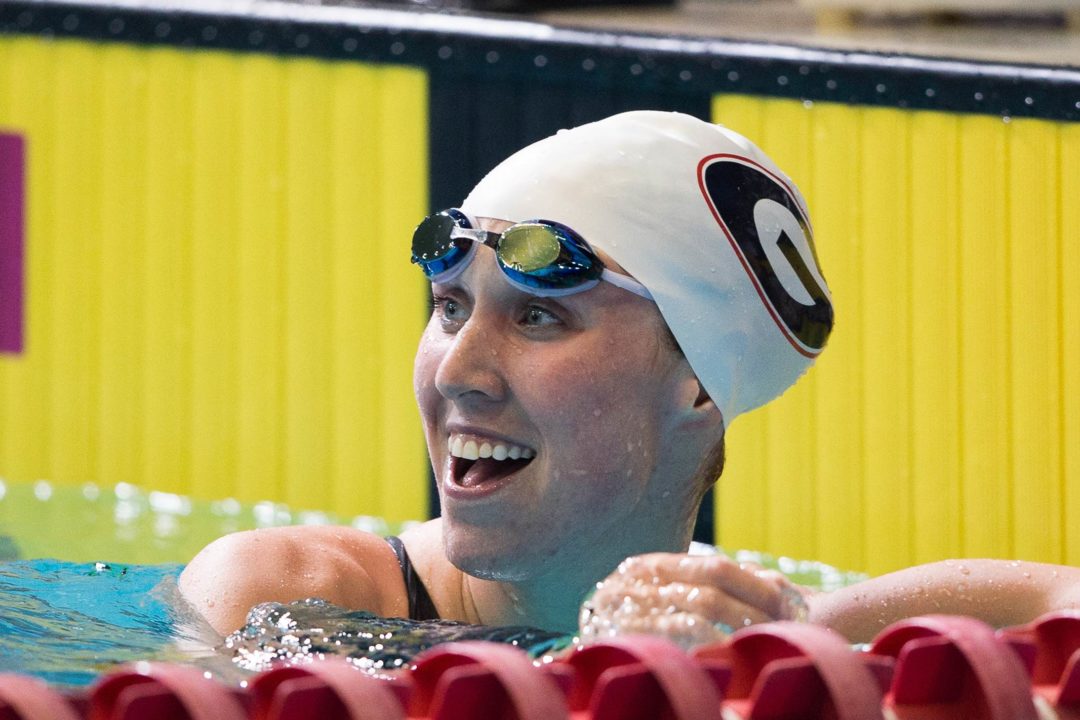 Led by seniors Allison Schmitt and Megan Romano, the 2012-2013 season had a storybook ending for the Lady Bulldogs.  After slipping up against the Tennessee women in late January, Georgia left no doubt as to who the best team in the country was a year ago, running away with the SEC and NCAA team titles.

Georgia’s top dogs (no pun intended) weren’t all at their 100% best, but when your team is as deep as the Bulldogs were last year, that’s not the end of the world.  It helps when some of those swimmers are amongst the best in the world at their respective events.  Despite being a little off, Schmitt and Romano each registered three A-Final appearances, and swam crucial legs on their NCAA-winning (and record-setting) 400 and 800 freestyle relays.

Allison Schmitt and Megan Romano.  How do you replace one of the top preforming combos in recent NCAA history?  From a time perspective, they both had down years in 2013, but they still accounted for 97 individual points, multiple NCAA titles, and seven of the most valuable relay swims in the country.

Romano is known around the world as one of the best relay swimmers on the planet, and was the fastest leg on all three Bulldog freestyle relays last season.  If we had a swimming sabermetric to equivalent to baseball’s WAR (Wins Above Replacement), Romano likely would have been the front runner in that category.  Even though Georgia was loaded with freestylers last season, she stood head and shoulders above her teammates in terms of overall speed.  Individually, she’s the NCAA, American, and U.S. Open record holder in the 200 yard freestyle (a mind-blowing 1:41.21).

Schmitt, meanwhile, is merely a six-time Olympic medalist, NCAA record holder, and multi-time NCAA champion.  2013 was a down year, and she still racked up 47 individual points, including a title in the 200 yard freestyle.

Not to be discounted, but senior Kelsey Gaid also scored for three individual points and swam on a final relay for the Bulldogs.  On just about any other team, Gaid, who was an excellent freestyler (1:45 in the 200) and backstroker (24-mid in the 50 up to 1:54.0 in the 200), would have been three or four relays.
…Yet despite losing two of the five most successful swimmers in the collegiate sphere, Georgia is still loaded, and if it wasn’t for Cal’s top-notch freshman class, they would probably be the favorites for another title.  Check out this chart of last year’s top 10 finishers, and their returning point totals:
All in all, Georgia is returning eight athletes who made individual A-finals last spring, headlined by an incredibly deep freestyle group:

Georgia is returning five individual scorers (Shannon Vreeland, Jordan Mattern, Chantal Van Landeghem, Amber McDermott, and Brittany MacLean) responsible for 132 points from the individual freestyle events last spring.  Without swimming a single relay, that group would have placed 11th as a team.
Vreeland is the biggest name amongst that group.  Vreeland returns to Georgia for her senior year as one of the most decorated athletes in college swimming.  She’s already a World Championship gold medalist, an Olympic gold medalist, an NCAA record holder, an American record holder, and an Olympic record holder, but she has yet to win an individual NCAA title.  With two of her biggest competitors (Schmitt and Romano) gone, expect to see Vreeland move up a couple spots in each event.
Mattern scored in two individual events for the Bulldogs in 2013, and also took part in their NCAA/American/U.S. Open record-setting 800 free relay from the SEC Championships.  Though she was bumped from that relay at NCAA’s (MacLean touched her out in the individual event to earn the spot), expect to see her as a regular this season. Mattern qualified for the 2013 USA Swimming World Championship team. This is what the Georgia freestyle group is – as one Olympic freestyler (Schmitt) and one World Championship team member (Romano) graduate, another one steps up to take their place.
Despite being overshadowed stateside by the likes of Elizabeth Pelton, Rachel Bootsma, and others throughout the recruiting process a couple of years ago Van Landeghem came into her freshman season as one of the top sprint recruits in the country, and was viewed as an immediate contributor.  The Winnipeg native didn’t disappoint, scoring 20 individual points and swimming on three Bulldog finals relays.  She’s coming off an incredible summer, having placed ninth in the 50 free at 2013 Worlds in Barcelona.
McDermott was a three-event scorer last spring, totaling 38 individual points, including a second place finish in the 500 freestyle.  With the graduation of champion Haley Anderson, McDermott will be the fastest returner in the event, but she will have to deal with the likes of Sarah Henry from Texas A&M (whose lifetime best of 4:33.07 is over 1.5 seconds faster than McDermott) and incumbent Missy Franklin.  She will almost certainly contend for the 1650 title, as well; she finished fourth a year ago, and was in second place (behind only Anderson) through 1100 mark before fading to fourth.

MacLean, yet another mid-distance star, rounds off this returning freestyle group with impressive credentials, as well, having scored 23 individual points and swimming the third leg on Georgia’s victorious 800 free relay.

Stroke specialists Melanie Margalis and Lauren Harrington were both A-finalists in 2013.  Margalis was an All-American in both IM events, and has also played the role of sprint breaststroker for the past couple of seasons.  Harrington is the #1 flyer for Georgia, and was a runner up in the 200 fly a year ago.  Like a lot of Georgia swimmers, the longer the event, the stronger Margalis and Harrington get.  Both will likely be on the medleys again, unless Annie Zhu or freshman Emily Cameron find another sprint gear to grab one of the sprint breaststroke spots.
Zhu joined Margalis as a three-event scorer in the 200 IM, 400 IM, and 200 breaststroke as a true freshman last year, accounting for 26 individual points, including a fourth place finisher in the 200 breast.
Margalis has always been a very good swimmer for Georgia, and without discounting what she did at NCAA’s last season (which was impressive), this year she looks like she’s going to become one of the faces of this Georgia team. She’s freestyling better than she has since her freshman year. She currently sits 5th in the 200 free nationally (she’s been ranked in the top two at different points of the year), 10th in the 500 free, 7th in the 200 free, 9th in the 200 breast, and 2nd in the 200 IM. If the Bulldogs want to repeat, she’ll be a huge key.
Georgia will also have the luxury of getting some big diving points from senior Laura Ryan, who scored 18 points over the 3m springboard and 10m platform events for the Bulldogs last season.

The Bulldog freshman class begins with Olivia Smoliga, arguably the best sprint recruit in this class (save for Missy Franklin, of course).  Smoliga is a world class sprint freestyler and backstroker, and will immediately be placed on four Georgia relays.  In a record breaking performance at the Illinois High School state meet last winter, Smoliga became the first high school swimmer to clear 22 seconds in the 50 yard free (21.99), and also lowered the high school record in the 100 back (51.43).  Considering she has also been 47.89 in the 100 free and 1:56.8 in the 200 back, somehow, Smoliga looks like she could be an overall upgrade from Megan Romano.

The rest of this class pales in comparison to Smoliga, but that’s largely because she’s just that good.  A bunch of the other names in this class are amongst the fastest prospects in the country.  Although she wasn’t on top of her game last year, Emily Cameron is the top breaststroker in this class, bringing in times of 1:00.5 and 2:13.6.  Cameron is a great freestyler, too, touting 22.7/49.4/1:49.0 in the 50/100/200 races.

Bringing added depth to the backstroke and freestyle groups is Tennessee high school state champion Kimberlee John-Williams.  A native of Trinidad & Tobago, John-Williams is characterized as a swimmer with a lot of potential and upside, but she’s already been 54.0 in the 100 yard back, along with 22.8 and 50.8 splits in the 50 and 100 yard freestyles on relays.

The last big name here is Rachel Zilinskas from the legendary Germantown Academy.  She’s primarily known as a mid-distance freestyler; she’s been 1:47.1 in the 200, 4:40.0 in the 500, and 15:59 in the 1650.  Those 500 and 1650 times would have scored a year ago, and with a year training with the likes of Vreeland, Mattern, McDermott, and MacLean, she could be a threat to finish rack up at least 15 individual points.

In just about any other season, this Georgia team would look to be in great position for a team title.  We covered the Cal women last week, so there’s no sense in repeating anything from that article other than to say that, at this point, Cal is the favorites.  Despite how much Smoliga adds to the equation and Georgia’s remaining freestyle depth, the loss of Schmitt and Romano, combined with Cal’s freshman class, will likely be too much for Georgia to take the title.

But, Margalis is already showing up big, Smoliga is swimming as expected, and Mattern’s improvements over the summer can’t be undervalued.

But… there are reasons we don’t give out titles based on who looks the best on paper.  We’ll see what happens in March.

When you look at Cals roster its hard to imagine a team that could beat them, but Georgia could do that. The freestyle group is still incredible. A lot of the names on Georgia aren’t as well known as the girls on Cal but ca contribute just as much. I think Van Landeghem will be huge this year on relays and rack up individual points. Her and Vreeland could lead this team to victory with girls like Mattern, Zhu, and Smoliga also scoring big points if they are swimming well.

agree with all above. also think that the way margalis has started the season, she will be in the running for several titles and will be key on all relays.