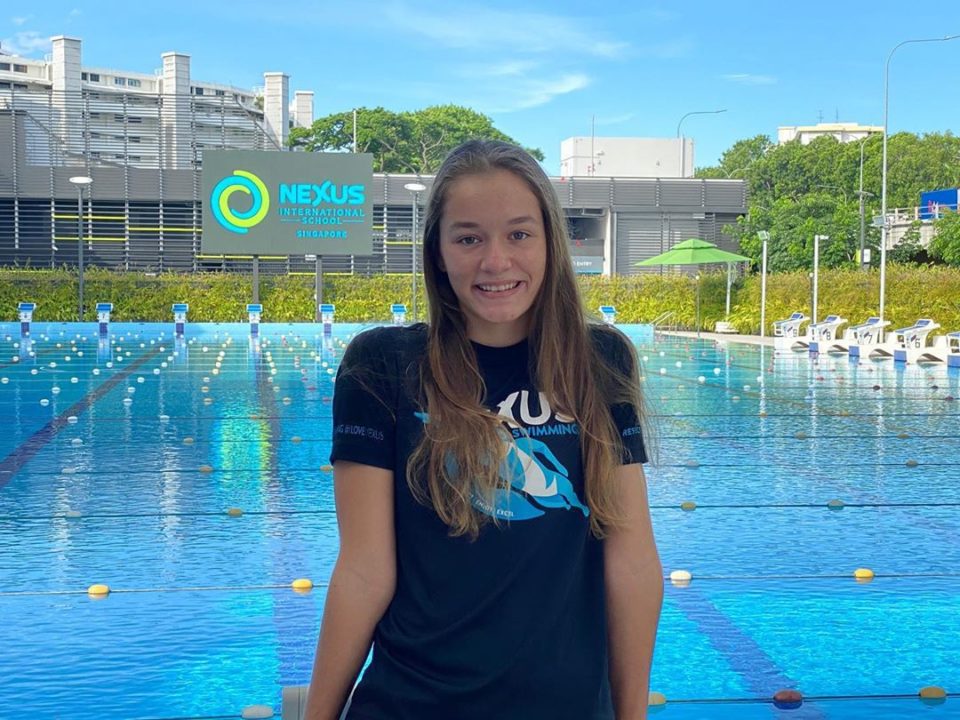 16-year old Spaniard Carmen Weiler, who lives and trains in Singapore, is inching closer to the FINA "A" cut in the 100 free. Archive photo via Carmen Weiler

The meet was Singapore’s first official competition since the coronavirus pandemic set in early this year, with 4 domestic swimmers clearing the Olympic Games “B” qualifying marks.

For the 16-year old swimmer who is verbally committed to race at Virginia Tech in the United States in the fall of 2022, that makes her Spain’s 2nd-fastest 100 freestyler in long course since the 2016 Olympic Games. While she’s short of the Olympic “A” cut of 54.38, that swim puts her on an inside track for a spot in Tokyo, if Spain chooses to pursue a 400 free relay.

Munoz’s time of 54.33 is under the FINA “A” time of 54.38, which Weiler would need to also go under in order for both swimmers to enter the event individually in Tokyo.

Singapore, which currently holds a wildcart slot in the 400 free relay, saw their top sprinter Ting Wen Quah finish 2nd in that race in 56.42. Quah raced at the meet shortly after emerging from a mandatory two-week quarantine after returning to the country from ISL competition in Budapest.

“I’m quite pleased with how I did today, it’s all about getting the feel of the water again,” said Quah.

“Right now it is more about the fitness and the water feel because I have been out of the water, so hopefully by Sunday when the 50m Freestyle comes around I will be a bit more comfortable,” said the national record holder of the 50m, 100m and 200m Freestyle events.

Quah was one of 4 Singapore swimmers to mark FINA Olympic “A” qualifying times at the meet:

Jospeph Schooling and Quah Zheng Wen, neither of whom raced at the meet, have both already qualified with “A” cuts in the 100 fly.

Looking back at the meet, National Head Coach and Performance Director, Stephan Widmer, said, “As we all know during the circuit breaker, all the athletes were out of the water for a period of time, then they were slowly allowed back into training with a lot of restrictions and this was the first racing opportunity for them since January. We could see that for some they were quite rusty, plus this was not a normal competition, first time racing again but under totally different rules, but overall I think everyone did a great job at coming back.”

“I think we made the most out of it, both coaches and swimmers, these are good experiences and the opportunity to race is always a good one for anybody. With most of the coaches coming into this meet with a drop taper, looking at the results, I am relatively pleased with some, but we got a lot of work to do. The realism is that we got a lot of information out of this meet that we can use to further fine tune the swimmers for March”, added National Training Centre Head Coach, Gary Tan.

On the 6 “B” cuts met by the swimmers at this meet, Tan said, “We came into this meet with certain expectations, of course, the best scenario was to have 1 or 2 swimmers meet the “A” cut, but this is just the second meet in almost eleven months for us, and the results show that there are a some cobwebs that we need to dust off our backs, definitely a lot of room for improvement and where we are lacking in right now, this is an opportunity for us to make some changes. I would not say that we are satisfied but it makes us hungrier and wanting bigger and better things come March and hopefully we do not have to wait till July to have more swimmers qualifying for the Olympics.”

she is my cousin

lol i am proud of her