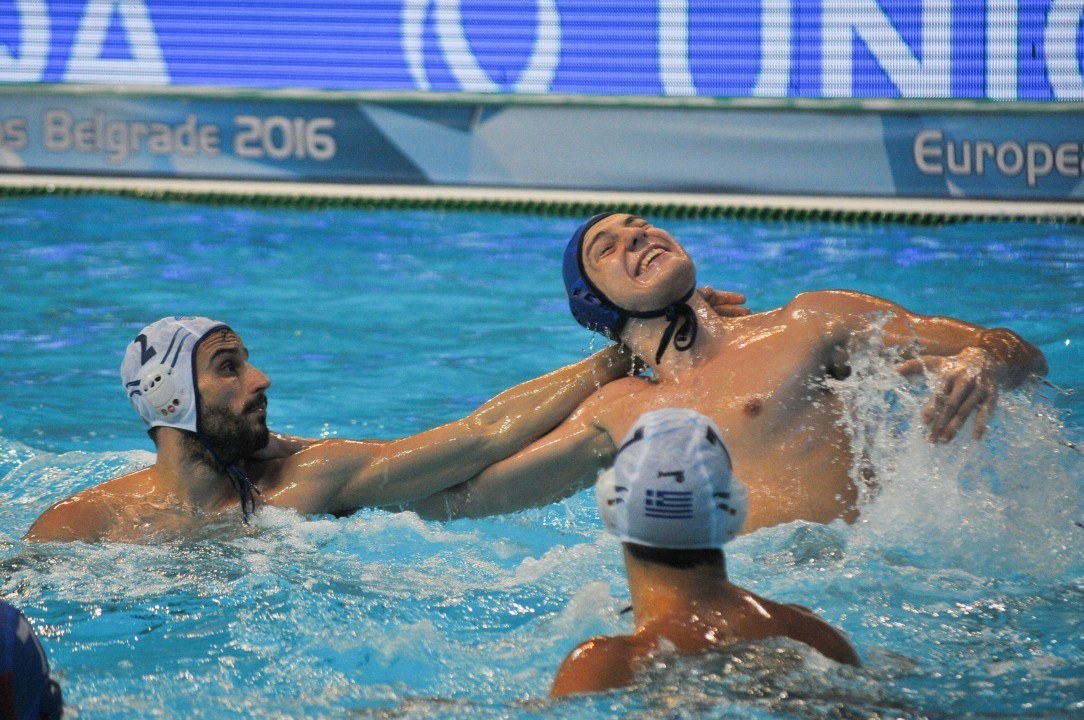 Serbia scored 7 goals on 9 shots in man-up situations, whereas Greece was held scoreless in just three shots with the same advantage. Current photo via Dusan Zivkovic/Belgrade 2016

The powerhouse Serbian men’s water polo team has advanced to the championship match of the 2016 European Water Polo Championships via a 13-7 thumping of the Greeks in front of a home crowd in Belgrade on Wednesday. This leaves the hosts one match away from becoming the first team since the 1983-1987 Soviets to three-peat as the continent’s champions.

This is the second-straight event in which they’ve topped the Greeks with some routine in the knockout stages.

Serbia, besides being the two-time defending champions of Europe, are also the defending World Champions, and will face Montenegro for the second championship match in three tries. This is an old rivalry of former Yugoslavian countrymates who co-existed from 2003 to 2006 and won one unified European water polo crown.

The Greeks did have some defensive success early in the match, which has been a hallmark of their tournament, and trailed just 3-4 after one quarter of play. But the Serbians’ depth frequently shines in the 2nd and 3rd quarters, as it did on Wednesday where they outscored Greece 6-1 across the 16 minutes of play.

Two early exclusion fouls from 2-meter player Kyriakos Pontikeas left Greece thin at the position, and he’d wind up drawing a 3rd in the 3rd quarter after just 3:34 seconds of field time.

That left a lot of pressure on one of Greece’s top players, Angelos Vlachopoulos, who scored two goals but was forced into over 30 minutes of time in the field.

Meanwhile, the Serbians maintained a strong rotation and were able to keep their players fresh. throughout the match. They were paced by three goals each from wing Filip Filipovic and a perfect 3-for-3 from center-forward Dusko Pijetlovic, including the match’s only goal out of center.

The difference in the match was highlighted on man-up success. Greece actually drew more exclusion fouls than Serbia (13-12), but Serbia scored 7 goals on 9 attempts in those man-up situations. Serbia was only able to get off 3 shots against a very technical Serbian penalty-kill, and scored no goals.

Wow, Serbia – Montenegro finals. I can’t even tell you how excited people in Montenegro are about this game. Montenegro is a country of 600,000 people that plays second best waterpolo in the world. By the way, for those not familiar, Montenegrins are also Serbs, just different country, split by stupid and corrupt politicians.

“..plays second best waterpolo in the world” – How do you figure? Just asking…

Nobody cares about WP, except Serbia and Montenegro. It’s an overrated sport in these two countries, and it’s taken seriously only by the countries in this region. Average national swimmer is a better athlete then the top WP player, but it’s 1000x times easier to be successful in WP then in swimming. Had to be said. And yes, I am a bitter ex swimmer.

You know nothing about this sport and I would guess you never played it competitively. An average or even top national swimmer will only be able to swim quicker and that about it. Physically the swimmer will get beaten to a pulp if not drowned. Can he catch and throw a ball with precision at 40 to 60 mph? I highly doubt it. Ask any athlete who has played water polo and other sports and they will tell you that water polo is the toughest. Just look up worlds toughest sports and youll see that WP ranks high and in many cases is ranked #1