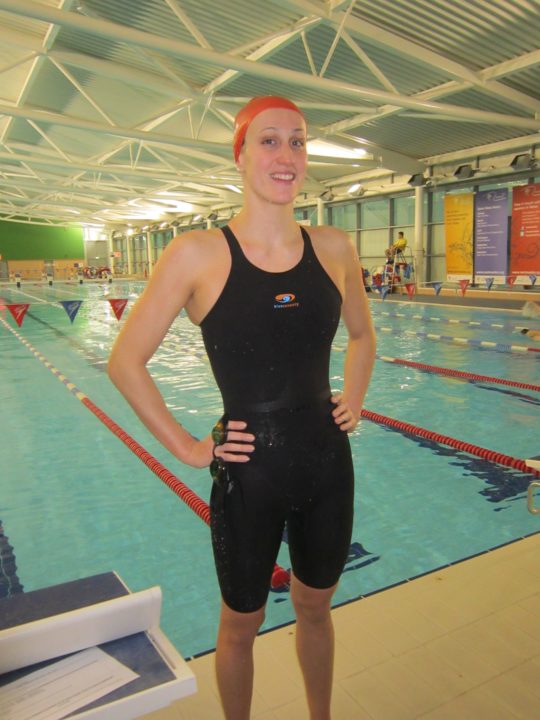 Bath’s Jay Lelliott fired off the first win of the night in the form of the men’s 1500m freestyle. Lelliott doubled up on his 400m freestyle victory from earlier in the meet with an impressive outing in this grueling event, clocking a monster time of 14:36.49 for his efforts.  Although Lelliott broke the English record which had stood for 20 years in the event, Lelliott still wasn’t 100% pleased with his swim.

After the race the Bath swimmer stated, “I sort of had my eye on the British record if I’m honest. My nerves got the best of me a little. I went out ridiculously fast and at about the 1100m mark I could really feel the lead in my legs. I just need to keep up my 1500m training which remains a focus for me in 2016 and I am really pleased with how much excitement there was around this race and the growing support and attention to it.” The British Record still stands at 14:32.56.

London Aquatic Center’s Aimee Willmott came on strong again on night 3, collecting more hardware as a result.  In earning her 4th medal of the meet, Willmott took the women’s 400m freestyle tonight, clocking a mark of 4:02.34.  That time is the 2nd-fastest of her career, with only her 4:01.89 from 2012 having been faster.  Of her performance, Willmott stated via social media, “Really chuffed with my 400 final tonight to take home the gold! Just outside my PB again but can’t complain.”

Molly Renshaw, who demolished the British short course record in the women’s 200m breaststroke during last night’s finals, raced her way to a win tonight in the 100m distance. The Loughborough swimmer threw down a time of 1:05.22 to shave .17 of a second off of the previous record held by Sophie Allen at 1:05.39.  Said Renshaw of the gold medal-winning swim, “I am actually really surprised after that swim. I wanted to go under 65 so I’m really pleased that I was able to that.”

One more record was cranked out on the night, as Georgia Davies registered a time of 26.24 to win the women’s 50m backstroke.  The time wiped away her own previous British National Record of 26.35 she has held since 2014.