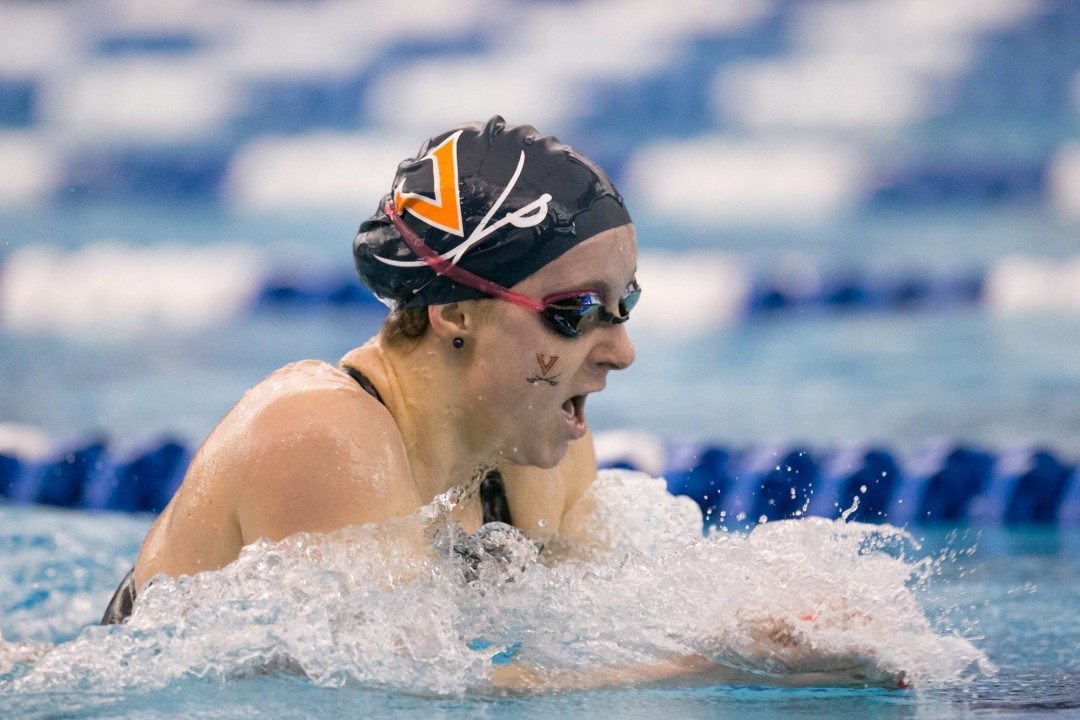 Kaitlyn Jones of Virginia took the top seed in 4:07.85 ahead of Georgia’s Emily Cameron and Megan Kingsley. Cameron’s 4:09.86 also cracked the 4:10 barrier. Georgia’s Annie Zhu will be in the mix as well after qualifying sixth.

Auburn also scored three A finalists, with Annie Lazor in fifth, Zoe Thatcher in seventh, and Ashley Neidigh in eighth. Monika Gonzalez Hermosillo will be Penn State’s lone A finalist after qualifying fourth. Neidigh qualified eighth with a 4:14.40.

Cal’s Josh Prenot and Ken Takahashi will also be in the mix tonight after clocking times that rank them fourth and sixth. Georgia’s Gunnar Bentz and Kevin Litherland sit fifth and seventh, and the field is rounded out by Auburn’s Samuel Stewart in 3:50.64.

In back-to-back swims, Virginia’s Kaitlyn Jones came away victorious twice, as she also leads the 100 fly field after this morning. Jones’s swim adds to her incredible meet, dropping over a second off her lifetime best to clock in at 51.72 over her teammate Ellen Thomas (52.35). Georgia’s Hali Flickinger and Kylie Stewart follow the Cavalier pair in 52.38 and 52.53.

Virginia claimed the next three spots with Jen Marrkand, Shannon Rauth, and Megan Moroney. Ensuring that the A final belonged to the Cavs and Bulldogs, Megan Kingsley qualified eighth for Georgia in 53.37.

Justin Lynch of Cal secured himself a lifetime best to go along with the fourth fastest time in the country. His swim from this morning would also have qualified him for the A final at last year’s NCAA’s, well ahead of his 18th place performance. Lynch’s time of 45.78 topped Georgia’s Pace Clark (46.53) and Auburn’s Arthur Mendes (46.68).

Leah Smith and Megan Moroney led the pack for Virginia in the 200 free, both qualifying under 1:45 to take the top two spots. Smith’s 1:44.20 and Moroney’s 1:44.88 lead a strong field also featuring third and fourth place qualifiers Meaghan Raab and Brittany MacLean from Georgia. Smith and Moroney both posted season bests that now rank them second and sixth nationwide.

Kaitlin Jones (no, not the same one) from Penn State ranks fifth after this morning. The A final will be rounded out by two more Cavaliers in Hanne Borgersen and Eryn Eddy. Georgia’s Shauna Lee holds the 8th seed with a time of 1:46.69.

Laura Simon, the second fastest returning NCAA 100 breaststroker, picked up the top seed this morning. Simon’s 59.28, along with Annie Lazor‘s 59.76, were the only two swims under a minute. Virginia’s Vivian Tafuto qualified third, while Auburn earned a second A-finalist with fourth-ranked Natasha Lloyd.

Sami Pochowski of Florida State and Melissa Rodriguez of Penn State qualified fifth and sixth. The last two spots were claimed by Georgia with Emily Cameron and Annie Zhu. Zhu’s 1:01.20 closed off the A-final.

Yannick Kaeser of Virginia claimed the top spot over Florida State breaststroke ace Jason Coombs, topping him 52.48 to 53.06. Auburn’s Michael Duderstadt was in the mix, cruising in for the third seed in 53.19. Tailing him was Cal duo Connor Hoppe and Hunter Cobleigh, who qualified fourth and fifth. Auburn’s Jacob Molacek, Cal’s Matt Whittle, and Georgia’s James Guest (54.29) were next in qualifying succession.

Courtney Bartholomew of Virginia led the way comfortably this morning in the women’s 100 back, grabbing the top seed in 51.08. Between her prelims swim and her sub-51 relay split last night, Bartholomew now owns the two fastest times in the country this year. Following Bartholomew was the Georgia pair of Olivia Smoliga (52.40) and Kylie Stewart (52.54). Auburn’s Caroline Baddock and Jill Vitarius qualified fourth and fifth. The A final will be closed out by Florida State’s Bianza Spinazzola, Auburn’s Sarah Reynolds, and Virginia’s Caitlin Cooper (54.55).

Georgia’s Taylor Dale clipped Cal superstar Ryan Murphy for the top seed in the 100 back. The pair finished in 46.34 and 46.46, not too far ahead of third qualifier Jacob Pebley. Murphy split 44.78 to lead off last night’s medley relay so be on the lookout for him to impress tonight.