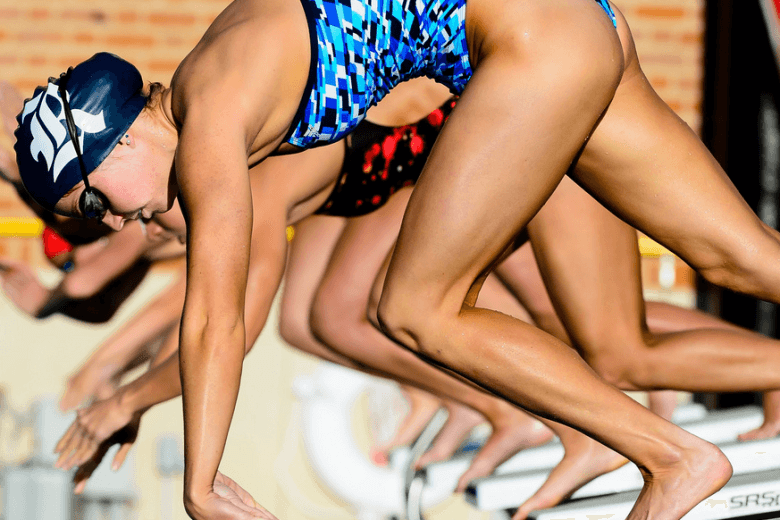 Rice swept all 3 teams on the women’s side while Grand Canyon topped Cal Baptist on the men’s side at a quad meet hosted by Grand Canyon on Saturday, January 6th. This is the first season Grand Canyon is hosting meets at the FR Edward J. Reese Aquatic Center in Phoenix, which is also home to the Brophy Catholic College Prep swim teams. In Grand Canyon’s 2nd meet at this pool, 11 pool records fell, 8 women’s and 3 men’s.

Grand Canyon swept the men’s and women’s relays, taking down the women’s 400 free relay pool record in the process. Their time of 3:28.29 was only half a second off their time from the Northwestern TYR Invite in November.

One of the fastest performances of the day came from Cal Baptist Sophomore Eric (Scott) Tolman, who crushed the field in the men’s 200 breast and went a 2:00.33.

Senior Kaitlyn Swinney claimed a pair of individual events, including the win in a clutch 1-2 finish in the 200-individual medley late in the competition, to help the Owl swimmers sweep three head-to-head duals at the Grand Canyon University Quad Meet Saturday afternoon in Phoenix, Ariz.

Rice head coach Seth Huston hinted that with multiple heats of the 14 swim events, plus alternating the meet a simultaneous men’s meet, Saturday ended up feeling more like a marathon. The Owls’ fortitude to win six of the events, however, was one of the keys to success.

“It was a long session, a three-hour meet today, and the team is definitely tired,” Huston said. “We gave up a lot of points because we were second to Grand Canyon in both relays, and we had to overcome some diving points (in which Rice does not compete), but individually we swam very well. We had really good swims and improved quite a bit compared to yesterday (where the Owls competed in a similar quad meet in Tucson against No. 12 ranked Arizona).

“Kaitlyn’s 200-IM, and the 1-2 finish by her and Jaecey at the end was big for us,” Huston explained. “I was very happy with Ellery and Lindsay in the 200-free. Alicia had another really nice 100-free today. I was really happy again with Kelsey Evans swimming a couple of events for us and doing a great job. I think one of the highlight swims today was Claire’s 1000, which was awesome. She was in the second (traditionally slower) heat and ended-up winning the event with a great effort.

“The entire weekend, winning five-of-six meets here in Arizona,” Huston added, “was good. It was a long week when you get to the end of it. We had good training and team-bonding, and we should be able to show some results from the work we did this week down the road.”

The women’s team comes in at No. 45 on CollegeSwimming.com in the Mid-Major Rankings, beating their previous best ranking of No. 47 in 2016-17.

CollegeSwimming.com rankings are based on dual-meet head to head competition, meaning, the teams with the stronger depth, get ranked higher. However, these rankings are not intended to reflect NCAA Championship team placing.

The SwimSwam NCAA Scoring Rankings are based on top performers as they would be scored at the NCAA Championships this upcoming Spring, which are based on mid-season times.

The Lopes next home meet will come on Jan. 6 versus Cal Baptist at the Fr Edward J. Reese Aquatic Center.

PHOENIX, Ariz. –New Mexico State’s Raina Brommer and Sheridan Decker shined bright in the diving categories on Saturday afternoon as the Aggies wrapped up their weekend on the road at Grand Canyon. The meet saw the team prevail over Cal Baptist (170-128), but fall short to Rice (207-87) and GCU (180-118).

“Despite the loss to GCU and Rice, we showed some character at the end of the meet,” head coach Rick Pratt said. “We had many do better than yesterday and our distance swimmers were solid today.  The way we finished says a lot about our training and we’re in a good place physically heading towards the rest of the season. Our divers were also great today. We have to keep getting faster and let our swimmers recover, but overall, this weekend was a good experience for our team.”

GCU’s Iryna Glavnyk, Marina McInelly, Diana Jaruseviciute and Samiha Mohsen took home first-place in the 200-yard medley relay with a time of 1:44.39. Alicia Caldwell, Marie-Claire Schillinger, Kiley Beall and Lauren Rhodes from Rice placed second with a time of 1:46.00. Representing the Aggies in sixth-place were Eliana Beaudry, Hanna McGowan, Reagan Nentwich and Johanna Pettersson with a time of 1:49.70

Marie-Claire Schillinger completed the 100-yard breaststroke for Rice in first-place with a time of 1:05.04. Alyssa Christianson (1:05.66) and Marina McInelly (1:05.79) placed second and third, respectively, for GCU. For NM State, Hanna McGowan finished fifth with a time of 1:06.15.

GCU’s Jaruseviciute finished the 50-yard freestyle in first-place with a time of 23.56. Lauren Rhodes (23.93) and Jaecey Parham (24.55) finished second and third, respectively, for Rice. Makena Sutherlandgave New Mexico State a fifth-place finish when she posted a time of 25.18.

New Mexico State’s Brommer captured first-place in the three-meter diving category when she tallied a score of 291.90, while teammate Decker placed second with a final score of 238.70. GCU’s Elmidany finished in third-place with a score of 209.20.

In the final event of the day, Grand Canyon’s team of Jaruseviciute, Ortiz, Mohsen and Roaia Mashaly finished first in the 400-yard freestyle relay with a time of 3:28.29, followed by Rice’s Parham, Rhodes, Caldwell and Lindsay Mathys with a time of 3:28.78. New Mexico State’s P. Bender, Laporte, Sina Wegeland Johanna Pettersson placed fifth in the event with a time of 3:38.32.

The Aggies return to the NM State Swimming and Diving Complex as they welcome CSU-Pueblo on Jan. 13. Competition will begin at 11:30 a.m. (MT).

PHOENIX – An early look at NCAA Division I competition worked out well for California Baptist University in a quad dual at Grand Canyon that featured the Lopes, New Mexico State and Rice on Saturday.

CBU battled tough but ultimately fell to all three teams: New Mexico State (170-128), Grand Canyon (178-110) and Rice (189-91), with the Lopes and Aggies being future Western Athletic Conference opponents next season.

Two of the Lancers newest additions won individual events, while there were several other impressive performances for CBU. Sofia Petrenko and Buse Topcu each won an event, with Petrenko victorious in the 200-yard butterfly in two minutes, 5.38 seconds and Topcu setting a Reese Aquatic Center record when she won the 500 freestyle in 4:55.91.

Savannah Uhlir ended her weekend with two top-five finishes on the boards, taking fourth at 3-meter and fifth on 1-meter with 201.50 and 197.05 points, respectively.

“We were short on the women’s side with some injuries, but Savannah stepped up to the challenge and dove really well beating out upcoming WAC opponents,” Dive Coach Jeff Coutosaid.