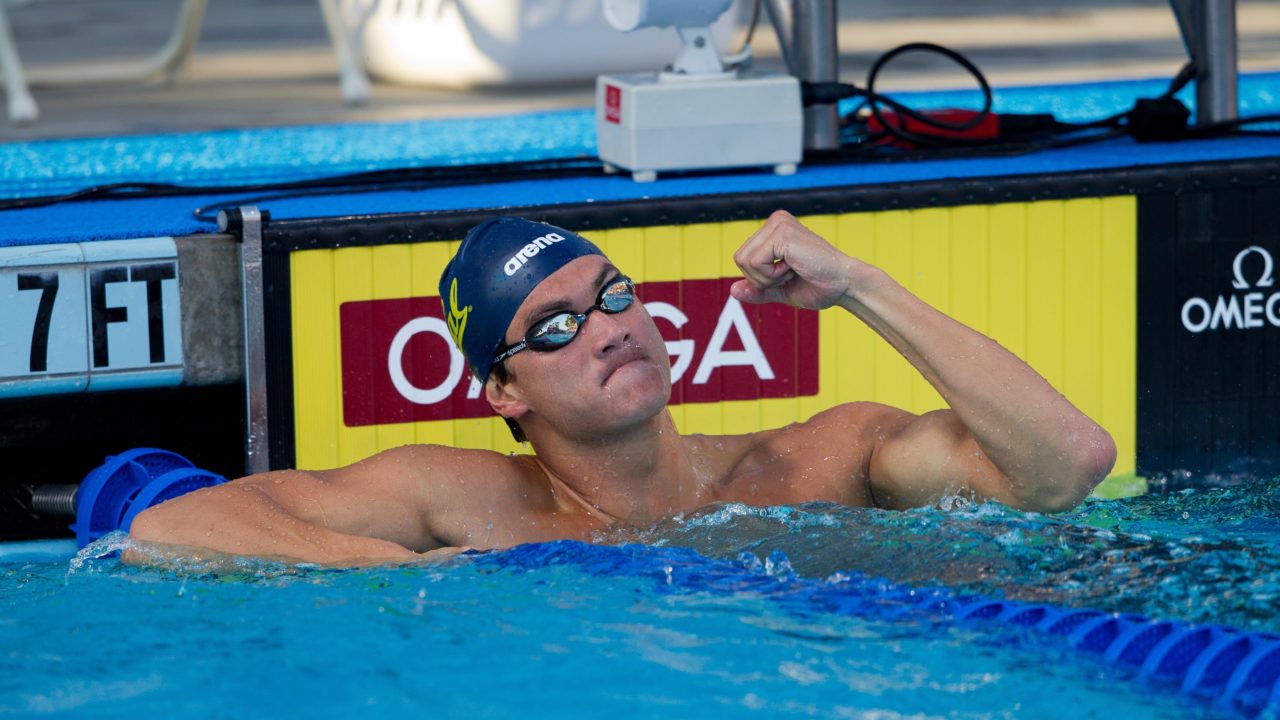 Nathan Adrian, the defending Olympic Champion, is a big favorite in the 100 free with many retirements from the male sprint group. (Photo: Tim Binning/TheSwimPictures.com)

The 100m freestyle has long been one of the marquee events at the Olympics and World Aquatic Championships since first recognized by FINA in 1905. Names such as Weismuller, Spitz, Biondi, Phelps, and now Adrian grace the pantheon of American sprint freestyle.

Six of the swimmers who raced for Olympic births in Omaha a year ago are back this year, including the top 5, with Beijing 4×100 free relay superhero Jason Lezak retired, and Scot Robison off the radar.

Can Jimmy Feigen translate 2012 NCAA sprint event titles into long course success? Will Cullen Jones, coming back after time off, get back to his 100m free form of 2009 when he went 48.3? Or will Matt Biondi and Tom Jaegar hijack lane 8 and do a 100m relay, shattering Cesar Cielo’s world record by four-and-one-half seconds?

Nathan Adrian, reigning Olympic champ, is coming off a solid performance at the Santa Clara Grand Prix, where he posted the 4th fastest time in the world this year at 48.08, which is faster than what he swam at trials in 2012.

That time also makes him the fastest American this year by almost a full second. Despite this, he was also the clear favorite in the 50 last year at Olympic Trials only to place third behind Cullen Jones and Anthony Ervin. Regardless, with the man-legend Lezak gone, London individual gold in hand, Adrian has ascended to be the next great name in the long line of great American 100m freestylers.

Internationally, James Magnussen is the man to beat. He has the fastest textile 100 all-time, and posted a 47.53 – fastest in the world by .4 seconds this year – back in April. It will be interesting to see if he and the Australian team have bounced back after the debacle that was the London Games.

The main challenge should come from Ricky Berens, Cullen Jones and Anthony Ervin. Berens and Ervin have both put out in-season 49’s this year. Ervin in particular has been looking sharp,recently laying down a 22.0 in the 50 with a performance that he called just “OK.” He also outraced Jones, Berens, and Garret Weber-Gale in the 100 at the Arena Grand Prix in Charlotte, taking it out in a blistering 22.9.

After taking some time off after London, while also traveling the country as an ambassador for the Make a Spash Tour, Cullen Jones cranked out a 22.16 for the 50 in Charlotte. Jones is a big-meet swimmer, saving his big swims for meets such as World Trials. Expect him to be much faster and challenge Adrian on the front half.

Longhorns Aquatics’ Jimmy Feigen is hoping to build on the silver he got for swimming in the 4 x 100m free relay in London, as well as on the 50-yard and 100-yard NCAA titles from 2012 and qualifying for an individual event. He will need to seriously flirt with his best of 48.4 to make the team outside of a relay. Fellow Longhorn and 200 specialist Ricky Berens swam a 49.55 on June 7th at the Texas Senior Circuit, and also broke the American 200 yard record in March swimming a 1:31.31 after a last minute shave down. With his mid-range speed he should be a factor closing.

Also not traditionally known for the shorter sprint events, Ryan Lochte put up a 49.53 in Santa Clara a few weeks ago. Given that he has been busy with his exploits into reality television, his recent results aren’t overly suggestive of where he will be performing by the time Trials come around. Keep in mind though that this race is early in the meet (the second event, after the 200 fly) and so Lochte with his famously challenging schedule will be well rested.

Another new addition this year will be Conor Dwyer, who put up a 49.59 at Santa Clara, the first time he’s ever gone below 50. More of a mid-distance freestyler, Dwyer turned heads with that swim, putting him into the conversation for a relay spot. With that kind of in-season speed he may prove to be the one to surprise the field in Indianapolis.

Fellow 2012 Trials finalist and yet another Longhorn, Garrett Weber-Gale has also had a very busy year. Despite having his hands full working as a food and health advocate, visiting the White House and running his health & fitness website, Weber-Gale has continued training since London. His focus is past World Trials, however, as he is just using the meet as a tune-up for the Maccabiah Games in Israel in July, so don’t expect best results from him. (Matt and Reed bring up the rebuttal, though, that he’s still swimming for a spot on the National Team and all of the benefits that come along with that.)

18 year old phenom Jack Conger, who took down a 30 year old high school record for the 500 free in February, is an outside bet to make the relay. He swam an unshaved 50.5 in Charlotte, and looks poised and hungry to make his first international team.

Matt Ellis isn’t in the psych sheet at all. I know he is transitioning back to Texas. But not even swimming?

Some of the ‘mature’ comments about Michael Andrew are very childish. None knows what future holds for this kid but he is one of the best swimmers at his age group.

Conger and Ellis don’t stand a chance against Michael Andrew. Andrew is a professional and they are merely amateur athletes. What were they thinking with this whole “college” thing?

Too bad that guys like Dave Walters don’t swim anymore the 100 free ; he was pretty good at it . Webber Gale is far form his fast swimming from 2008 or 2009 . Would love to see what Jack Conger or Jimmy Feigen can show us in 2 weeks . Adrian is the undoubted favorite . I see him under 48 according to what he showed in Santa Clara ( and 21.6 on 50 free ) . He is on a high high wave of super performances . Some youngsters could really surprise here and maybe make the Team for the 400 free . It will be fun and surprising for sure . Can’t wait .

Please, don’t talk about Dave Walters. It makes me sick to see he still has the American record.

Why? Because I’d prefer to see the best with a record. LIke Nathan Adrian in the 100 free with the American record rather than him. Like MP or Yannick Agnel in the 200 free with the WR rather than Paul Biedermann. Like Sun Yang in the 800 free with the WR rather than Zhang Lin. Dave Walters is a very good swimmer but excuse me, his 47.33 are ridiculous. What has he done before 2009 and after 2009? We can say the magical suit has been very beneficial for him! Without his magical suit he has disappeared from the top world ranks and was back to his previous level.
Best times.
2008. 49.04
2009. 47.33
2010.… Read more »

If only Biedermann had been slower by 0.01 in Rome, we would have still called it Thorpe’s.

I hope Yang will finally break the WR in Barcelona.

However, its a little embarrassing that Adrian couldn’t even get under 48 in the super suits.

What about Michael Andrew?

0
0
Reply
Believer
Reply to  The Beach

The great-tasting and nutritious power of P2Life is going to propel Michael to victory! He’ll win the 50 free, 100 free, 200 IM, and 400 free relay (by himself)…. at THIS world champ trials! Nathan Adrian, Ryan Lochte, and all other wanna-bes will float in awe as this 14-year old man-child finishes each race and is already beating the next level of Mario on his Game Boy as they finish. Hold on to your caps folks, we’re in for a real show.

Ok, joke’s been made, everyone’s had their fun. Please redirect your conversation to the topic at hand.

Dear moderator, I agree with you. Don’t forget we talk about a 14-year-old kid. Some comments are so stupid. I don’t know where Michael Andrew will be in the next years but the funny thing I know is that if he’s in an olympic final, most of the guys who criticize him today will be the first to cheer on him in front of their televisions.

Adrian should win pretty easily, this time around only. The mens100 free is not just one of the marquee events in the world, it is THE marquee, premier, golden event in swimming.

Additional competition is always coming up the pike. Alot of guys want to compete, and Adrian will only have a short breather before other talent rises to challenge hard.

Nathan Adrian of course with an easy win in Indianapolis. 48 low or 47 high will be enough for him so he can keep his best for Barcelona. Behind him anything is possible!!!! It’s too hard to find a name so I stop my predictions here. I don’t need a headache!
But it would be good to watch new names in this race, at least in final, like Matt Ellis (49.24 last year when he won the junior pan pacs), Jack Conger (49.84 last year) or Tyler Messerschmidt. And among the youngsters I will watch Caeleb Dressel, 16, who has swum 50.85 last year.

The only reason I was apprehensive about Matt Ellis was because he’s transitioning in his training. Was at Georgia, now working at Nitro, soon to be at Texas. Have doubts about how that will go this year, though long term he’s surely a pick.