10 Things We Noticed on Day 3 of the 2014 U.S. Junior National Championships 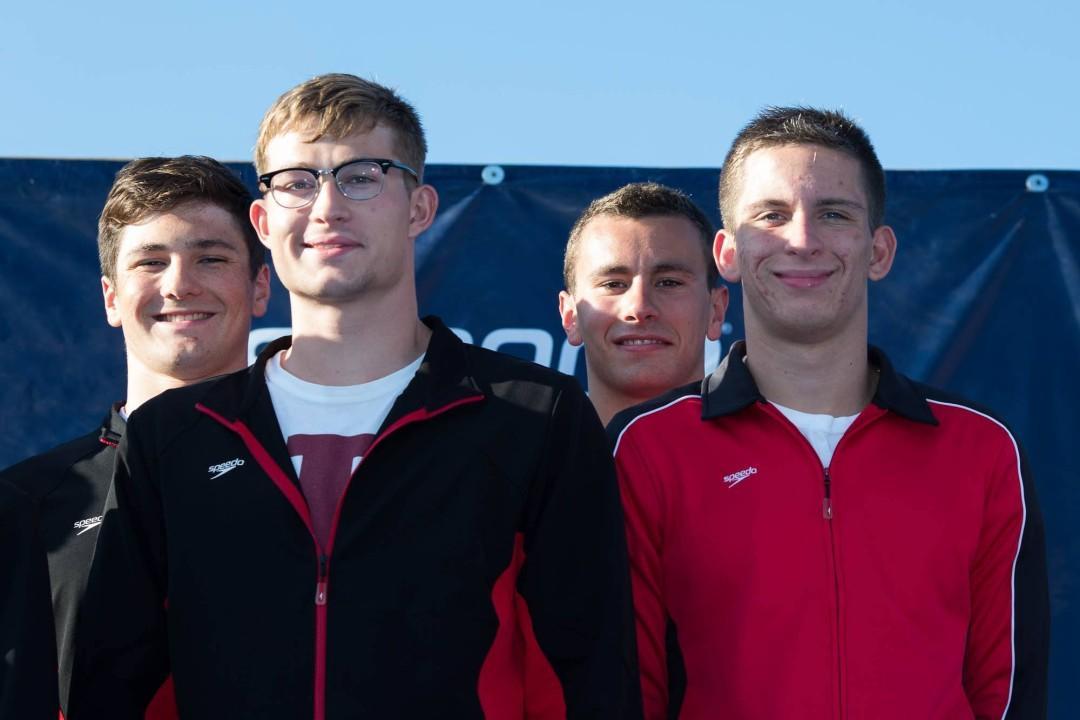 One of these things is not like the others...one member of the Indiana University Swim Team's National Age Group Record setting 800 free relay still has a year of high school left. Current photo via Tim Binning/TheSwimPictures.com

This is sort of an odd team in that they don’t come from the same parts of the state of Indiana. Max Irwin, the second leg, is entering his sophomore year at Indiana and is a Bloomington native. Brandon Colonis is preparing to start his first year for the Hoosiers and is from West Lafayette – home of the rival Purdue Boilermakers. (3) Blake Pieroni, the anchor, was fantastic on his second relay swim of this meet, splitting a 148.39 on the back end of this group. He hasn’t swum an individual race so far here in Irvine, and his target is really seniors next week (and he’s not too far off from contending for relay spots in the 200 free).

There’s one odd duck here though, and that’s the lead-off swimmer (4) Ian Finnerty. He split a 1:53.15 on a flat start, but he’s the only swimmer who is not yet officially associated with the University of Indiana.

That’s because he’s entering his senior year of high school. Finnerty, until this meet, had been swimming unattached, and through the short course season was representing the Counsilman Center Swim Team. That’s the name of the club team that practices out of the Indiana pool – but because of complex NCAA rules, the distinction between the club team that practices out of Indiana’s pool and the Indiana University Swim Team.

The rules and relationships are too complex and the details too potentially convoluted to decipher exactly what that means, but his decision to switch for this meet is certainly an interesting one, and could be an indicator that a very good recruit is intending to stick close to home for his college swimming.

(5) 17-year old Alex Valente didn’t quite get under 53 seconds in the final of the boys’ 100 fly, but he did swim a 53.09 – another .01 second drop from his swim in prelims. That puts him in rare company with guys like David Nolan and Jack Conger who have gone 53.0 as 17 year olds, and Valente still has a long way to go before his 18th birthday: he just turned 17 about three months ago.

(6) The girls’ 100 fly was a 1-2 finish from the state of Indiana, which is a state that all-in-all is having the most impressive of any LSC in the country at this Junior Nationals. Veronica Burchill from Carmel won in 59.63, but we were more interested in (7) Vanessa Krause of the Duneland Swim Club, who placed 2nd in 59.80.

She’s entering her junior year of high school, and swims for a club that has turned out a lot of great talent in the last few years. That includes the brothers Kyle and Aaron Whitaker (Kyle was a National High School Record holder in the 200 IM), former Purdue school record holder Albert Miller, and Notre Dame standout and 20-time All Big East honoree Bill Bass.

But it’s not since the year 2000 and Jenni Anderson that the Duneland Swim Club has had a female Olympic Trials qualifier (she would go on to be an SEC Champion at Auburn). Though USA Swimming hasn’t released the 2016 Olympic Trials standards yet, Krause’s time should almost certainly be fast enough to qualify.

Also in that 100 fly, Lauren Case (who was the runner-up in the 200 fly) swam a 59.63 to win the B-Final – (8) exactly the same as Burchill’s time to win the A-final. That shows exactly why this Junior National step is so important on the development path, as it can reinforce for young swimmers the fact that this is the deepest swimming nation in the country, and you’ve gotta be fast in prelims to have a chance in finals.

To our surprise, (9) Townley Haas didn’t swim a best time in the boys’ 400 free, which meant missing his own Meet Record by .02 seconds. After how he split his 100 free earlier in the meet, we thought for sure there was close to a 3:49 in store here. Don’t give up on him yet, and keep watching at Senior Nationals next week – the totality of his swims this week gives an indication that he might be just a few days shy of hitting that perfect taper.

1978 really makes you stop and wonder – there’s been quite a few really impressive National Age Group Records set this year, but even as fast as some of those swims have gotten, it’s hard to fathom many of them lasting for 6 years, let along 36 years. The record-breaking has both left me jaded as to how impressive the most impressive swims ever really are, and simultaneously in awe that there are some that have still stood for so long, through all of the advances in technology and training science and equipment.

Thanks, Bobo, what an amazing document in the history of US Swimming; 1978 was a year that stood the test of time!

I was serious! 😆
Mr Andrew deserved a mention for his 100 fly performance.

However, I don’t understand if your comment is a criticism or not. 🙂

One thing I learned (or I just became aware of) is that there are a number of YMCA swimmers placing at this meet. Ironically, the YMCA nationals are being held concurrently!

Another general observation is that the splits for the 800 free relay are sub par for many of the teams!

Particularly, for the girls, there was something to prove. In 1976, the American women were shut out of any Olympic gold in individual events. There was a drive by USA coaches to prove to the world that American women were the best! There was intense push that resulted in some phenomenal performances that have stood the test of time!

After the 1978 world Championships the move got going and the first US Open was for women only in First weekend in Jan 1979 at Brown Univ. As an International meet, The E. Germans sent a group and after a couple years the men were added. That was the Caulkins, Woodhead, Elkins, Hogshead, Pennington, Walsh and many others era..