10 Things We Noticed on Day 1 of the 2014 U.S. Junior National Championships 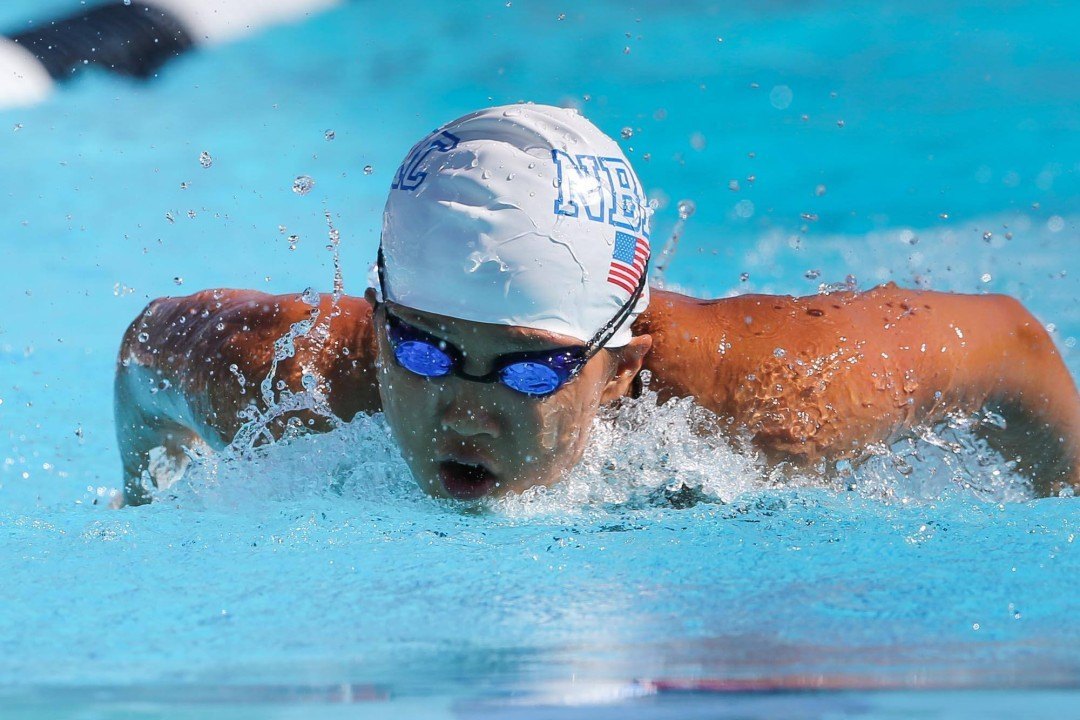 Easop Lee was one of the 10 big stories we noticed in the first finals sessions at the 2014 U.S. Junior National Championships. Current photo via Tim Binning/TheSwimPictures.com

The first night of the 2014 U.S. Junior National Championships was oddly exciting.  (1) In terms of absolute value, almost every single winning swim from this year’s long course juniors was slower than the winner from last year’s juniors on the same day, with the exception being the girls’ 800 free.

But there were some young swimmers who were really, really good, for their age.

(2) The obvious start of that conversation is Reece Whitley, who broke the 13-14 boys National Age Group Record in the 100 meter breaststroke with a 1:03.23. That swim won the B-Final, and beat out a lifetime best from 15-year old (3) Michael Andrew, who was 2nd in the same heat. Whitley broke Andrew’s 13-14 record.

But they weren’t the only two great breaststrokers in that age bracket. (4) Chandler Bray was 3rd overall in 1:02.87, making him the fastest 15-year old in the field – watch his 200 IM later in the meet. At the Indiana State Championship meet, he split 35.5 on his breaststroke leg, which is really, really fast. Corey Lau, who was 16th overall, is also 15.

There were other National Age Group Record scares as well. In the last race of the night, anybody who was watching the clock has to have been excited when 14-year old (5) Andrew Abruzzo started making a charge around the 1000 meter mark in the boys’ 1500 free. Abruzzo looked like he was on pace to break Jesse Vasallo’s 15:31.03 National Age Group Record that is the oldest still standing in the United States, from 1976. He wound up just missing in 15:36.03, but moved to 2nd on the all-time age group list: jumping none other than Michael Phelps. Michael Phelps used to be an absolute distance stud when he was younger.

Sticking with that theme, (7) 14-year old Madison Homovich took 2nd in the women’s 800 free, behind (8) Sierra Schmidt (the one swimmer who broke the “slower than last year trend).

Homovich was an 8:36.82. That’s almost the same time that Katie Ledecky went in the 800 free at Junior Nationals in 2011 to win the title (8:36.05), after which time Ledecky became…well…Katie Ledecky. There’s a long way between 8:36.0 as a 14-year old, and 8:14 as a 15-year old, like Ledecky was, and nobody should expect that kind of a drop, it’s still kind of fun to see the comparison. It’s as much of a reminder of just how far Ledecky moved in a single year than anything worthy of pressuring the young and talented Ms. Homovich.

Clearing up a mystery among our readers, Lee confirmed, in her own words today, that she is from South Korea, but that she hasn’t decided quite yet what her plans are – and at 14, there’s no reason she should have to. If she did end up swimming for South Korea she could be a game-changer for their swimming federation on the women’s side.

Scrolling through the results of that women’s 200 fly, the second-fastest time overall was all the way down in the C-Final, where (10) Hannah Kukurugya won the heat in 2:10.64.

It’s clear that most of the best US juniors don’t swim at this meet but overall I find the quality of the times pretty good. Apart from the girls’ 100 breast which was slow, the rest was interesting.
And the 14-year-old kids have made the show with Easop Lee, Madison Homovich, Max Miranda, Andrew Abruzzo and of course Reece Whitley.
Thanks for mentioning my parralel between Homovich and Ledecky. Obviously I don’t say both will have the same career but it’s funny to see that Madison makes things almost the same as Katie so far. Tom Dolan Invitational last December. US junior nationals. Now she knows what Katie has done at 14 and she almost swims the same… Read more »

Another thing I noticed is that Whitley has an infectious smile!

I think it should be known that both Reece Whitley and Andrew Abruzzo used to swim together at Penn Charter until last year. Both are absolutely incredible swimmers, who, along with two of their former teammates Alex Boratto and Connor Killion (also great swimmers) broke a NAG in the medley relay. Congrats to both of them on their incredible swims!!

Madison swam an afternoon time trial, while Katie swam in the evening winning by 3s. Madison would have swum the best time she could, while Katie might have simply swum to win, and might have saved some of her energy for later races. So the two might not really be as close as their times seem to indicate.