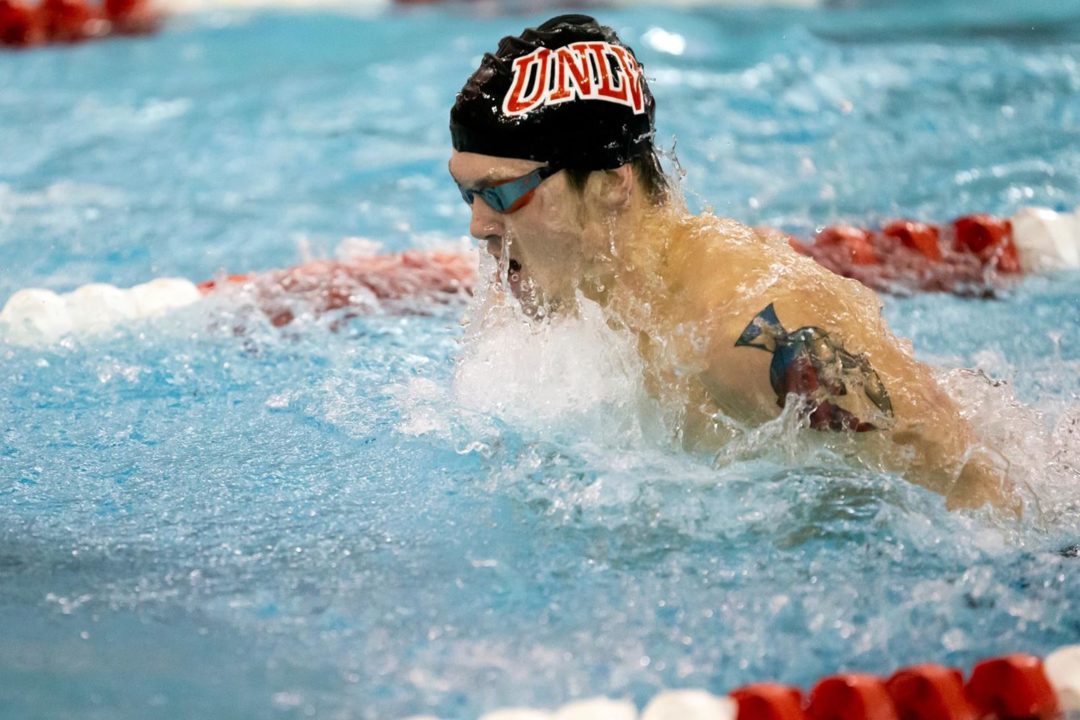 UNLV opened up a decisive lead over the defending champions Air Force on the 2nd day of the 2021 WAC Champs. Stock photo via UNLV Photo Services

UNLV opened up a decisive lead over the defending champions Air Force on the 2nd day of the 2021 WAC Champs. The Rebels head into Day 3 with a 121 lead over 2nd-place Air Force, and if they continue to expand this lead through tomorrow, they’ll have the conference title in the bag.

Vuk was followed by Rebel teammate Christopher Mykkanen, who was the defending champion in the event. Last year, Mykannen won the race in 4:21.86, then turned around and clocked a 4:18.94 for 2nd this year. Teammate Panos Bolanos was 3rd, also swimming under the winning time from last year with a 4:21.31. Cooper Kiel, a freshman, took 4th with a 4:22.58, while sophomore Cameron Castro came in 5th with a 4:23.60.

The Rebels also had a huge points haul in the 50 free, going 1-2 in that race. In an extremely tight finish between the top 5 swimmers, UNLV junior Reece Hemmens got his hand on the wall first in 19.91, with freshman teammate George Ratiu taking 2nd with a 19.93. Ratiu was just .01 seconds ahead of GCU’s Florent Janin (19.94), with UNLV’s Casey McEuen in 4th with a 19.97. Corey Shepard out of Air Force rounded out the top 5, touching 5th in 20.00, marking a .09-second difference between 1st and 5th in the event.

Air Force picked up a win in the 200 IM, with junior Isaac Gwin posting a 1:45.98. Gwin built up a lead on the backstroke leg of the race, splitting 26.45, and solidified his lead with the fastest freestyle split in the field (25.24).

Cal Baptist sophomore Evan Honer was dominant on the boards tonight, taking the 1-meter diving title with a final score of 352.60. The score was 45 points ahead of the next closest diver, and was just short of the WAC Champs record of 357.05, and the conference record of 358.65. As just a sophomore, Honer has plenty of time left to chase those records.