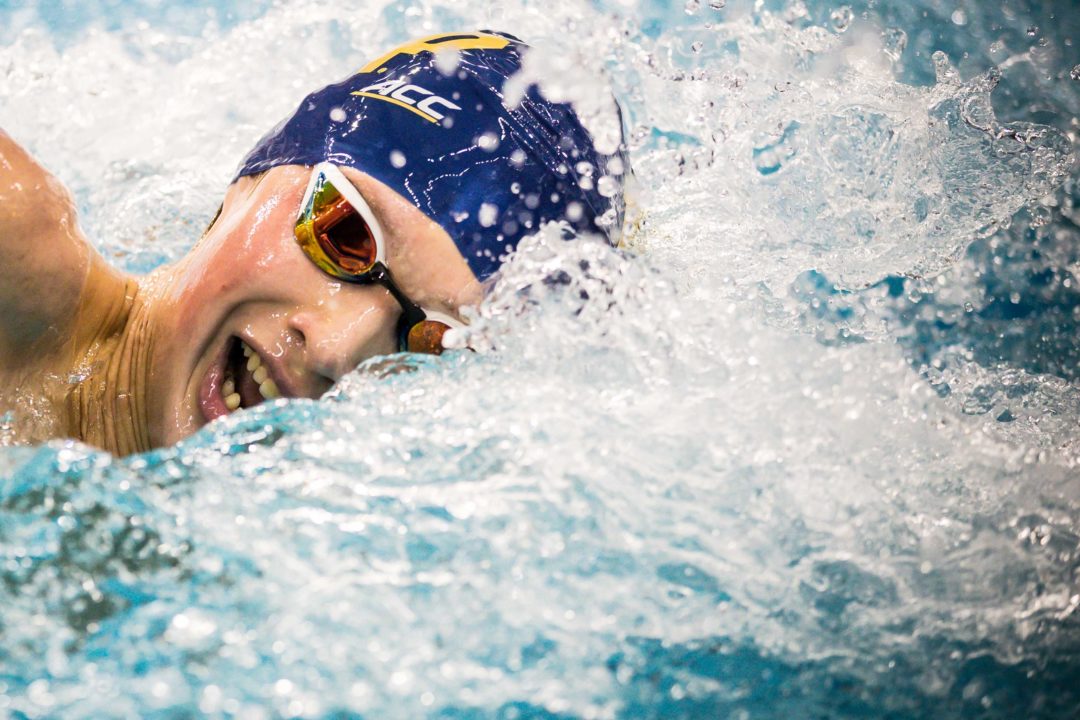 Zach Yeadon blasted a 8:57 in the 1000 free, the fastest time in the nation so far this season, as the Notre Dame men and women both beat FSU. Current photo via Jack Spitser/Spitser Photography

The Fighting Irish had three women win two events each as they won 9 of 12 individuals events to beat the Seminoles, 226.5 to 183.5.

Freshman Coleen Gillilan made the most of her debut for the Fighting Irish, winning the 100 fly in 53.32, and then coming back in the very next swimming event to win the 200 IM in 1:59.60.

It wasn’t nearly as close in the next event, the 1000 free, as Notre Dame distance star Zach Yeadon blasted a 8:57.69. Yeadon won by a whopping 23 seconds, registering the fastest time in the nation so far this season, and setting a Notre Dame pool record in the process. Later in the meet, Yeadon completed the freestyle sweep with a 4:20.63 in the 500 free, a time that puts him 3rd-fastest in the still-young season.

Florida State has been known over the past few years for the sprint freestyles, but they’re in a bit of a rebuilding mode after losing a lot to graduation. Still, they got sprint free victories from freshman Peter Varjasi, who took the 44.97 in the 100 free, and sophomore Kuba Ksiazek, who’s the only returner front the Seminoles’ All-American 400 free relay, and who won the 50 free in 20.51.

“We had a great meet,” FSU head coach Neal Studd said. “We fought hard. We just came up a little short. We’re excited with how well our newcomers competed and we’re looking forward to a great season.”

Sophomores Izaak Bastian and Nina Kucheran led the Noles with three wins each, including both the 100 and 200 breast.  Freshman Peter Varjasi and senior Griffin Alaniz were each a part of two victories.

The Seminoles outlasted the Fighting Irish (1:29.13) in the men’s 200 medley relay behind  Alaniz, Bastian, sophomore Max McCusker and Varjasi at 1:29.00.

Notre Dame answered with big swims in the 1000 free and 200 free, but the Seminoles rallied with four wins in the next five events, starting with Alaniz in the 100 back with a time of 48.64.

The Seminoles got a big boost in the 100 breast as Bastian and Varjasi provided a one-two finish with time of 55.04 and 55.64 respectively.

FSU capitalized on the 50 free with another first and second place showing behind sophomore Kuba Ksiazek (20.51) and freshman Ian Cooper (20.89). McCusker (21.05) and freshman Francesco Peron (21.11) were fourth and fifth.

The Seminoles were dominant on 1-meter behind junior Joshua Davidson and senior Cam Thatcher. Davidson won with a score of 321.45 ahead of Thatcher in second at 317.18.  Davidson later added second place points on 3-meter with a total of 340.73, while Thatcher was fourth at 291.23.

Notre Dame reclaimed and extended its leads behind a sweep on the 500 free, but the Noles exercised its depth in the 100 fly as McCusker placed second at 48.99, followed by senior Vladimir Stefanik in third (49.11) and freshman Domen Demsar (50.52) in fifth to keep the meet within reach for the Seminoles at 114-131 with three events to go. But, the Irish added another sweep in the 200 IM, to claim the meet.

In the 400 free relay, the Seminoles and Irish went wire-to-wire behind Varjasi, Peron, Ksiazek and Stefanik, turning in a time of 2:58.17 for second place.

The team of freshman Tania Quaglieri, Kucheran, along with sophomores Aryanna Fernandes and Kertu Alenk won the women’s 200 medley relay with the time of 1:39.39.

Senior Ayla Bonniwell edged out Irish diver Kelly Straub on 1-meter for the victory by 0.68 with a score of 301.28. Her classmate, Molly Carlson added a second place finish on 3-meter with a score of 275.48.

The team of Moynihan, freshman Lizzie Harris and sophomores Lauren Hew and Alnek clocked a time of 3:25.16 in the 400 free relay for second place.

Florida State will host Virginia Tech and Duke on Oct. 12 at 10 a.m. at the Morcom Aquatics Center. In addition to celebrating parents weekend, the Seminoles will welcome a special member of Team Impact to the team following the meet.

After the visiting Seminoles touched first on men’s and women’s 200 Medley Relays, the Irish came back strong with two first-place finishes in the 1000 Free by Lindsay Stone and Zach Yeadon. Yeadon broke a pool record, finishing with a time of 8:57.69, the fastest time in the NCAA this season.

From there, the Irish attack took shape, as Abbie Dolan and Sadler McKeen brought home wins in the 200 Free, while Bayley Stewart touched the wall first in the women’s 100 Back. Jack Montesi came in second in the men’s 100 Back, just .13 seconds shy of Florida State’s Griffin Alaniz.

Notre Dame extended its lead with multiple top-three finishes in the 100 Breast, and Max Miranda kept the Irish hot with a win in the 200 Fly. Notre Dame women topped the 50 and 100 Free events, with Rachel Wittmer (50) and Abbie Dolan (100) touching the wall first.

Stewart brought home her second victory of the night in the 200 Back, while Montesi did the same on the men’s side. The Irish swept all three top places in the men’s and women’s 500 Free, with Luciana Thomas touching the wall first for the women (4:56.65) and Yeadon nearly breaking another pool record with a time of 4:20.63 (.29 off the record).

The Irish kept gliding with wins on both sides of the 100 Fly, courtesy of Coleen Gillilan and Zach Smith, while Gillilan and Miranda earned the victories in the 200 IM. Finally, Notre Dame swept the 400 Free Relays, culminating in an Aaron Schultz come-from-behind swim to earn a victory for the Irish men, extending the lead over Florida State.

On the other end of the pool, Irish divers Kelly Straub and Austin Flaute won the women’s 1m and men’s 3m contest, respectively. Straub finished second in the women’s 3m competition, and Flaute earned a third-place spot in the men’s 1m.

The Irish won soundly on both sides, with key performances from younger swimmers and other veterans.

“The rookie class, they seemed to show their depth and lived up to their ability. We weren’t quite sure what we were going to get, but we found our identity a little bit,” Notre Dame Head Coach Mike Litzinger said. “Sadler McKeen, Aaron Schultz, Jack Montesi, [and] Max Miranda had improvements tonight, so what we’re doing is starting to go down our depth chart and find out if those athletes are really rising to the occasion.”

The Irish head to Lexington next week to take on Indiana and Kentucky in their first road meet of the season.

“It will be a really good test, another opportunity for us to continue to grow,” Litzinger expressed. “I’m really looking forward to having an opportunity against those quality teams.”

Crazy to me that Yeadon can drop an 8:57 and then step up and go 44.5 on a free relay at the end of the meet. Dude has no chill in dual meets.