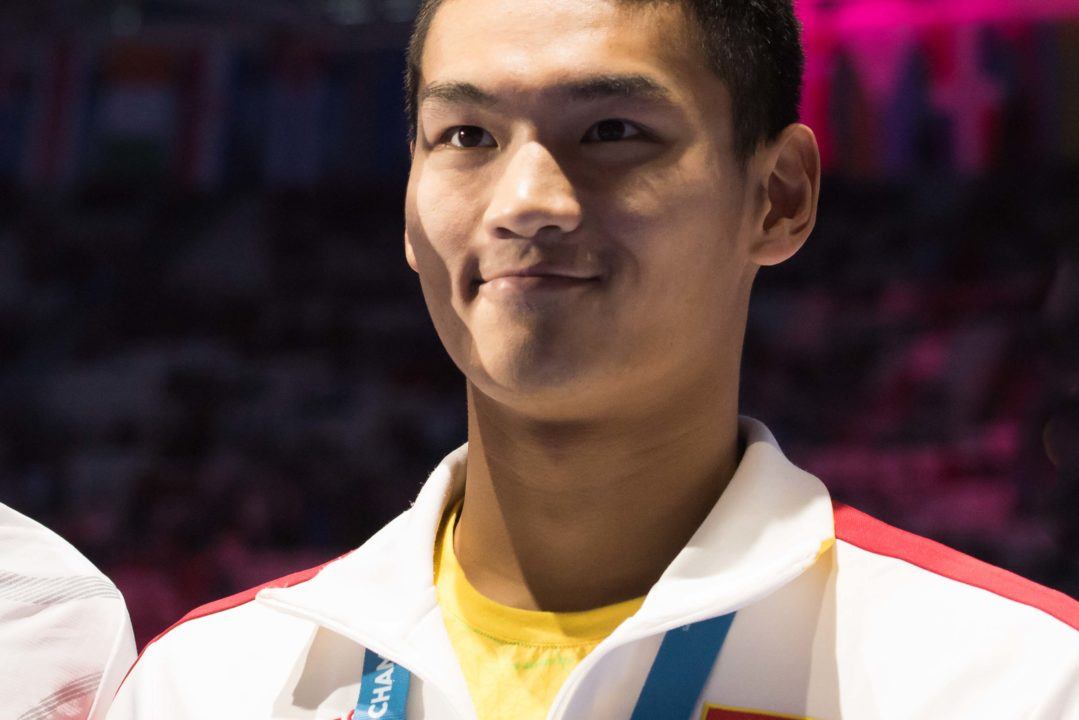 Shedding some tears on the podium, Chinese backstroking champion Xu Jiayu said, "I realized all the pain I suffered to get to this gold medal." Current photo via Mike Lewis/Ola Vista Photography

Last night Chinese backstroker Xu Jiayu made history for his country by becoming the first man ever to win a gold medal in the men’s 100 back at a World Championships. The 2016 Olympic silver medalist in the event, Xu split 25.12/27.32 to take the top of the podium in Budapest in a final time of 52.44 over current world record holder Ryan Murphy and teammate Matt Grevers, who finished in bronze and silver medal positions, respectively.

Although Xu wasn’t exactly happy with his time, as he was within .01 of the 51.85 world record at this sprint’s Chinese Nationals, he could not deny the emotions that overwhelmed him once receiving his gold medal.

“At first, I felt happy because I won, but moments later, I realized all the pain I suffered to get to this gold medal,” he told Xinhuanet.

“When I finally tasted victory at the worlds, I suddenly felt a bit nervous,” he said. “After the semifinals yesterday, I thought that it was possible to beat the world record, but I didn’t give myself any surprise, which I felt a little disappointed about.

“My results have progressed in a consistent way. I could have hit the benchmark of 52 seconds back in Rio, but I was too nervous in major tournaments to perform at my normal level. This time, I was also quite nervous here and could only win by a small margin.

“I won the title by only four hundredths of a second, and I met tough challenge to resist the pressure from other opponents.”

Great man and a great win to beat out 2 Olympic champions and the WR holder.