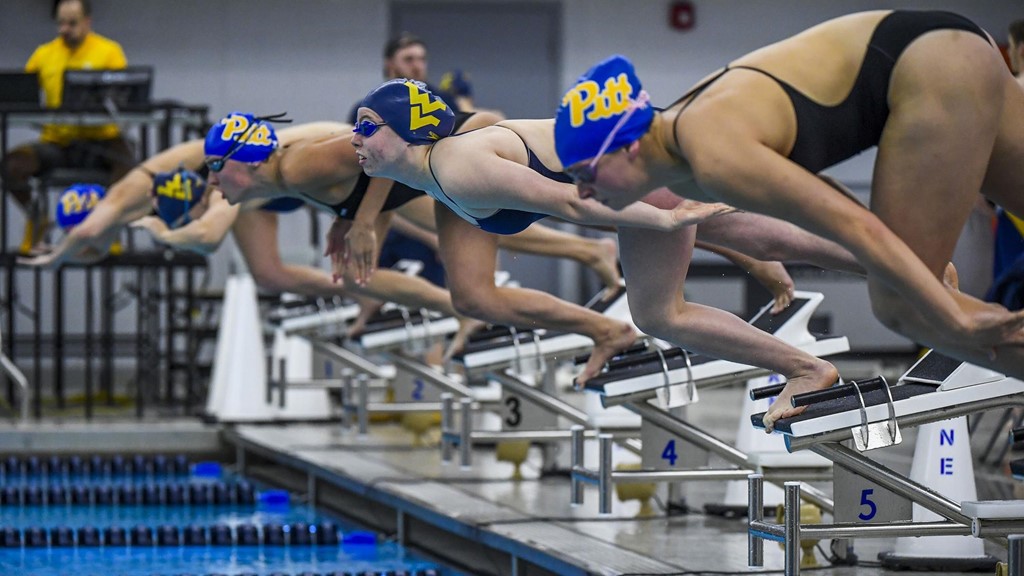 The Mountaineer men topped the Panthers 179.5-120.5, while the Pittsburgh women defeated WVU 175-125 at the 2020 edition of the Backyard Brawl. Current photo via West Virginia Athletics

MORGANTOWN, W.Va. – Senior Morgan Bullock and junior David Dixon of the West Virginia University men’s and women’s swimming and diving teams led the way with multiple victories against rival Pitt in the Backyard Brawl on Saturday morning at the Aquatic Center at Mylan Park in Morgantown.

“Today’s performance was really good for both teams,” Mountaineer coach Vic Riggs said. “Our women’s team has some challenges ahead of them with some injuries, but for us to score 125 points today was great and more than we scored in this meet last year. For the men, from the beginning to the end, it was a really good meet. Everybody swam very well. The divers came through huge for us on the boards, and it was just a very solid day.”

Saturday’s action opened with the 200-yard medley relays. The women were up first, and the team of Bullock, senior Julia Nilton, junior Ally VanNetta and freshman Mathilde Kaelbel grabbed second place after touching the wall in 1:45.61. The men followed with WVU’s first win of the day, as Dixon, junior Angelo Russo, sophomore Fausto Huerta and freshman Hunter Armstrong combined to finish in 1:28.24.

In the diving well, sophomore PJ Lenz swept the competition, taking first place on 1- and 3-meter. He tallied an NCAA Zones-qualifying and career-best score of 318.82 on 1-meter and a score of 316.72 on 3-meter. Redshirt sophomore Jacob Cardinal Tremblay grabbed third place on 1-meter (297.90) and second place on 3-meter (306.30).

“I’m really happy with the divers today,” WVU diving coach Michael Grapner said. “They rallied and represented well as a team. I’m happy with Camille, who qualified for Zones on 1-meter and was very consistent throughout the day. PJ was in the zone all day, taking first in both events. He has been working really hard, and it shows in his results.”

Back in the competition pool, WVU tallied a pair of third-place finishes in the 1,000 freestyle, as senior Alex Pampalone paced the women (10:45), and freshman Zach Boley led the men (9:45.03).

Junior Giselle Gursoy and sophomore Emma Bliss then finished side-by-side in the 200 free. Gursoy took third (1:55.10) and Bliss followed in fourth (1:55.31). In the men’s event, Armstrong tallied WVU’s first individual win of the day after touching the wall in 1:39.83.

Up next was the 100 backstroke, and VanNetta grabbed second for the women in 57.51. Russo recorded his second win of the day in the men’s event, touching the wall in 48.31. Huerta then tallied another victory for WVU in the 100 breaststroke (55.56), while Kaelbel finished second on the women’s side (1:07.27).

Bullock and Dixon next showed off their power in the 200 butterfly. The duo grabbed a pair of victories in the events, as Bullock touched the wall in 2:01.70 and Dixon finished in 1:46.20.

The meet concluded with the 200 freestyle relays, where the women grabbed a victory and the men tied for first with the Panthers. Haimes, Nilton, Bliss and Gursoy touched the wall in 1:35.55 to get the win for the ladies, and Armstrong, junior Christopher O’Shea, senior Sam Neaveill and Van Wyk finished in 1:21.76 for the first-place tie.

Up next, WVU is set to travel to the Longhorn state for a pair of dual meets. On Friday, Jan. 17, the men’s team will compete against SMU at 6 p.m. ET in Dallas. The following day, the men’s and women’s teams will square off against TCU in a Big 12 dual meet beginning at 11 a.m. ET in Fort Worth.

The 11 seniors on the Pitt women’s roster will all graduate with an undefeated record against their rivals from Morgantown. This marked the 26th consecutive season that Pitt and West Virginia met in a swimming & diving Backyard Brawl dual meet.

Saturday also saw the Pitt men lose in Morgantown, 179.5-120.5, as the home team won for the sixth consecutive year in the men’s swimming & diving edition of the rivalry.

“It’s always a challenge coming to West Virginia,” Pitt head coach John Hargis said after the meet. “The men lost some close races early and that deflated us a bit. We have to be better in times of adversity; that’s an area where this team is still growing. I’m proud of the women for taking control of the meet early, but they also need to finish more emphatically. We will use this as a learning experience as we continue training and preparing for the championship season of February and March.”

Leading the way for the Pitt women were several seniors. Valerie Daigneault (100 Back, 200 Back), Sarah Giamber (500 Free, 1,000 Free), Madelyn Shaffer (200 Free) and Krista Jones (3-Meter Diving) each won events to help ensure another victory over West Virginia in their Pitt careers.

“It was great to be back with the team for an intense competition like the Backyard Brawl,” said Hazelton, who was out for some of the fall semester while on maternity leave after having her first child. “The divers produced some strong moments, including wins by Krista and Amy that helped the women win the dual, but we certainly have work to do to be ready to perform at our best later this season at the ACC Championships and NCAA Zone Meet, which will be held here at WVU’s new pool.”

For the Pitt men, freshman Wojciech Dutkowiak swept the distance events (500 Free, 1,000 Free) by winning each race in dramatic, come-from-behind fashion. Junior sprinter Blaise Vera got his 2020 off to a strong start by winning the 50 Free and 100 Free with impressive performances. And freshman Jerry Chen recorded a victory in the 200 Breast with a great swim that stunned the home crowd.

Pitt swimming & diving will be back in action on Friday, Jan. 17 for a sprint dual meet with Division III powerhouse Denison from Ohio. That meet begins a stretch of three weekends in a row that the Panthers will host competition at Trees Pool as they finalize preparations for the ACC Championships.

Coach Riggs has done wonders with the Mountaineers. The new pool is truly ” All Most Heaven.” A few more recruiting classes and WVU will be the beast of the Northeast.