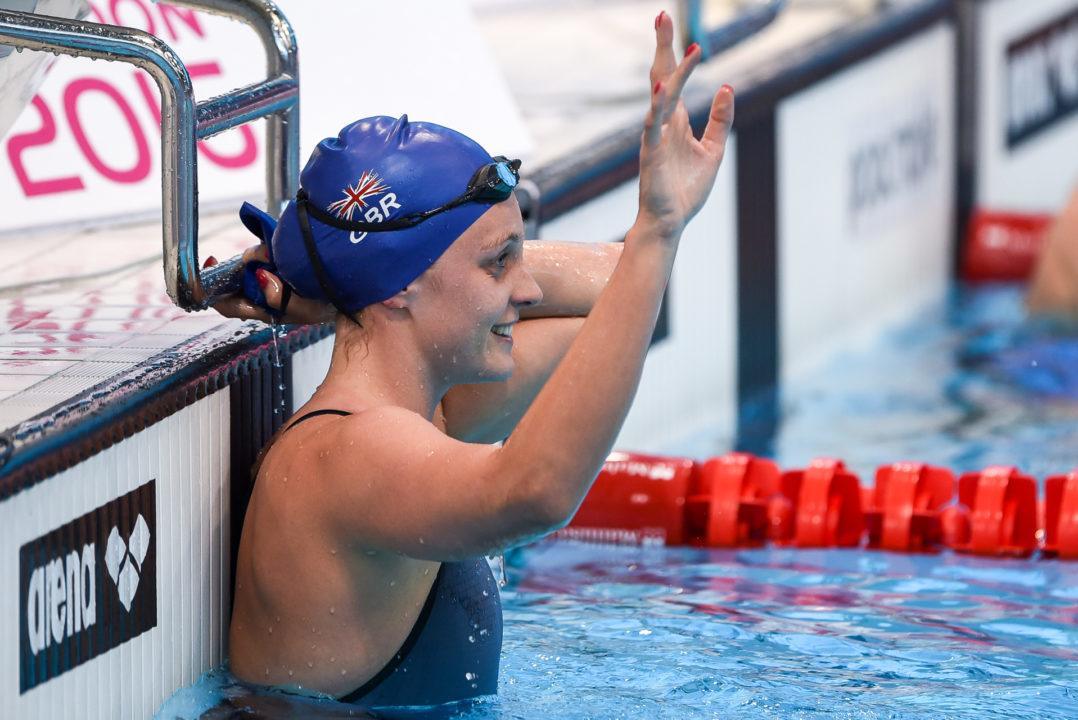 British Swimming superstar Fran Halsall has announced her retirement from competitive swimming after a decade at the top level of the... Archive photo via Peter Sukenik/www.petersukenik.com

British Swimming superstar Fran Halsall has announced her retirement from competitive swimming after a decade at the top level of the sport.

“Announcing my retirement from swimming is a weird concept to me as I’ve never seen it as a career or a job,” Halsall Tweeted out early Monday morning. “Just as a hobby that I’ve loved doing and happen to be ok at. However I’ve done it for a decade and there are so many people who have committed time, money, wisdom and knowledge into my journey that I will forever be thankful for.

“Stepping away from the pool is quite a scary decision for someone whos [sic] whole adult life to date has revolved around swim, weights, diet, peeing in a pot while someone watches, outdoor swim camps (yey) and lots of napping. I am very much looking forward to the next chapter of my life and the normality of eating and drinking what I want, the only time someone watches me pee is when I leave the door open by accident and the dog comes in and experiencing the mythical bank holidays. I will miss my daily naps and choosing to do sets backstroke while training outdoors just to get an even tan it’s time to close this chapter of my life and move on to the next.

“Swimming has taught me so much and given me opportunities that no other career could. So for me this is just a thank you note to everyone who has supported me for being part of a fantastic set of memories.”

The 26-year old Halsall competed for Great Britain at the 2008, 2012, and 2016 Olympic Games. Her closest run at a medal came in Rio in the 50 free, her only race at her last Olympic Games. In that race, Halsall led for 45 meters, but eventually succumbed to a 4th-place finish, placing just .02 seconds away from the podium and .06 seconds away from gold.

Her career did include 9 World Championship medals – of which 3 came in long course. She was the silver medalist in the 100 free in 2009 in Rome and the bronze medalist in the 50 free in 2013 in Barcelona. In 2015, she took her only World Championship gold when Great Britain won the 400 mixed medley relay – which still stands as the World Record in the recently-recognized event.

Not exactly but the very similar mood of farewell letter as we saw it in David Plummer’s departure.

She is content in her life now. Settled with her partner, former England rugby player Jon Wilkin. She was talking about their first home together in the news a few months ago and their new addition, a puppy. It all sounded like the start of a new chapter for her, and I’m pleased she has found happiness in leaving her goggles behind.

She achieved a hell of a lot – But, I’ll always feel she could have been the best. Her 23.96 was astounding and you’ll never see a woman faster between 15 – 40… Turnover was a sight to behold.

Enjoy retirement, you are and always be a legend to British swim fans. Who’ll replace that laughter in… Read more »

Of course the big question is – what sort of dog? If ever I get annoyed at the English I always think – but they love dogs & the seratonin induced drives away the bad brain chemicals . We can’t get to choose our kids so there are always doggies .

Great words to announce her retirement from swimming. She has a good sense of humor.
Great sprinter. Good luck for the rest of her life.

Had Fran been a US or Australian swimmer, she would have had at least a couple of Olympics golds.

The clock never lies, but in swimming, having the right country for citizenship matters when it comes to winning medals.

Not everybody wants to be American or Australian for the sake of relay gold medals even they do have such an option: Penny Oleksiak or Katinka Hosszu for instance.

Where did I say that Fran Halsall needs or wants to be American or Australian for the sake of relay gold medals?

Nowhere. Where did I say you said that ? 😀

I’m quite sad for this news.
Perhaps because of her Italian name, surely because she was a clear swimming talent, with an amazing natural speed, Francesca Halsall was in the top ten of my favorite swimmers of last decade.

Her (swimming) prime was gone, ok, and I remember that disgraceful end of 2010, in which Commonwealth Games were given in Delhi: the 20 year-old Halsall seemed ready for leading the World ranking in 50 and 100 free, but then had some health troubles and the magical moment of the “pocket bullett” had an abrupt stop.

After that, other bright moments and great performances, but no longer she gave that feeling of swift and sure growth.

Knee jerk decision, should stay fit and keep strong and reconsider in January 2019 if she still wants it, Torres and Ervin have taught us with mental and physical rest and been extremely talented you can excel in the 50 well into your mid 30’s.
It’s simple go 24.0 and u medal, she can already do that, just needs to be on the day, she was unlucky in Rio.
Good luck in life after swimming tho.

It’s quite an injustice that Halsall doesn’t have a single Olympics medal to her name while a bunch of lesser swimmers have Olympics golds.

Injustice?! What are you talking about? The sport cannot exist if somebody isn’t losing. There are very few examples when a swimmer races against clocks but not against some other guy who happens to be at the moment not that much rested or two inches shorter or not being healthy at the time of the race or having smaller feet size, or just being older… whatever. Someone who is the loser at the moment who we are more than happy to beat. Sport was always about having unfair advantages: either given by God or from the local pharmacy or better coaching and training facilities unaffordable by someone else.
Injustice. Give me a break.

I think his point is – Mediocre swimmers (I could name on the British team alone) on relays have Olympic golds for swimming average times but having a superbly talented team-mate or two. Some have them for simply swimming a heat.

Nobody suggesting that’s wrong, it’s sport, but it certainly feels like an injustice.

Listen guys. This article is about great swimmer leaving the competitive sport. It is a sad news. Let’s thank you for the pleasure she gave us with her races and let’s wish her the happiness in the future. Let’s leave the discussion of what competitive sport actually is for another time in different thread. Thank you.

You have some serious reading comprehension issue.

Read Dee’s for more simple and clearer explanation of what I actually meant.

Sure I do especially in comparison with you. Do you think it is an example of injustice? 😀