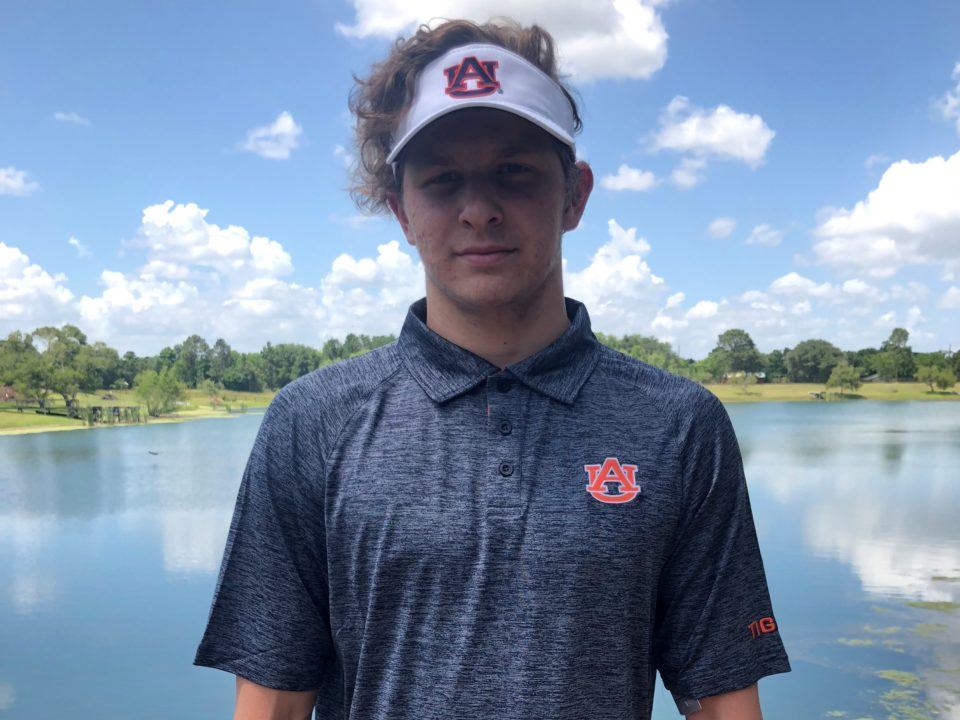 2019 World Junior Championship team member Jack Armstrong has entered the NCAA transfer portal. Armstrong swam his freshman season at Auburn in 2019-2020, where he scored 1 point via a 24th-place finish at the 2020 SEC Championship meet.

“I thoroughly enjoyed my time at Auburn,” Armstrong said of his decision. “Auburn is an up and coming program with an enthusiastic coaching staff, so leaving was a very difficult decision.”

In high school in Manvel, Texas, Armstrong was a 4-time Texas 5A (smaller schools) State Champion individually, winning the 50 and 100 free in both his junior and senior seasons. In 2018, he was also the Winter Juniors – West champion in both the 50 and 100 free.

“Now that I am back in Houston, I plan to begin training with my club team,” Armstrong said about his future plans. “Once I can start racing again, I will then see what steps I want to make moving forward.”

The Auburn men finished 8th out of 10 teams at the 2020 SEC Championship meet. While the Auburn women’s sprint group showed big sparks in year 2 under the administration of head coach Gary Taylor, sweeping the 200 and 400 free relays in SEC Meet Records in both, the men’s sprint relays were improved, but not at that same level. Including a legal-start 19.35 split from Armstrong, the 200 free relay was disqualified after touching the wall 4th, while the 400 free relay was tied for 5th.

Wants to come home to Aggie?

Possibly…, 4 seniors graduate; we have 8 incoming freshmen that I’m definitely aware of (could be a couple more that I’ve either overlooked or am not aware of). Doubtful that there is very much scholarship money left in the pot but hopefully I’m wrong about that!!!

In-state tuition is relatively low.. May balance out given he was out of state at Auburn on a partial ride?

Hoping you are right!

SEC to SEC would that not force a year of sitting out?

I believe he’s at least the second Auburn Freshman to enter the portal?!

Yeah… I would guess lots of transfers coming in the next few years.

It was probably pretty tough for him watching that previously no-name LSU freshman light it up at SECs, when he didn’t really improve.

Yes. Social distancing now means the transfer route is going to be Auburn to ASU to Indiana and then maybe back to Auburn.

Thanks for clarification! Sorry for misunderstanding what you meant by “legal start”

Just giving all of the important context. A 19.3 if you leave .16 early is not as fast of a swim as a 19.3 with a legal start. And, given that the relay was disqualified, surely someone was going to wonder if his 19.3 was legal or not.

Your shade denial is not credible.