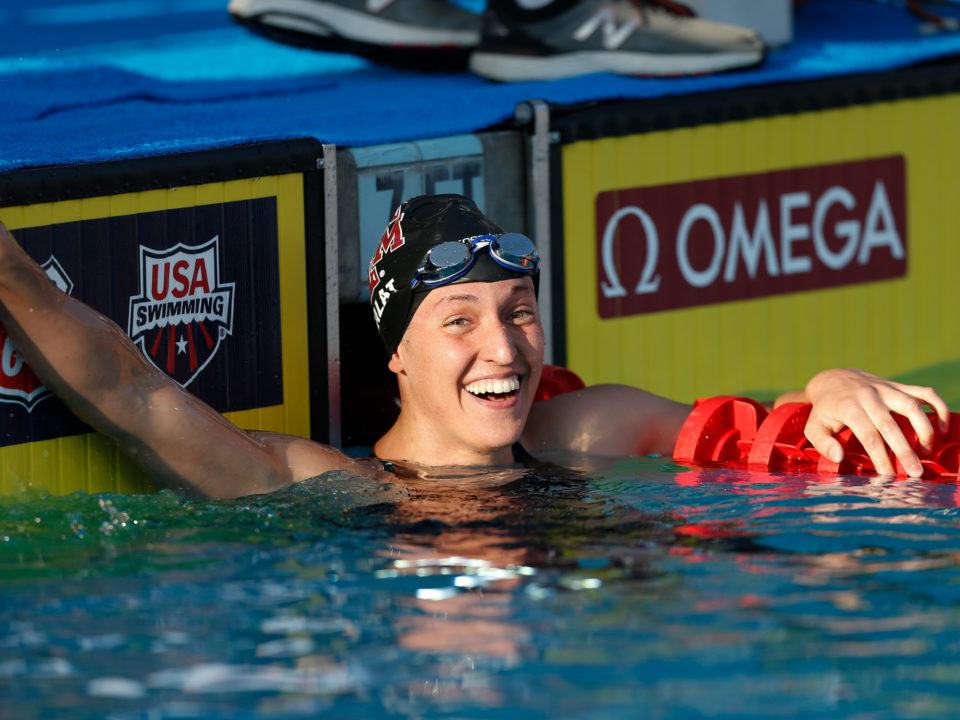 World Championships medalist and NCAA All-American Bethany Galat announced her retirement from swimming Monday on Instagram. Galat has been competitive on the national-level since high school and has been one of the USA’s top breaststroke and IM specialists of the past two Olympic quads.

Galat swam at Texas A&M University and is the program record holder in the women’s 200 yard breaststroke, set in 2018 at a 2:03.26 at the NCAA Championships, placing 2nd. Galat is also the 2nd-fastest performer in Texas A&M history in the 200 IM and 400 IM, and is ranked in the top-10 in the 100 breaststroke and 200 butterfly. In addition to her runner-up finish in the 200 breaststroke at NCAAs in 2018, Galat placed 4th twice and 5th four times individually at the NCAA Championships. Galat was also the 2017 SEC Champion in the 200 breaststroke, pulling the upset victory out of lane 8.

Galat won 5 individual Indiana high school state titles from 2012 to 2014, capturing 3 wins in the 200 IM and 2 in the 100 breaststroke. In 2014, Galat’s hometown of Mishawaka, Indiana declared August 18th Bethany Galat Day in honor of her winning high school multiple state titles, among other accomplishments in the pool.

Galat was recently named to the 2021-2022 US National Team for the 100 and 200 breaststrokes. She represented the DC Trident in the 2019 and 2020 seasons of the International Swimming League.

Bethany is a pious name & its nice to see it is well chosen & suits her. When I type Galat it comes out as Galatians . Not that I know what’s in it but auto correct fun for the day.

Always a pleasure to watch! Even after missing medals, olympic teams, or other she was always congratulating her competitors with the biggest of smile !

Good luck on your next chapter

The best of the best! Such a quality person! Congrats

Congrats as being the best taper swimmer in the world!! Wishing you the best in your next adventure outside of the pool!