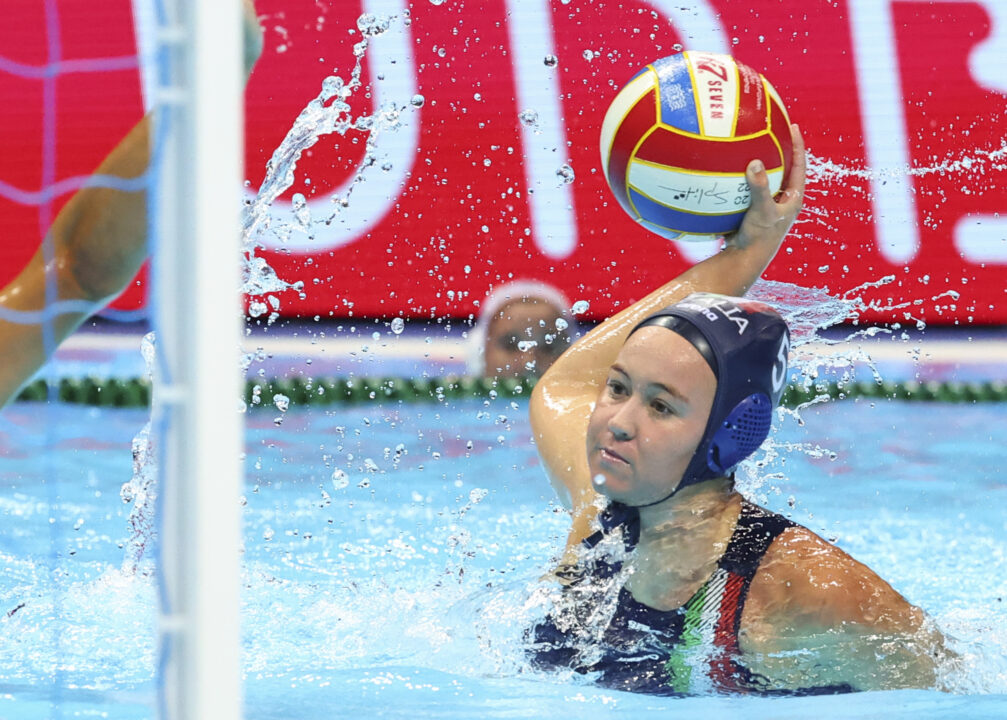 France played another tight match, this time coming out on top of a one-goal affair with a 15-14 win against Serbia. The Netherlands dealt Hungary a 13-4 loss, its worst defeat since 1985. Croatia stunned Germany with a seven-goal victory in front of hundreds of home fans, and Italy shocked Spain with a 12-9 win against the defending champs. In other action, Israel stayed hot with an 18-7 rout of Slovakia, the nation’s highest scoring output by a significant margin (Israel’s previous single-game record at Euros was 11).

Hungary, the defending bronze medalist and recent silver medalist at the World Championships, had bested the Netherlands during their previous three matchups (the bronze medal game at the 2020 Euros, Olympic quarterfinal in Tokyo last summer, and World Championships semifinals in July) heading into Sunday’s showdown. But the Dutch got revenge in a big way, holding Hungary scoreless for nearly 17 minutes en route to an 11-goal blowout.

The Netherlands netted two goals in less than a minute to jump out to a 5-1 lead early in the second period. The Dutch stretched their advantage to 10-3 heading into the final period to put the game virtually out of reach.

The 13-4 final marked Hungary’s worst defeat in 37 years, which came back at the first edition in Oslo. The opponent then was also the Netherlands, which ran away with a 19-4 win.

“It’s hard to say anything after this match,” Hungary’s Vanda Valyi said. “We did not play water polo, we just jumped into the water and something just happened and I don’t know exactly what. There were 13 players from our side and we were not playing as a team, instead the 13 played individually in the pool against the Netherlands.

“This performance was so weak,” Valyi added. “I don’t know exactly the reason for that — maybe it’s a mental or physical problem, or both — we need to find out what it is exactly. We are so devastated after this result.”

Netherlands head coach Evangelos Doudesis thought the lopsided result was a bit of a fluke against a typically tough opponent.

“At this level there is no easy game and what happened today is an exception, as we all know that there is no such difference between these two teams,” Doudesis said. “Hungary is one of the best sides in the world; today we just bettered them in many elements. Many if not all the small details favored us, and that led to that result. But again, we never expected this and we cannot think that we are that much better than the Hungarians. We had a great game, which is good, but we have to move on.”

In another unexpected blowout, Croatia roared out to a 5-1 lead and led 10-3 heading into the fourth period. The Germans went with an aggressive 7-on-6 offensive approach bringing out goalie Darja Heinbichner, who found the back of the net once as they battled back within 12-8. But Croatia scored the final three goals of the match to seal the victory on home soil.

Croatia cruise to victory in front of a noisy home crowd, with goals from the Butic sisters and 𝐬𝐢𝐱 from Emmi Miljkovic 🇭🇷

Up next: @waterpolodames vs. Hungary LIVE on LEN TV 📺 pic.twitter.com/6lAt3wARab

“I expected to play a good game with the Germans — I knew that we were the better ones technically so I hoped that we could win the game — but of course it never ever crossed my mind that we would lead 11-3 at the beginning of the third period,” Croatian head coach Aljosa Kunac said. “It was all about sticking to our game plan and giving our very best and maximum both in defense and in attack. This is a great victory and I hope that fans will come now to support this team, the players deserve it.”

Croatia appears to be in good position to sweep its first three games of the group stage with Romania on its schedule next.

“This is the goal we set: to win against Germany,” said Emmi Miljkovic, who led Croatia with six goals. “Basically, we have been preparing for this ever since we found out the draw. We will rest in the morning and start getting ready for Romania tomorrow afternoon. We want to win that match too. We must stay calm and prepare for it the best we can.”

Despite having just 14 hours to recover after Saturday’s thrilling victory over Hungary, Greece kept its momentum going with a 24-3 thrashing of Romania.

Greece 🇬🇷 is on a roll at #wp2022split! Can they go all the way at the Women's Europeans?

With the quick turnaround between games, Greece head coach Alexia-Anna Kammenou opted to start her younger players and the move paid off. An eight-goal first period set the tone for the 21-goal win.

“We had a really tiring match last evening so today I gave more opportunities for the younger players and it worked as we were fresh in the first period and played really well,” Kammenou said. “Today we focused on practicing some elements we wish to use later, also let the younger players learn the schemes more in match situations so the number of goals we scored didn’t matter at all. The goal we wanted to use this game for was achieved so I’m really satisfied.”

In perhaps the most anticipated match of the evening, Italy held off a late rally by defending champion Spain to secure a three-goal victory. Trailing 4-2, Italy piled on five goals in a row to pull ahead. Italy went on another run in the third period before Spain scored three straight to climb back within 11-9.

Two wins out of two for the Italians 🇮🇹

Chiara Tabani puts three past Spain, as @FINOfficial_ wins 9-12 on day 2 of the #wp2022split group stages.

“We have been working a lot on the mental approach to the game, so we were focused on that aspect of the match,” Italy’s Claudia Marletta said. “We also tried to play aggressively throughout the whole game. This victory means that we will have an easier rival in the quarter-finals. That was our first goal here. We want to redeem ourselves for what happened at the World Championships, where we finished fourth. I hope that we have learned our lesson.”

Goalkeeper Caterina Banchelli was brilliant for Italy, saving 10 of 19 shots on target. Spain totaled 35 shots to Italy’s 22, but the Italians were efficient in converting more than half of those opportunities.

“I’m disappointed,” Spanish head coach Miguel Oca said. “We did not find the goal of Italy, there were a lot of missed shots, out of nowhere. We didn’t play well during this game, so I’m not happy at all. We need to check what was the problem because I cannot understand our performance today after the game we played yesterday.”

Next up for the Italians is a meeting with Israel, which has been on a roll so far with wins over Slovakia and France.

“We did a great job in man-up, everything was in the right place both in the defense and in the attack as well,” Italian head coach Carlo Silipo said. “Spain was a strong opponent, but we managed to win against them with great teamwork. Our next match is against Israel, obviously that is going to be an easier match, but we need to improve a bit.”

Only 12 hours after losing to Israel on Saturday, France struggled against Serbia before ultimately prevailing in another one-goal thriller.

“After the match yesterday, we didn’t have a lot of time to rest, but we showed that we can concentrate on the game and we can win the match,” French head coach Emilien Bugeaud said. “We played against Serbia before the European Championships in some friendly matches, so we knew how they play. I am satisfied with my team’s performance.”

Serbia took an early 5-4 lead, but France responded with four goals in a row to surge ahead 8-5. Serbia rallied back up 11-9 before France’s Estelle Millot answered to make it 11-10 heading into the final period.

Millot poured on two more scores within 34 seconds early in the fourth period to give France a 12-11 lead. The two sides went back and forth over the final minutes until Louise Gillet lasered home her fourth goal of the game with nine seconds left on the clock to put France in front for good.

“It was a tough game today,” Milot said. “Both teams played very well, and it was like every action was important and every detail mattered in order to win. I have to say that it was very difficult to change our mind after yesterday’s defeat, but we did it. We managed the situations, today’s victory is very important for us because of the future crossover matches, and for to have a winning mindset again.”

Israel continued to show improvement two years before the country is set to host the 2024 Euros for the first time. The nation’s latest win has the program poised for its first quarterfinal appearance in three appearances at the tournament.

When Israel first debuted at Euros in 2018, the team mustered 22 goals across six matches. Israel nearly reached that mark on Sunday in its 11-goal victory over Slovakia.

Israel climb to the top of Group B at #wp2022split after securing their second W with some great plays 👏#waterpolo #experiencewaterpolo pic.twitter.com/3MU2B9mdad

With the match tied at 2-2, Israel exploded for three unanswered goals to go ahead for good. In the third period, the offense piled on three goals in 73 seconds to extend the lead to 10-3.

Despite the favorable result, Israel seemed hungry for more as players looked ahead to a huge showdown with Italy on Tuesday.

“Once again we didn’t start the match well,” Israel’s Maria Bogachenko said. “We could have done it a lot better and much stronger. Later on, we managed to get into our rhythm which allowed us to score more goals. Our next match is against Italy. It will be tough, we will give our best and we are hoping for a surprise.”

“This wasn’t our best game but I am happy that we secured our second win here,” Israel’s Noa Sasover added. “In the next matches, we are wishing to do better. In two days, I hope we can show what we really know and can do.”