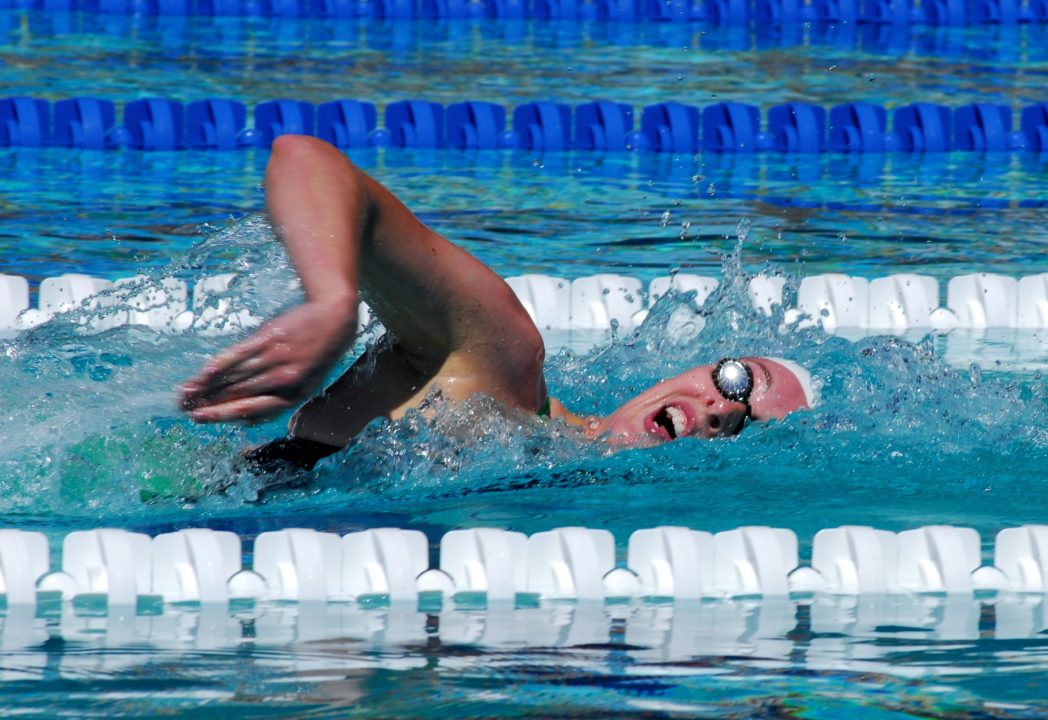 North Baltimore's Allison Schmitt will try to take on Katie Ledecky for the 400 free crown at Nationals in Irvine. Archive photo via Tim Binning/TheSwimPictures.com

This is another Ledecky-By-A-Landslide event, but it’s interesting to note that seven of the top 44 names in the TYR World Rankings this year (as of this writing) come from the US, and all are likely to participate in the Women’s 400m Free at Nationals. By the end of the meet we should have several more names in the top 50, showing just how much depth the US has in this event.

Katie Ledecky will be the top seed with her world’s-fastest-ever-textile-time of 3:59.82 from World Championships in Barcelona last August. (The world record belongs to Italy’s Francesca Pelligrini who was the first woman to break the 4-minute barrier with 3:59.15 at the 2009 World Championships in Rome.) Prior to Barcelona, Ledecky’s fastest 400 had been the 4:04.05 she went to win US Nationals/WC Trials in June 2013. This season Ledecky has already registered a 4:03.09, which is the world’s leading time.

2012 Olympic silver medalist Allison Schmitt was the American record-holder until Ledecky bumped her off the pedestal with her 3:59.82 in Barcelona. Schmitt broke the American record going 4:01.77 in London, where she finished second to France’s Camille Muffat by a mere .32. Schmitt’s top time for this season is 4:08.65 from Charlotte GP in May. Although her sweet spot is probably the 200, Schmitt is still the second-fastest-ever American in this event and she should give Ledecky as good a race as anyone can.

Cavalier Swimming’s Leah Smith has improved enormously at this distance in the last year. Her best long course time dated from 2012 Junior Pan Pacs, where her winning 4:07.10 set the meet record. But last season her top swim was a 4:10-high at Charlotte GP. This spring alone Smith swam under that mark four times; then at the Potomac Valley Senior Championships she popped a 4:06.93 personal best for the second-fastest time in the country. In short course she had a great year, too, notching the third-fastest US time (behind Ledecky and Missy Franklin) in the 500.

Cierra Runge of North Baltimore has exploded this season into one of the strongest American mid-distance freestylers. Her pre-2014 personal best of 4:13.2 had come from CeraVe Invitational in January 2013. At the same meet this year she posted a 4:10.0. Since January Runge has swum the 400 a total of eight times, three of which were sub-2:10 personal bests. Coming into Nationals with the third-fastest time in the US (4:07.67) and 24th worldwide, Runge has really come a long way. The work she is doing in that distance group at North Baltimore should have her poised for a big summer.

Runge’s training partner at North Baltimore, National teamer Gillian Ryan comes in to Nationals with a 2014 time of 4:08.51. That ranks her fourth in the US and 27th in the world for the year to date. Runge won the 2013 US Open with a 4:07.87, about a half-second off her lifetime best, and finished 2013 with the third-fastest time in the country. She is one of the pillars of this incredible group of women at NBAC and this very well could be a defining event at a defining meet for her.

Bluefish’s Elizabeth Beisel will probably prove us wrong and finish in the top three. We haven’t seen her look this good in years. Her top 2014 time is within 1.5 seconds of her lifetime best and currently ranks sixth in the US and 29th in the world. Beisel made the 2012 US Olympic team in the 200 back and 400 IM but she is a great 400 freestyler and with renewed focus on the event she might surprise a lot of people.

Chloe Sutton of Seal Innovation Team has been at or near the top in the distance free events for longer than anyone else in the group. At 2012 Olympic Trials Sutton finished second to Schmitt, beating Katie Ledecky by .82 to secure the second 400 free spot on the US Olympic Team. In 2013 she took second to Ledecky at Nationals/WC Trials, again making the US team in the distance and competing in Barcelona. Sutton clearly has the experience; what remains to be seen is how the change from Mission Viejo to Seal last August will affect her performance this summer.

Amber McDermott of Athens Bulldogs has had more success in short-course yards than in long-course meters, but she deserves attention this summer. McDermott has already gone 4:12:20, which is 1/100 better than her performance at 2013 Nationals/WC Trials, when six weeks later she was 4:09.00 at US Open. She’ll need to be several seconds faster than that but after watching her throughout short course season we think she has it in her. McDermott finished the 2013-14 season with the fourth-fastest time (after Ledecky, Franklin, and Smith). Her lifetime best is 4:08.18 from the 2009 US Open.

National teamer Sarah Henry of Aggie Swim Club finished 2013 with the fifth-fastest time in the country, a lifetime-best 4:08.93 from her fourth-place finish at US Open. This season she has been 4:11.1, which is several seconds faster than she was on the run-up to her championship meet last summer. Henry always seems to be in the mix in mid-distance free finals: top-8 at NCAAs in the 500; top-8 at US Open in the 400; top-8 at 2012 Olympic Trials.

Lindsay Vrooman of Badger Swim Club is another one of these consistent performers who we will expect to see with a strong 400 at Nationals. Her lifetime best 4:08.13 comes from her silver-medal swim at last summer’s US Open. It was the country’s fourth-fastest time in 2013. Vrooman was top-8 last year at Nationals/WC Trials and again in the 500 at NCAAs. Her 2014 best swim is a 4:12, which is a bit better than where she was before her championship meets last summer.

I’d put Beisel 5th and Sarah Henry in there as well.

I agree! 🙂
She’s on my “future stars” list for 2 years now.
She can make the final this week.

Of course if all the best contenders swim that event….

The biggest question for me is Allison Schmitt.
Her last great 400 free was the olympic final in 2012.
Will we see the Allison from 2012 or the Allison more 100 free/200 free oriented of the last 24 months?
She can finish second or not qualify for the final in my opinion.