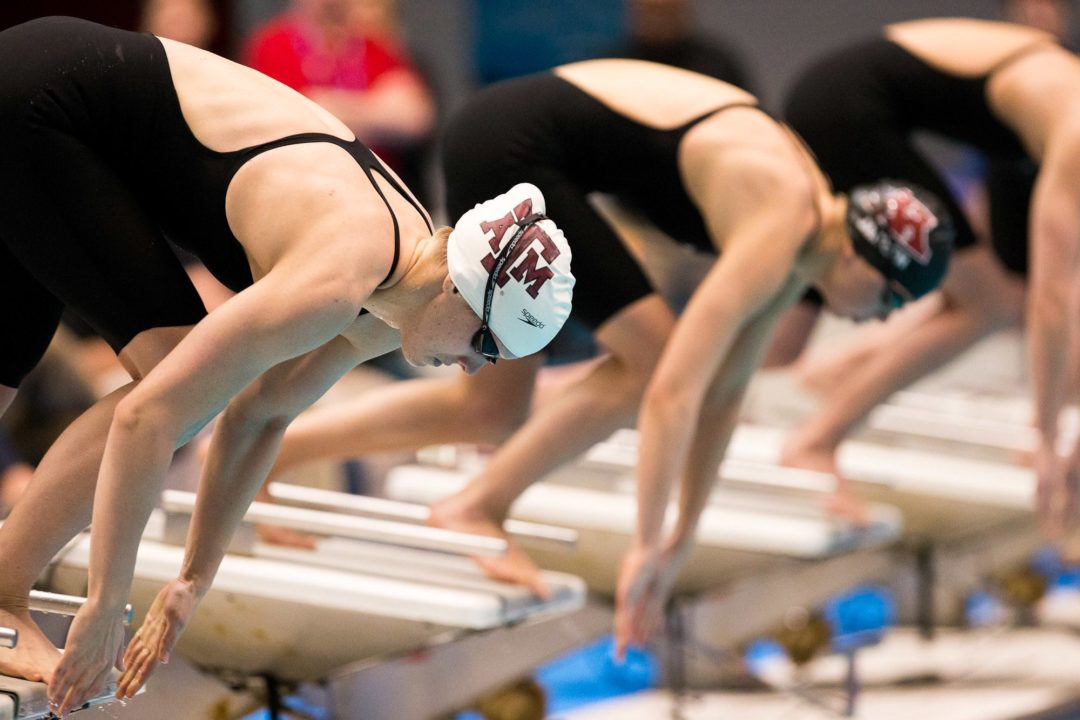 Sarah Henry and the rest of the Aggie women dominated North Texas and Houston to improve to 3-0 on the season Friday. Archive photo via Tim Binning/TheSwimPictures.com

The Texas A&M women debuted at number seven in the CSCAA coaches poll, and they showed everyone they deserve to rank that high with an impressive performance on Friday.

A&M won 12 of the 13 events over Houston and North Texas, and had two swimmers who doubled up during the evening.

Senior Sammie Bosma was one of the Aggie women who took multiple individual victories. Bosma won the 50 free in 22.72, with her teammates Beryl Gastaldello and Meredith Oliver helping Bosma complete the top-three sweep in 22.84 and 23.96, respectively.

Sycerika McMahon, a sophomore, won the 200 free and 500 free for the Aggies. McMahon was 1:49.38. Her teammates Lilli Ibanez Lopez and Kelli Benjamin were 1:51.29 and 1:52.52 respectively to complete another sweep for the Aggies.

Another impressive came from Colleen Konetzke in the mile. Konetzke was 16:52.81, and brought the swim home in a closing 50 split of 29.03. Konetzke, in the Aggies’ first shot at the full distance this season, was well ahead of her teammate Caitlynn Moon, who took second in 17:19.96, and Wasiliewska, who was 17:52.33 for third.

A&M continued winning, and continued winning big, with a victory from Sarah Gibson in the 100 free in 51.93. Gibson was over a second and a half ahead of Isabelle Morris of North Texas, who was 53.49 for second. Emma Moore of Houston was 53.90 for third.