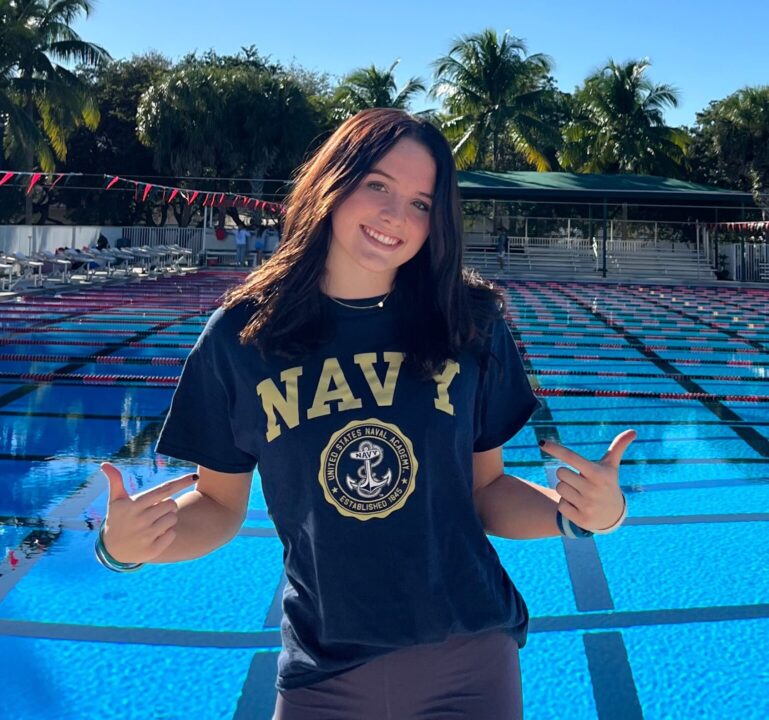 Erin Miller, a Winter Juniors qualifier from Florida, has announced her verbal commitment to the United States Naval Academy. Current photo via Courtesy of Erin Miller

Erin Miller, a Winter Juniors qualifier from Florida, has announced her verbal commitment to the United States Naval Academy. A member of the high school class of 2023, Miller will join the Naval Academy for the 2023-24 season.

I am so thrilled to announce my verbal commitment to The United States Naval Academy! I chose Navy because of the swimming family and the opportunity to serve my country. I would like to thank my family, friends, teammates, and coaches who have supported me along the way!! Go Navy!!⚓️🏊‍♀️

Miller currently trains and competes with Saint Andrew’s Aquatics in Delray Beach, Florida. She also swims at the high school level with Saint Andrew’s High School. Miller’s specialities are freestyle and backstroke, and she excels across all distances.

Miller has the 2022 Winter Juniors qualifying time in the 200-yard freestyle. Her best time in that event is from the 2020 FHSAA 1A (smallest schools) State Championships. Her time of 1:49.25 was .40 seconds faster than her previous best. It earned her a second-place finish, only .04 seconds away from first place. She also competed in the 500 freestyle at that meet, earning her personal best of 4:55.74 and finishing fourth.

Miller has the potential to bring in a lot of points for the Midshipmen when she arrives on campus in 2023. At the 2022 Patriot League Championships, the Navy sent four athletes to the ‘A’ final in the 200 free. They finished in 1st, 2nd, 5th, and 8th. With Miller’s best time, she would have come in 5th. She would have finished 5th in the 1650 free as well, with two Navy swimmers ahead of her in 3rd and 4th.

The U.S. Naval Academy is located in Annapolis, Maryland. Miller will be joining fellow Floridians Marin Rose and Clarice Spencer on campus for the 2023-24 season.

Don’t know where you got your Patriot league results. They beat 2nd place army by more than 300 points. The men won by more than 120.