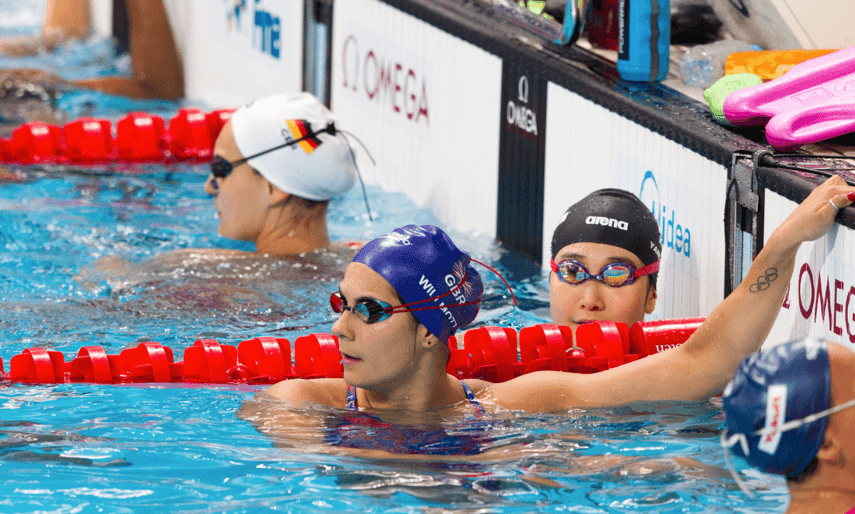 Aimee Willmott moved from seventh to second the world standings with a 3:34.82 to win the 400 IM. Current photo via Tim Binning/TheSwimPictures.com

The Flanders Speedo Cup today in Antwerp, Belgium saw big swims from international talent. The Brits saw huge success, including wins Holly Hibbott, Fran Halsall, Andrew Willis, Amelia Clines, Georgia Davies and Aimee Willmott, who posted the second-fastest time in the world this season in the 400 IM. Great Britain’s James Guy was the only double-event winner with golds in the 200 and 400 free.

Great Britain’s Holly Hibbott, this year’s bronze medalist in this event at FINA World Junior Championships, took a huge in the 800 free with 8:36.09, nearly nine seconds ahead of the field. Eleanor Faulkner, another British swimmer, came in second with 8:44.67, followed by Portugal’s Tamila Holub in 8:46.89.

Reigning world champion in this event James Guy of Great Britain took the win in the 200 free with 1:46.91. That swim was just .3 off his season-best, a 1:46.60 from the FINA World Cup in Dubai, the third-fastest time in the world this season.

British sprinter and two-time Olympian Francesca Halsall tied the third-fastest time in the world this season with 26.06 in the 50 fly. This swim brings her even with Dutch swimmer Inge Dekker, and only China’s Ying Lu and Denmark’s Jeanette Ottesen stand ahead of her in the non-Olympic event.

Halsall’s British teammate Rachael Kelly also edges her way into the world rankings with her second-place swim; her 26.50 is makes her the 17th-fastest swimmer in the world this season. Kristel Vourna of Greece moves to 24th with a third-place 26.79.

Lithuania’s Deividas Margevicius took the win in the 100 fly with 53.12. British duo Adam Barrett and Braxston Timm grabbed the silver and bronze with 53.47 and 53.87, respectively.

Great Britain’s Rosie Rudin, last season’s junior world champion in the 400 IM, won the 200 back by nearly two seconds with 2:12.91. Her British teammate Britanny Horton came in second with 2:14.73, followed by Anna Newlands, another British swimmer, in 2:15.58.

The 200 breast was a close race between Commonwealth bronze medalist in this event Andrew Willis of Great Britain, European Games bronze-medalist in this event Luke Davies of Great Britain, European Small Nation Games gold-medalist Laurent Carnol of Luxembourg, and 50 breast junior world champion Andrius Sidlauskas of Lithuania. At the 100, Sidlausksas, true to his breaststroke sprinting roots, had the lead. But, the other three swimmers, led by Willis made huge comebacks on second half. Willis grabbed the gold with 2:14.13, followed by Carnol (2:14.51), Davies (2:14.74), and Sidlauskas (2:14.91).

Great Britain’s Katie Matts, who finished third in the 50 breast at last year’s FINA World Junior Championships, took the win in the 100 breast, well ahead of the field in 1:08.88. Ana Rodrigues of Portugal came in second with 1:10.28, followed by Great Britain’s Imogen Clark, who swam the race in 1:10.96.

Belgian 2012 Olympian Emmanuel Vanluchene took the win in the men’s 200 IM in 2:02.13, after his fly and backstroke legs rocketed him ahead of the field. Tristan Slater of Great Britain tried to catch up in the second 100, but Vanluchene held him off, and Slater finished second in 2:03.47, followed by Aleksey Derlyugov of Uzbekistan (2:03.57).

Guy took his second win of the night in the 400 free with 3:49.20. He is currently ranked second in the world in the event with a 3:46.76 from the FINA World Cup in Doha. The only swimmer ahead of him is Gabriele Detti, who posted a 3:46.46 at Italian nationals.

The event was dominated by British swimmers. Guy’s teammates Jay Lelliott and Max Litchfield came in second and third with 3:51.03 and 3:51.17.

Great Britain’s Aimee Wilmott had the swim of the day with a monstrous 4:34.82 in the 400 IM. That time is good for a second in the world this season ranking, just a second behind Katinka Hosszu.  This finish marks a big comeback for her; she finished 7th at World Championships last summer with a 4:38.75. After a swim like this in January, Wilmott will be a serious medal-contender in Rio.

Second place went to Uzbekistan’s Ranohom Amanova in 4:40.71, good for a 14th in the world ranking. Great Britain’s Georgia Coates came in third with 4:41.49.

Jasper Aerents of Belgium, this year’s 100 free champion at Scottish Short Course Nationals, took the win in the 50 free in 22.37. His countryman Glenn Surgeloose finished next, a fair bit behind in 22.98. Britain’s James Disney-May finished third in 23.04.

Previously-unranked Georgia Davies of Great Britain rocketed to 6th in the world rankings with a 28.07 in the 50 back.

Quigley took second with 28.53, followed by Ana Sofia Leite of Portugal, who finished in 29.56.

Vladislav Mustafin of Uzbekistan clocked 27.83 to move up to 19th in the world rankings in the 50 breast. Lithuania’s Sidlauskas finished second with 28.35, followed by Charlie Attwood of Great Britain with 28.50.

I’m reading more about the flanders speedo cup here then i do on Belgian websites. THANKS!