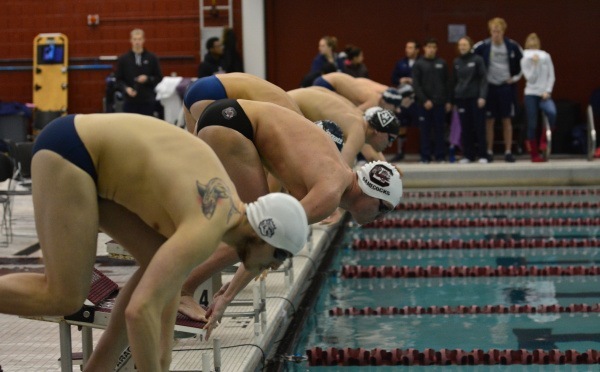 After two days of competition, both of South Carolina’s programs emerged as winners against the visiting Queens, Wingate, and UNC Wilmington teams. The Gamecocks fended off the 2015 Division II Champions as they outscored the Royals with 16 event titles versus their 11. Wingate and UNC Wilmington gained little traction in this quad meet, but managed to place several swimmers in key races and finished third and fourth accordingly. Prior to the start of the day’s events, South Carolina honored seven seniors in the last home meet of their collegiate careers.

This morning it was the Royals who struck first with their 200 medley relay time of 1:45.09 from Hannah Peiffer, Shelly Prayson, Jess Parmenter, and Kyrie Dobson. Wingate’s relay finished second to their Division II rivals at 1:46.40 while also besting South Carolina’s relay by over a second at 1:47.64. UNCW’s touch of 1:51.56 landed in eighth place, but only a second-and-a-half separated them from placing top five.

As the only sub-17 minute swim on the women’s side, Meridith Boudreaux (16:57.90) was the first of several Queens scorers in the 1650 free. Nikki Johnston (17:09.38) was edged by Gamecock Tierney Shimansky’s season best of 17:08.93 and Royals Lauren Frizzel (17:45.37) and Hannah Craig (17:56.21) scored deep points at sixth and seventh. Wingate got their first event title of the weekend with Armony Dumur’s 55.66 100 fly that clipped Peiffer’s race by just two hundredths of a second. Two South Carolina swimmers would touch the final wall before Sofia Petrenko could register a 57.75 for more Wingate points.

Dobson blasted a 24.17 in the 50 free to usurp a field of five Gamecock swimmers while Ana Fish of Wingate recorded a 24.61 for 6th. Viv Louviere (24.91) and Emily Etgen (24.98) from UNCW signaled the last two 50 frees under the 25 second mark. Caroline Arakelian returned for another backstroke victory for Queens, this time in the 100 back with her top time of 56.80. Wingate’s Viktoriya Arkhipova finished a good margin behind Arakelian at 57.62, but out swam Maggie Langdale of South Carolina by .02. UNCW’s highest placement in this race came from Meghan Hannum’s finish of 1:01.73 for 9th.

Emma Barksdale gained South Carolina their first victory of today’s session in the 200 breast at 2:19.03 with only .05 separating 2nd and 3rd place finishers, Jessika Weiss (2:21.32) and Brittney Phelan (2:21.37). The Gamecocks would also evenly split the 200 free’s top eight with Queens with freshman Maggie Harman leading the way at 1:50.67. Barksdale stepped up for the last individual race of the weekend and won the 400 IM in 4:20.58 with a monster lead. Teammate Megan Carlson (4:27.33) was next in line as Petrenko scored the Bulldogs the last of their points in 4:29.28.

South Carolina’s Caleb Tosh, Nils Wich-Glasen, Kevin Leithold, and Jonathan Boland took first in the 200 medley relay at 1:30.81, leaving Queens with second place at 1:32.46. With roughly half a second separating South Carolina’s B relay and Wingate’s Relay, the Gamecocks’ secondary squad bested the Bulldogs for third place, 1:34.38 versus 1:34.92.

The men’s 50 free was dominated by Boland of South Carolina in 20.77, whose victory in this race pairs with his win in yesterday’s 100 free. After finishing second to Boland in the 100 free, Ben Mayes of Queens settled for silver again at 21.18. Wingate sprinter, Lucas Cuadros, rounded out the podium finishes at 21.22. During the 100 back, UNCW got their highest finish of the meet with Tad Spence’s 50.98, finishing only second to South Carolina’s Bryce Kananowicz at 50.81.

The 200 breast was also the first time Queens would pick up their first event title of the day when Rost Fedyna cleared his field in 2:03.62. Will Ryan earned the UNCW Seahawks another top three finish at 2:04.91 with Phillip Willett of South Carolina posting a 2:04.51 to squeeze by Ryan for second. For two consecutive events, Queens claimed another event with Dio Dreeseens’ 1:37.32 over Wich-Glasen (1:39.55) and Evan Freed, who dipped above the 1:40 barrier by .45.

Nick Arakelian of Queens recorded his only individual swim of the session at 3:56.35 in the 400 IM and prevented three Gamecocks from taking over the race. He would return to the blocks along with Dreesens, Ben Taylor, and Mayes to aid Queens win the 400 free relay in 3:00.69.