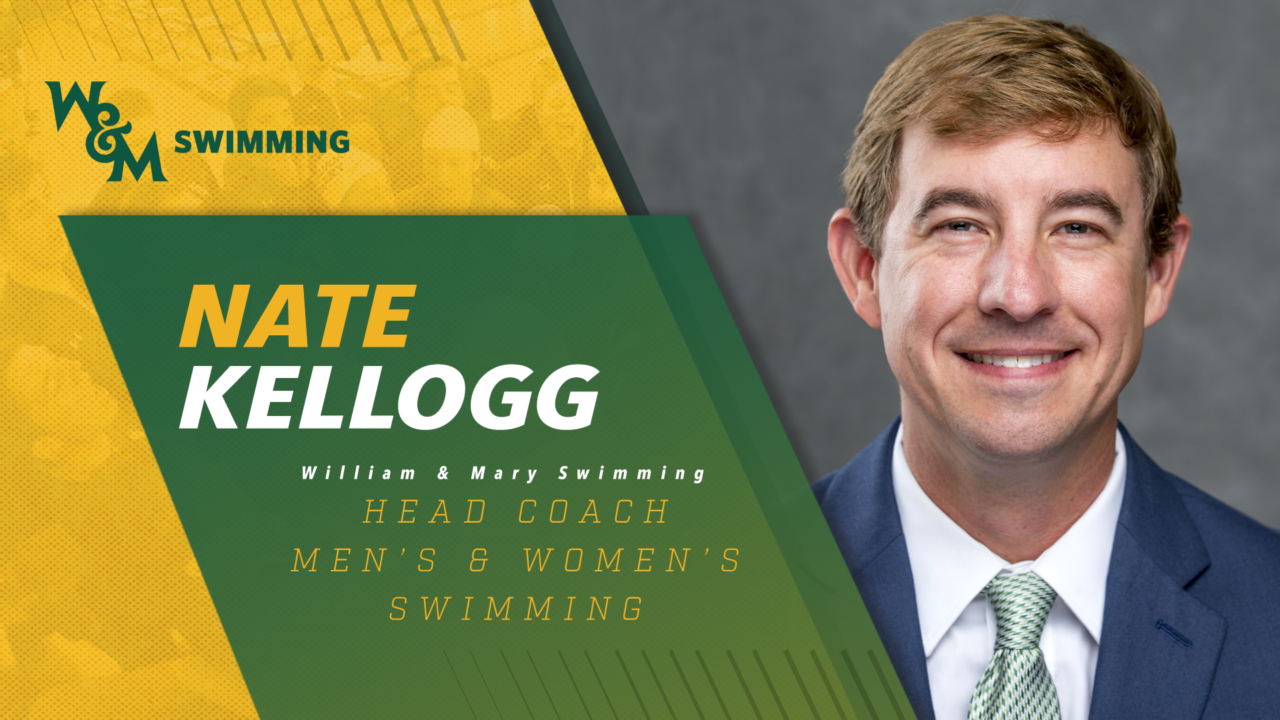 Kellogg was previously head coach at Georgia Southern for 12 seasons before his three as an assistant coach at William & Mary. Current photo via WIlliam & Mary Athletics

“After conducting a national search, it was clear that Nate stood out among candidates, not only for his experience but also for his ability to connect with student-athletes,” Athletic Director Samantha Huge said in a release. “I am confident this will be a seamless transition for our programs, and that Nate will lead our tremendous student-athletes to championships while they pursue their academic goals.”

Crispino, an alum, departed after 12 years to become head coach of of Princeton’s men’s swimming team earlier this summer. Associate head coach Chris Carter, who had served as the interim coach over the summer, was hired as an assistant by Missouri late last week.

During his three years as an assistant with the program, Kellogg coached W&M’s strokes group, with six swimmers winning CAA individual event titles under his watch, and others contributing to winning five of the last six medley relay championships in men’s swimming. Overall in that time, the women’s team broke six school records in his event group, including the 100 back, 100 breast (twice), 200 breast (twice), and the 100 IM. On the men’s side, W&M has broken 11 school records during Kellogg’s tenure in events in which he oversees, with 10 of them coming in 2018-19 alone, according to the press release.

“I’m incredibly honored to be named William & Mary’s next head coach,” Kellogg said. “I have thoroughly enjoyed the past three years with the Tribe and I’m excited to further contribute to the academic and athletic successes of our student-athletes. I want to thank Samantha and the administration for their confidence in me to positively impact our student-athletes.”

Kellogg was previously head coach at Georgia Southern, where he became the school’s all-time winningest coach, for 12 years. He took over as interim head coach shortly before the 2004-05 season after graduating from George Mason, and led the Eagles to four-straight winning seasons. In 2016 he was named the CCSA’s co-Coach of the Year for women’s swimming and diving.

An amazing person that leads with integrity ams serving his student-athletes. Coach Kellogg’s swim iq is off the charts. Excellent hire W&M!

Nate is an outstanding choice