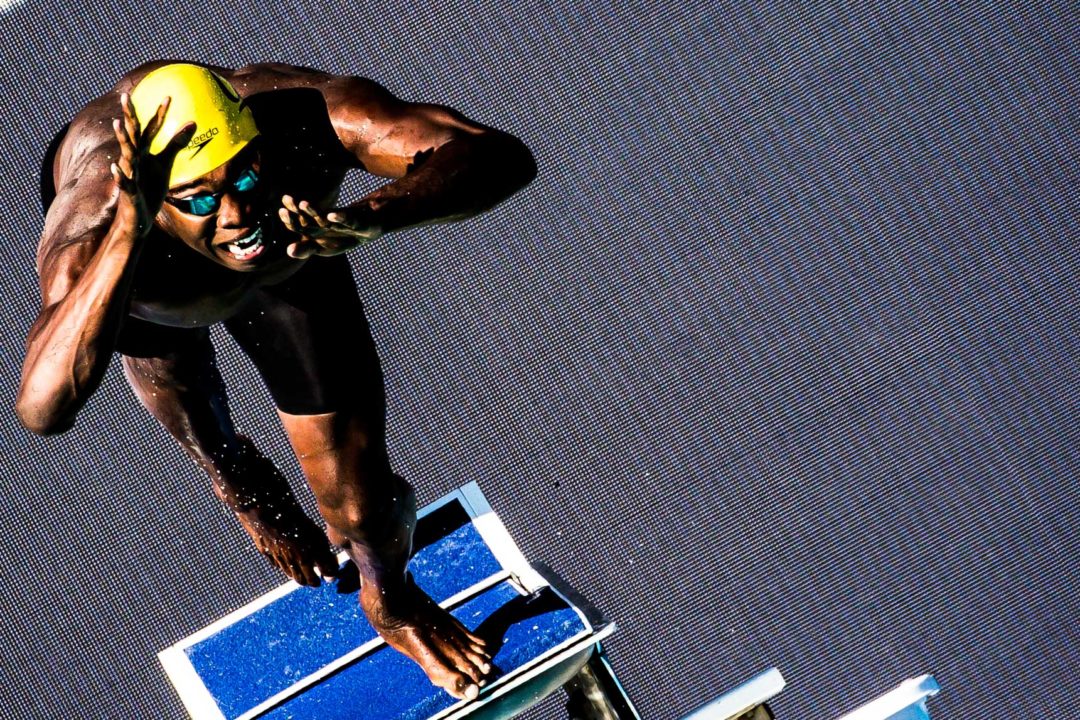 The group advised the organization on its second of two statements amid national calls for change following the murder of George Floyd in May. Current photo via Jack Spitser/Spitser Photography

Shortly after the killing of unarmed Black man George Floyd in Minnesota on May 25, USA Swimming – amid national protests – released a statement saying that it “stand[s] firmly against social injustice and condemn[s] racism and discrimination of any kind.” But that statement drew criticism on social media for not specifically using the phrase “Black Lives Matter.”

That criticism cam especially from an account called “afroswimmers” that is run by Noelle F. Singleton. The account’s post on the matter received support from several US National Team swimmers, including most visibly Olympic gold medalist Simone Manuel, who both commented her support for the original post and shared the post to her personal Instagram account.

In response, last Friday, USA Swimming released a second statement detailing a proposed path forward to deal with diversity in the sport of swimming and acknowledging the sport’s racist history – and specifically stating “Black Lives Matter.”

According to a report from USA Today on Friday, current and former National Team member Reece Whitley, Lia Neal, Cullen Jones, Jack LeVant and Natalie Hinds “provided feedback” on the second statement “as well as deeper institutional changes the organization should make. Whitley preempted the group’s effort and had already called USA Swimming to give feedback on “what he saw as shortcomings in the governing body’s original statement.”

All who provided feedback to USA Swimming had already taken to social media to give their thoughts on the current climate. Additionally, Whitley, Jones, and Neal were featured giving minutes-long testimonies on “Uninterrupted” – LeBron James’ athlete-empowerment platform – Friday in honor of Juneteenth. According to USA Today, Neal orchestrated those appearances.

In his video, Whitley talks about how when he was an age group swimmer, team parents spread and rumor that he was adopted from Africa and lying about his age.

Neal has also co-founded “Swimmers for Change,” a webinar initiative that aims to provide a platform for the swimming community to raise awareness for the Black Lives Matter movement while working towards combatting systemic racism in the US.

Wow, can’t believe i just read that comment (and I wonder if you’re swimmer or just a troll that found this report). This makes my stomach churn, sickened. NO…no, no, no, you are wrong. This is leadership in our sport. AND it took immense courage for these athletes to stand up.

You seem a little emotional Mel, I’m entitled to my opinions. And I respect yours

You’re entitled to your opinions. You’re also entitled to dealing with criticism that follows when the opinion you state (conspicuously, from behind an anonymous username) is very clearly uninformed and in poor taste.

Sorry, Mel, but your comments section is a cess pool.

I agree with you, Mel but with a small caveat. I support these athletes’ efforts to make the sport of swimming more inclusive. And I laud them for overcoming obstacles to get to where they are now: they are truly inspirational! Swimming is a wonderful lifelong activity, and I encourage any effort to bring more people to it. (I have been a long time financial supporter of a foundation that provides swimming lessons, instruction, and coaching to local minority communities.)
I think that “Black Lives Matter” is fine — even admirable — when you just focus on those words.
That said, when you drill down on what many of BLM’s activists are advocating, it is troubling. Abolishing police… Read more »

Woke Stasi – if your policy is to define every movement by its most radical and least well-behaved members, then there will be no movement that passes your standards. Most often, though, that’s a strategy people use to discredit a movement they already oppose for some ideological reason, and not a logical process they consistently apply to other movements they are less resistant to.

3
-1
Reply
Please and thank you
Reply to  Jared Anderson

There’s even a term for it. It’s called a straw man fallacy.

You guys need to wake up to the fact that this has been festering on this site for a while. The laissez faire approach to editing and moderating has allowed hateful and racist rhetoric to be spread about mostly unchecked.

It’s great that some of you are on here now condemning this post but more can and needs to be done.