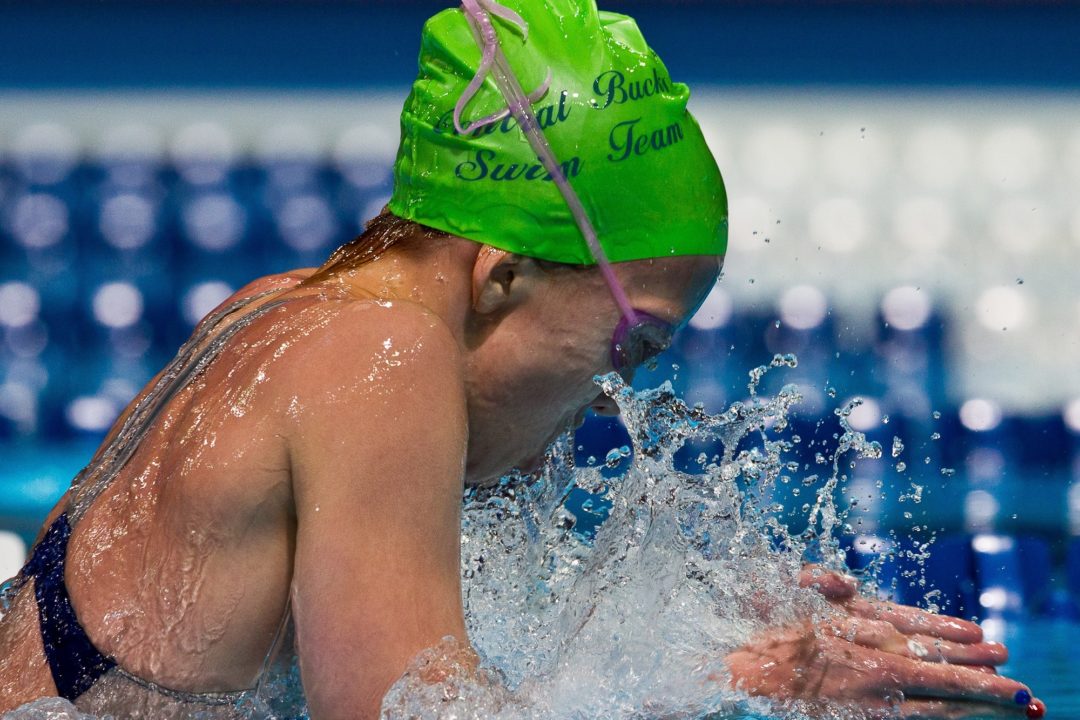 Allie Szekely learned from her World Cup experience and took down a National Age Group Record thanks to it. (Photo Courtesy: ©Tim Binning/TheSwimPictures.com)

It doesn’t look (initially) like Winter Juniors will be up for any National Age Group Records tonight, so Tom Dolan has gladly taken up the torch with a pair at the University of Maryland.

First, Allie Szekely of the Central Bucks Swim Team absolutely demolished the 13-14 200 yard breaststroke record by two seconds, swimming a 2:10.22 to win the girls’ age group race by nine seconds. That cleared the old Katie Hoff record of 2:12.08 from 2003. With Hoff on the verge of World Records at this age, you know it’s special when one of her records goes down by such a monumental margin.

Szekely was a part of the squad that was sent to the FINA World Cup Series tour in Europe by USA Swimming. While all of the junior swimmers benefit from that exposure, Szekely had a bigger learning experience than any of them. She was DQ’ed in almost every breaststroke race she swam, but she emerged better from the experience and rode it to a new record.

Then, in the boys’ 100 breaststroke for 11-12’s, 6’3 Reece Whitley became the youngest swimmer to ever break a minute when he swam a 59.90 in the final. That breaks Michael Andrew’s NAG Record of 1:00.07, set last year. Andrew didn’t swim the record at this meet, but he was the winner of this race last year in an incredibly fast time. Something about Tom Dolan seems to be bringing out the best in breaststrokers.

Whitley already broke the 200 record on Friday, though he couldn’t quite to Andrew’s 50 record.

Andrew, meanwhile, has set a new target for Reece next year; last night as a 13-year old, Andrew (who is also far outsized compared to his competition) was a 57.45 in the 100 breast.

What did Allie S get DQ’ed for in Europe? Dolphin kick prior to arm pull?

I saw a number of photos from Junior Nats last summer where her hands were completely out of the water. Not sure if that’s legal, but it’s not something I’ve seen with other breaststrokers.

KM – hands can be out of the water, the elbows are the key in breaststroke. Must stay in the water.

One of her WC teammates came on and left a comment that it was an issue with her underwaters.