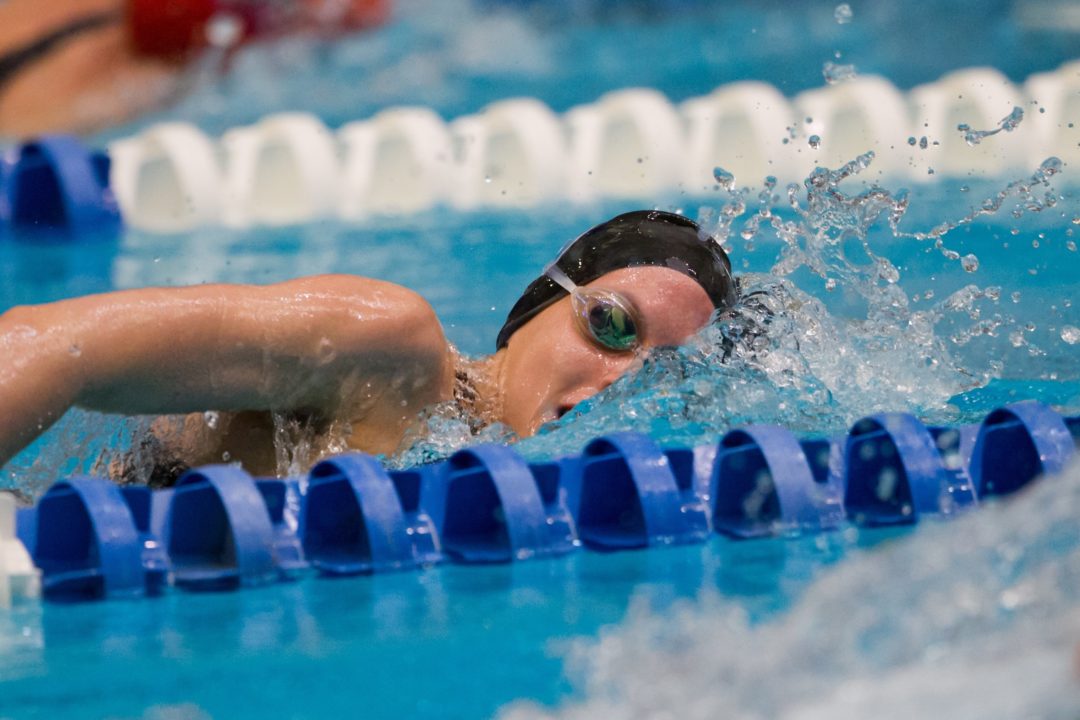 Saturday is the final night of the 2012 Junior Winter National Championships in Knoxville Tennessee, and the way the weekend...

Saturday is the final night of the 2012 Junior Winter National Championships in Knoxville Tennessee, and the way the weekend has gone, don’t be surprised if we get more records. Even without records, though, the men’s 100 free final should be one of the most exciting finals all weekend.

Though something drastic could happen, both team titles seem to be sealed after two days of racing, with SwimMAC well out in the lead for the girls, and Bolles dominating the boys’ race.

In what became a race of attrition, the Lakeside Swim Team’s Leah Stevens won the women’s mile in 16:07.77 to kick off the final night of swimming at Winter Juniors. That’s a best time for her by 9 seconds. Stevens didn’t actually finish any faster than her old best time, swum in a runner-up performance at this meet last year; rather, the whole gap was basically made up in the first 800 yards as she really pushed her pace early in this race.

Erin Emery is emerging as the next big swimmer out of the Sandpipers club, Nevada’s best, and took 2nd here in 16:11.96. That beat her beat time in this race by some 40+ seconds (though her times in the 500 indicated that a pop here was coming).

Auburn commit Ashley Neidigh was unable to defend her title, though she went about the same time as last year, with A 16:13.51 this season being good for only 3rd.

The men of the North Texas Nadadores have now earned victories in both the meet’s shortest event (the 50 free) and longest event (1650 free), as Jonathan Roberts picked up a victory in the latter on Saturday. A 15:12.01 here goes along with his 500 free from earlier in the meet to give him a distance sweep.

The win was not without a challenge though. Roberts swam in the second-to-last heat out of an outside lane – a heat that he dominated without a lot of competition. The fastest swimmers were yet to go, including rising 16-year old distance swimmer Liam Egan from Crimson Aquatics in the Northeast. He finished his swim faster than Roberts did, but without being able to see his competition came up less than a second short of the overall title in 15:12.84.

SwimMAC’s Kathleen Baker proved on Friday that she can swim a 100-yard anything with the best 15-year olds in history. In fact, she can do it all in one night.

On Saturday, she stretched that into the 200’s, taking a win in the women’s 200 back in 1:54.31, her best time by two seconds. That was after holding back in prelims with only a 1:58, leaving her overlooked in this A-Final.

Unlike in the 100’s, where Baker tended to swim in the middle-of-the-pack for the first 2/3 of the race, in this 200 backstroke she went out hard and flipped first at 100 yards. Fellow North Carolinian Hannah Moore from Raleigh did a good job to make it a tight finish, but came up about a tenth short in 1:54.46.

Colorado swimmer Hennessey Stuart, who is unattached at this meet but was last seen swimming for Todd Schmitz’s Colorado Stars, pulled off what could be deemed a big upset in this men’s 200 back. His 1:43.64 was just good enough to hold off a furious finish and a 1:43.74 from North Texas’ Aaron Greene, the two-time defending junior champ in long course.

Stuart, just a high school junior, bettered a pair of seniors in Greene and City of Mobile’s William Glass, a Texas commit, who also had a great last 50. Glass took 3rd not too far behind either in 1:43.96.

Curtis Ogren, who usually focuses on breaststrokes when he’s not swimming the IM races, showed quality versatility with a 1:46.75 for 7th in this race.

The good folks at SwimMAC aren’t the only ones in Mecklenburg County (Charlotte) developing great swimmers. North Mecklenburg’s own 15-year old Emily Allen came within a hair (.02) of the Meet Record to win the girls’ 100 free in 48.73. After nobody was under 50 seconds in prelims, the speed shown in finals was a great relief.

Catherine Ladd (49.55) and Lauren Rhodes (49.74) were also under that barrier in finals. American women’s sprinting has had a few down years at different levels (not the same kind of across-the-board depth as we’ve seen in, for example, women’s backstroking), but this is a big improvment from last year’s Winter Juniors. That’s even with Kristen Vredeveld, maybe the best sprinter at this meet, swimming through what seems to be heavy training (she was 11th in 50.50).

Baker was 8th in the A-Final in 53.58; that would seem to be an intentional coast with significant points guaranteed and a big relay final yet to come.

In a race that lived up to its billing, Bolles’ Caeleb Dressel won the men’s 100 free in 43.29, missing the Meet Record by .02 seconds (exactly the same amount by which Allen missed it in the girls’ race).

He and teammate Santo Condorelli hit the wall nearly identically at the halfway mark, but 50 free champ Brett Ringgold wasn’t far behind either. Ringgold tried to gun down Dressel, but by mere timing of the finish came up short. He was 2nd in 43.44, and Condorelli was 3rd in 43.70.

Davie Nadadores’ Dylan Carter, who has been pure-gold at this meet so far, wasn’t ever really in this race. He finished well to make it close, but a 4th-place finish in 43.84 was the ultimate result (a closer margin than the rest of the race seemed).

Another 16-year old, Wesley Olmsted, was 5th in 44.28. Along with Julian Ballestas of the Metro Aquatic Club in Miami, the state of Florida produced 5 of the top 6 finishers. So it is in high school swimming as it is in high school football, Florida has become a powerhouse for speed.

SwimMAC’s Kyle Darmody, who has swum very well despite being under-the-weather all weekend, won the B-Final in 43.81.

Crow Canyon’s Heidi Poppe won the 100 breast on Friday, but on Saturday morning Heidi was hiding in this 200 as she was the 7th seed and more than two seconds behind the fastest prelims swimmer.

In finals, however, she made sure that even though she wasn’t on the center stage, that lane 1 was the main stage as she jumped out to a big early lead (splitting 29.6 on the first 50) and took a win in 2:13.14. That’s another personal best for the 16-year old high school junior who still has a full semester to build and taper before her high school State Championship meet.

In the 100 breaststroke, Steven Stumph had to give every ounce of his finish to win. In the 200, though, the USC-bound Stumph was swimming solo to a win in 1:55.88, giving him a breaststroke sweep. That’s a pretty incredible for a swimmer who has had double hip surgery in the last two years and shows why that didn’t scare Dave Salo off of him in the least.

Curtis Ogren was with Stumph for the 150 yards in this race, but that seemed to leave him gassed. Stumph turned on the jets and added over a two-second gap on the last 50 yards alone for this win as Ogren was 2nd in 1:58.25. That’s especially impressive given how good Ogren is on the back-half of his IM.

After so many near misses at Meet Records on Saturday, we finally got our first in this women’s 200 fly (weird to say, given how many have gone down at this meet). There, two swimmers cleared it: the runner-up was 15-year old Madison Wright from Kingfish in 1:55.94, and the winner was 16-year old Megan Kingsley from Mount Pleasant in 1:55.50.

Kingsley has been lurking around Junior National Teams for a while now, but perhaps because her best event, the 200 fly, stands out far ahead of most of her races hasn’t been widely recognized. With that swim, however, plus a 53 from earlier in the meet in the 100, she’ll start entering conversations in a race that has been one of USA Swimming’s weakest for the last few years.

Olivia Barker almost broke this record in prelims, but here in finals added a little bit to place 3rd in 1:56.37.

For all of the records that Bolles’ Joseph Schooling has broken recently in the 100 fly, we musn’t lose sight of the fact that at the Olympic level, the 200 fly is his best event. On that note, though he didn’t get the Meet Record, he won his 2nd individual title of the meet with a 1:45.00 on Saturday night.

Schooling, even in this grueling race, just doesn’t seem to fatigue; his final 50 split (27.63) as faster than his third 50 split (27.87). That’s another win for Bolles to cap off their team title.

It kind of went under the radar with Nationals and college invites, but Danielle Valley (UF commit) from Sarasota went a 16:01.64 in the mile last weekend at the GSC Holiday Classic in Florida.

He also ripped off Ryan Murphy’s 50 free by two tenths in the 200 free relay! I can’t wait until his long course times make the same improvement.