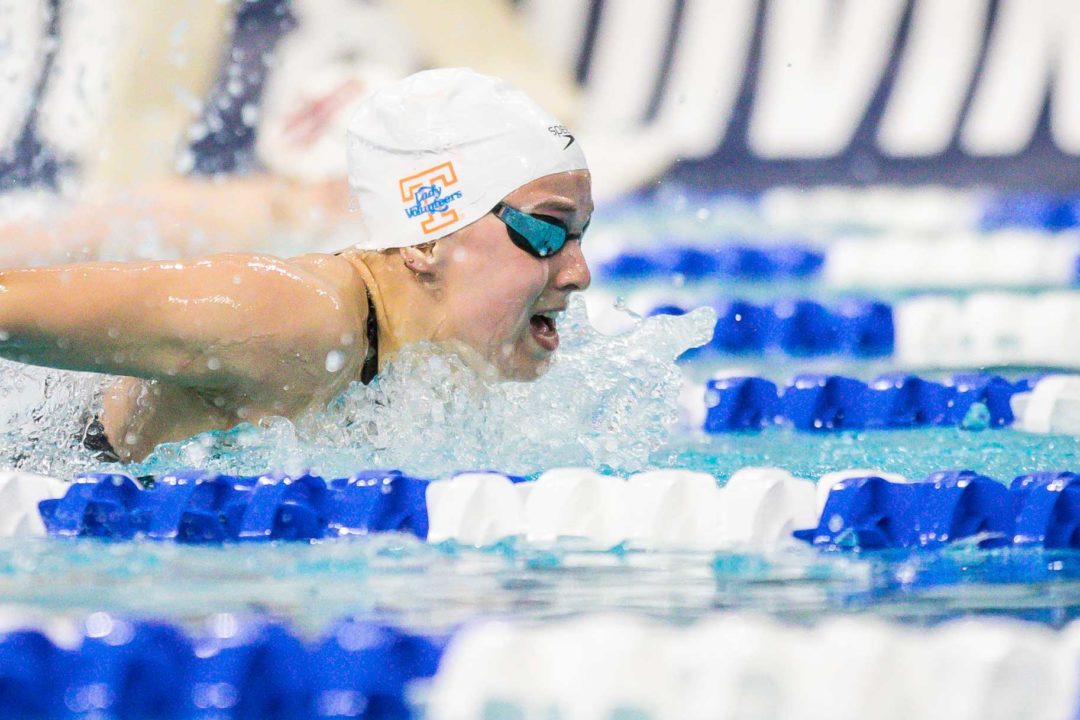 The White Team prevailed over the Orange Team, 304-285, on Friday in the annual Orange and White Intrasquad meet to open the 2019-20 season for Tennessee. Archive photo via Jack Spitser/Spitser Photography

Lane compiled a 3.64 GPA as a kinesiology major, and is planning on pursuing post-graduate work in physical therapy this upcoming fall.

IM/breast specialist Annaliese Streeter from Club Wolverine has announced she will be swimming for the Gamecocks beginning in the 2021-22 school year.

The Auburn men are building some momentum this week in Omaha toward their first season under new head coach Ryan Wochomurka.

KNOXVILLE, Tenn. – The White Team prevailed over the Orange Team, 304-285, in the annual Orange and White Intrasquad meet to open the swimming and diving season Friday at the Allan Jones Aquatic Center.

The White Team won 19 of 32 events en route to their third victory in four years. With the win, the White Team has knotted the all-time series at 4-4.

The first three events of the meet all went to Team White as it picked up wins from Tess Cieplucha and Taylor Abbott in the 1,000 freestyle before earning a victory in the women’s 200 medley relay.

Orange fought back with two wins of its own coming from the men’s 200 medley relay team and Stanzi Moseley in the 200 freestyle.

Seniors Braga Verhage and Moseley led the Orange Team on the night with two victories. Verhage picked up wins in the 50 freestyle and in the 100 butterfly. Moseley prevailed in the 100 and 200 free.

On the diving side, sophomore Grace Cable swept both the 1-meter and 3-meter springboard events for the Orange Team. Keegan Richardson took the 1-meter title for Orange on the men’s side while Will Hallam picked up the win for the White Team on the 3-meter board.

UP NEXT:
Tennessee will travel to Wilmington, N.C., for a dual meet with UNC Wilmington on Friday, Sept. 27 and an open water race on Saturday, Sept. 28.

Dave Parrington, Diving Coach
(On meet format)
“I’m coming out of this feeling really positive,” Parrington said. “Will and Keegan had a good battle on both boards so that was fun to see. All three guys had some real positives tonight. On the women’s side, Grace Cable showed what she’s got. She stood up and really did some great dives today, dives that I thought were better than I would have anticipated for this time of year. That was very exciting to see. The rest of the crew did some good stuff tonight as well.”

(On the newcomers)
“I saw them being positive,” Parrington said. “I saw positive body language. It makes it easier for them to make some of the adjustments, some of the mechanical things we’ve been working on. To see them as a group, especially the freshman, get up there and make some of those changes was pretty pleasing to see.”

Ashley Jahn, Women’s Associate Head Coach
(On Tess Cieplucha‘s night)
“I think Tess is in a great spot,” Jahn said. “She had an incredible summer and she is excited to have a great year.”

(On seeing the freshman compete for the first time)
“I think the freshmen did a great job today,” Jahn said. “A shout out to the upper classmen, our sophomores, juniors and seniors, for doing a really good job of leading them through their first competition as Lady Vols.”

Lance Asti, Men’s Associate Head Coach
(On the team performance)
“There were some real bright spots and I thought they competed well,” Asti said. “I thought that our upperclassmen guided the newcomers through warm up and preparation for competition well. It’s great to see them in a competitive environment and see how they respond when the lights are on.”

(On Michael Houlie‘s three-win night)
“He just continues to get better,” Asti said. “He’s been so focused on making some pretty big changes and to be at the level that he’s been at, to be receptive to making changes is a pretty unique quality. It’s nice to see him get a reward out of those changes right away. Sometimes you don’t see it until weeks or months in the future but he has the ability to make some adjustments, to listen and learn and implement them in a race. For him, it tends to reap a reward pretty quickly.”

Houlie will be the next great beast of UT swimming!

Do we have any times/full results from this?