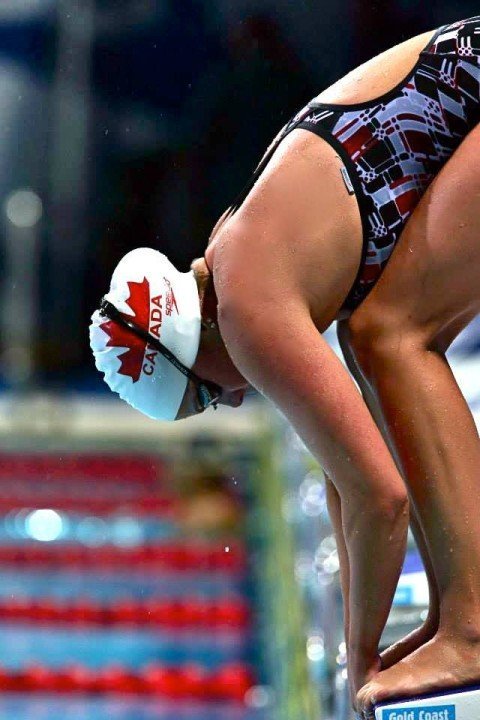 Six athletes who competed for Canada at the 2015 World Championships in Kazan will be competing at the Speedo Western Canadian Open... Current photo via Swimming Canada

The Speedo Western Canadian Open is a long course competition with Youth and Open categories. The women’s youth category is 15 and under while the men’s is 16 and under with the age being determined as of the first day of the meet.

Prelims are swum as senior seeded while there will be “A” and “B” finals in both the Youth and Open categories.

Six athletes who competed for Canada at the 2015 World Championships in Kazan will be racing in Winnipeg. Some of the most intriguing match-ups will be in the women’s breaststroke events where Kierra Smith, who finished eighth in the 200 breaststroke at the World Championships, will go up against national team teammate Rachel Nicol and Fiona Doyle, who represented Ireland in Kazan, in all three distances.

Kelsey Wog of the University of Manitoba, who is just coming off a short course season where she set new national age group records in the 15-17 year old 100 and 200 breaststroke, will also be swimming in all three breaststroke events.

Both Hilary Caldwell and Russell Wood will be racing all three backstroke events. Caldwell should be challenged by Brooklyn Snodgrass in the shorter events where as Wood is the clear favourite in all distances. Jeremy Bagshaw will be racing the 100, 200 and 400 freestyle while his Island teammate Eric Hedlin will be entered in the 200, 400, 800 and 1500 freestyle as well as the 200 backstroke and 400 IM.

There will be several swimmers to watch in the Youth category. On the women’s side Rebecca Smith of Red Deer, who recently broke the Alberta Provincial Records for 15 year olds in the short course 50, 100 and 200 freestyle as well as the 200 backstroke and 100 butterfly, will be competing in all five events as well as the 50 and 100 backstroke in Winnipeg.

On the men’s side Smith’s teammate 15 year old Joshua Young, who recently set Alberta provincial records in the short course breaststroke events, will face off against 16 year old Jaren LeFranc of Penticton. 13 year old Gabe Mastromatteo of Kenora will also be one to watch in the breaststroke events. Mastromatteo comes into the meet with entry times of 31.33 in the 50, 1:08.08 in the 100 and 2:23.99 in the 200.

The distance freestyle events should also be exciting with both 15 year old Justin Katelnikoff of the Cascade Swim Club and 16 year old Alexander Blaskovich of the Pacific Sea Wolves racing both the 800 and 1500 freestyle.

I’m not one to judge, but is there a way for a swimmer to control the picture in his or her circle photo? I am not the most photogenic person either, but Hilary Caldwell does not have the best picture in her circle photo (above). I just wanted to know because my daughter will probably have a circle photo soon and she is throwing a fit because she thinks the other female swimmer’s circle photos are terrible. But, you know those teenage girls! Thank you!

Hillary looks strong, confident and beautiful in her circle photo. Her orthodontist deserves a pat on the back

If it’s any consolation, the funniest ever circle picture belongs to the French swimmer, Yannick Agnel. Go ahead, look it up for a good laugh.