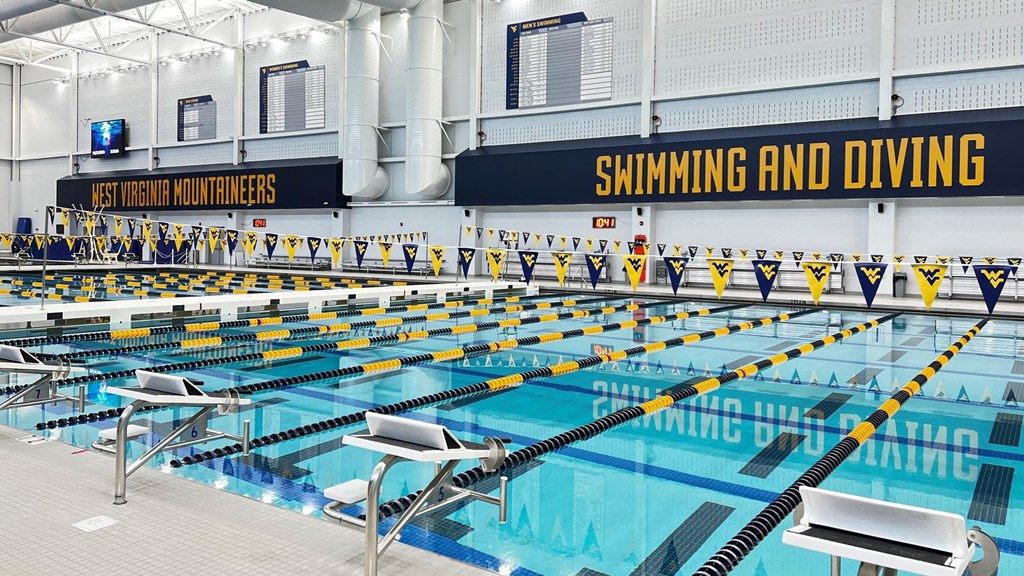 In the Mountaineers' fourth season at the Aquatic Center at Mylan Park, the team is set to host seven home events. Stock photo via WVU Athletics

In the Mountaineers’ fourth season at the Aquatic Center at Mylan Park, the team is set to host seven home events, including the NCAA Zone A Diving Championships for the second time since 2020.

“This season’s schedule gives our program the opportunity for some great competitions,” Mountaineer coach Vic Riggs said. “It’s great to have Cincinnati back onto our schedule and Penn State is always a good test for us, followed by the opportunity to have a strong squad at the U.S. Open. January is always an exciting month for the team prepping for postseason competition.

“With our combination of dual, national level meets and adding our first chance meet the teams will have a great lead going into Big 12 Championships, CSCAA and NCAA Championships.”

After a two-week hiatus, the Mountaineers travel to State College, Pennsylvania, for a dual meet against Penn State on November 4-5.

WVU will kick off the new year with a trio of dual meets, beginning with the Backyard Brawl in Pittsburgh, Pa. on January 14. The Mountaineers and Pitt will square off for the first time since 2021.

The following weekend the Mountaineer women will travel to Ames, Iowa for a dual meet against Iowa State Jan. 21, serving as WVU’s lone Big 12 matchup of the year.

To cap off the regular season, WVU’s twelve seniors will be recognized on Jan. 27-28, as the Mountaineers close out their seven-meet homestand, on Senior Day against Villanova.

Postseason begins on February 3-5, as West Virginia hosts the WVU First Chance Meet, providing some Mountaineers their first look at postseason competition prior to the 2023 Big 12 Swimming and Diving Championships.

The Mountaineers travel to Austin, Texas, on Feb. 22-25, for the conference meet, as Texas will play host for the last time. Last season, David Dixon won gold in the men’s 200 fly, while WVU combined to earn four silvers, eight bronze and one program record. The men’s team earned a third-place finish and the women finished in fourth.

WVU comes back to Morgantown to host one last postseason swimming competition following Big 12’s on March 5, as the NCAA Men’s Last Chance Meet takes place. The following week, West Virginia plays host to the 2023 NCAA Zone A Diving Championships for the second time, with dates to be announced at a later date.