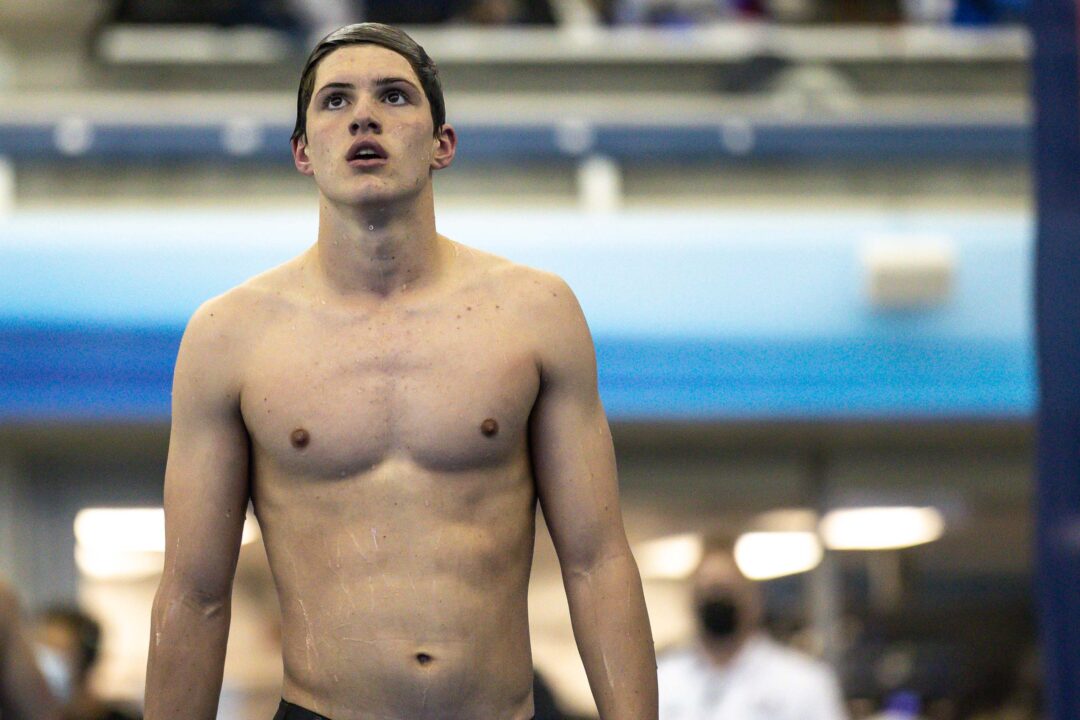 Fourteen-year-old Thomas Heilman of Cavalier Aquatics in Charlottesville, Virginia had an electric meet at the 2021 U.S. Open, taking down the 13-14 national age group records in the 50 free, 100 free, 200 free and 100 fly while also becoming the second fastest 13-14 200 butterflyer ever behind only Michael Phelps. Scroll to check out all of his finals performances from Greensboro.

Disclaimer: USA Swimming only makes finals race videos available. While he competed in the 200 free A final, he was just off his NAG record from the prelims. Similarly, after breaking the 100 free NAG in the prelims, Heilman decided to scratch his B final swim in favor of the 200 fly A final. Neither of those prelim race videos have been made available by USA Swimming.

After becoming the first 14 and under to dip under 23 seconds in the prelim, Heilman returned in the final to slice another .04 off of his prelim NAG. Both of his swims undercut the NAG record of 23.19 from Tokyo 2020 Olympian Michael Andrew. After qualifying 8th out of the prelims, he improved his place in finals, touching in 7th.

After smashing his own NAG record of 54.43 and taking the top seed into the final with a 53.43, Heilman dropped another .16 at night to lower the NAG to 53.27. He flashed impressive early speed, turning at the 50 wall in 24.90 before coming home in 28.37. Heilman had to settle for the silver, however, as the University of Florida’s Eric Friese took the win.

Heilman actually set his NAG record in the prelims at 1:51.27, slicing almost two full seconds off of the prior record of 1:53.04 by Maximus Williamson. This is his finals race, which came shortly after his 100 fly final where he took the silver. He was just slightly slower in finals but still over 1.5 seconds under the former NAG.

In his final race of the meet, Heilman rocked a 1:59.87 in the 200 fly to finish in third overall. While it was his only event of the meet where he didn’t break the National Age Group Record, he now sits second all time behind Michael Phelps. Phelps swam 1:59.02 in 2000 just months before making his first US Olympic team at the age of 15 in this event.