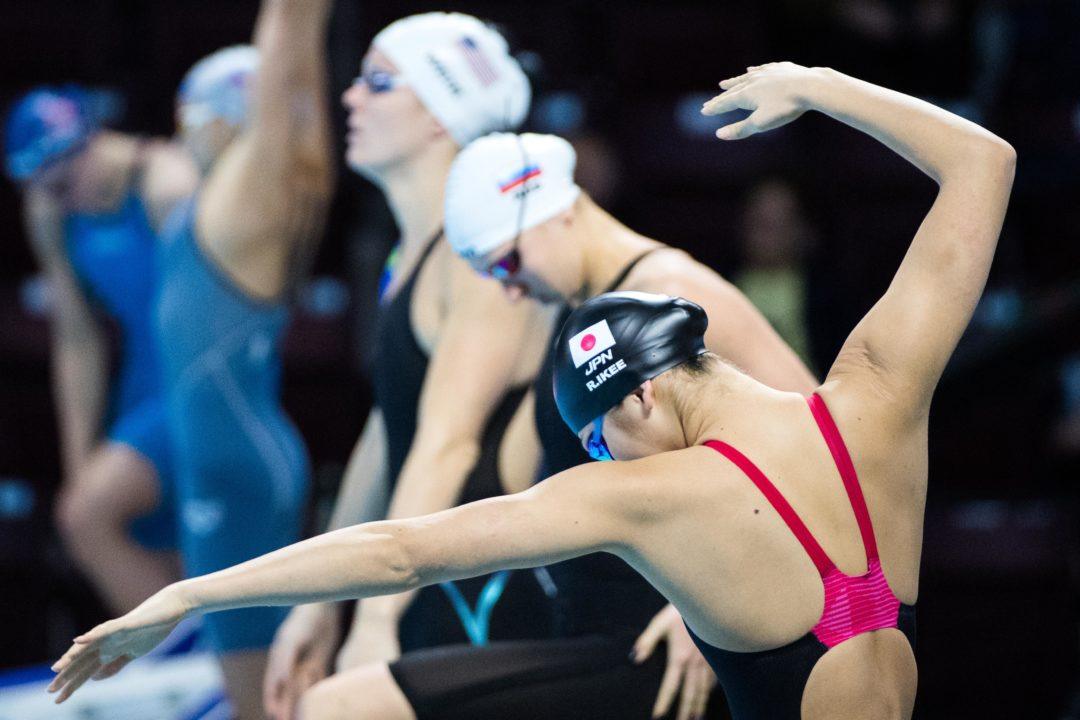 Yesterday while competing at the 72nd National Sports Festival of Japan, young Olympian Rikako Ikee lowered her own national record and World Junior Record in the women’s 50m freestyle. Producing a super quick time of 24.33, Ikee took gold by almost a solid second and added the victory to her 100m free win from day 1.

We reported how this annual meet is typically a 3-day affair, but was reduced to just 2 days this year due to monsoon. Note in the race video below how the competitors are battling wind and rain, yet Ikee persevered and took her 50 free to new heights.

While competing at this weekend’s National Sports Festival of Japan, 17-year-old sprinter Rikako Ikee lowered her own national record and World Junior Record in the 50m freestyle.

Entering the 72nd edition of this Festival, Ikee’s personal best and national record stood at the 24.48 she produced at the Konami Open earlier this year. At the time, that mark represented the World Junior Record, but Ikee hacked another .15 off of that outing to win the 50m free event tonight in a monster 24.33, the only sub-25 mark of the field.

At just 17 years of age, Ikee holds the Japanese national LCM records across the 50m/100m/200m freestyle and 50m/100m butterfly events. Her most recent international competitions include both the Senior and Junior World Championships this past summer. At the former, Ikee was able to score a sub-25 outing in the 50m free semi-finals with a mark of 24.94 to finish 16th in the event. Her highest finish in Budapest came in the form of her 100m butterfly time of 57.08 that rendered her in 6th place in that race final.

With the Tokyo Olympics now just over 1000 days away, Ikee’s trajectory has the teen on a path towards host country glory come 2020.

Wow. She did it in a outdoor pool while it was raining. Pretty impressive. Is this the pool where Akihiro Yamaguchi went 2:07.01?

No. I believe that was Gifu- it seems Japan has so many outdoor/indoor 50 m pools. I heard even most of elementary schools have 25m pool on campus for their PE.

Outdoor pool, in the rain, swimming against the wind. Impressive.

I did not realize she could only swim in the age restricted races…this final was for high school 11-12th graders. They seem to devide into three age groups- B (9-10th graders), A (11-12 graders) and College and up. Even though it is a national competition that the states compete among another( each state send their representatives), Ikee swam in the junior national setting with this time. Wow!