With a little bit more speed and some more improvement off the flying starts it's likely they could get into the 3:33-high range come Rio which would make them one of the best teams worldwide. Current photo via Chris Tanouye/www.christanouye.com 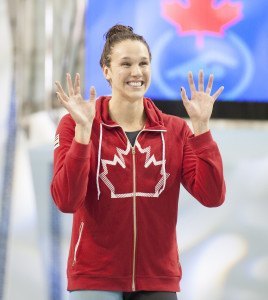 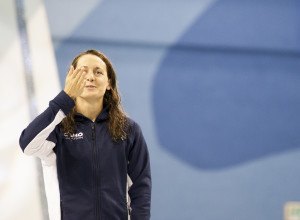 Michelle Williams is one of the four High Performance Centre – Ontario athletes coached by Ben Titley who qualified for the 2016 Rio Olympics and will be competing as part of the 4×100 freestyle relay team.

At the touch Williams was a 54.45 to clock in just shy of her personal best time of 54.21 from last years’ Canadian team trials.

Collectively the team has a very strong chance at earning a medal in Rio. By stacking up their best flat-start times, they already go a 3:35.20 which is more then a second faster than the Canadian record time of 3:36.44. That time would have placed them fourth at the World Championships, moving them up one placement.

If you take into account the fact that they’d be faster with a relay start, they’re definitely in medal contention. Last summer, the American women took home the bronze with a 3:34.61.

If you take just 0.4 seconds off three of the Canadian swimmers’ times (a flying start is usually roughly 0.6 seconds faster) the Canadian team puts up a 3:34.00.

With a little bit more speed and some more improvement off the flying starts it’s likely they could get into the 3:33-high range come Rio which would make them one of the best teams worldwide.

To see coach Titley’s comments on the relay watch the video below:

I hope this coach has got a house, mortgage and young kids in schools here. We need him to put down roots in Toronto.

He truly is an amazing coach and person. My daughter swims for OSA and they train alongside the national HPC swimmers most practices. Ben Titley and Andi Manley are good friends. They are both great. Its a great environment and he takes time to interact with the OSA kids. Its inspirational for them. If more people would embrace the OSA program the future for Canadian swimming could be even better.

True. Although he is proven in the UK. And if he isnt given the chance then he cant prove himself. Which also isnt fair. As a parent I love the program. Is Emily making teams? No. But she also isnt a true HP swimmer. And if non of the true HP swimmers give him a chance then he cant prove himself. Emily seized the opportunity and we are incredibly happy. Up to others to either take the chance or not.

I’ll rephrase that then
Unproven in CANADA

Unproven? He came to Canada with a long pedigree, Google him.

Thank you Captain Ontario. Believe me he is amazing. Emily is incredibly happy. And its a whole program. Not just Andi. Amber the biomechanist is with the kids every day. Every single race is videotaped and played back for them after. Access to a sports psychologist if needed. You can either believe it or not. We love it.