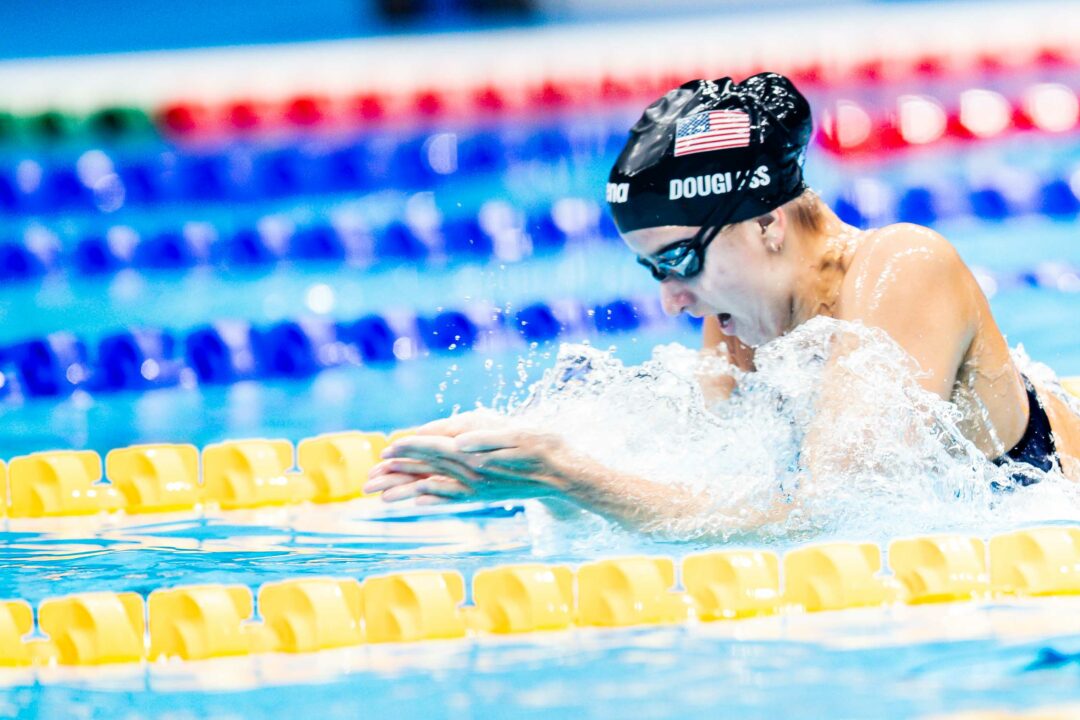 On Saturday, Kate Douglass took down the ACC record in the 200 breast with a time of 2:03.58 and then proceeded to lead off UVA's 400 free relay with a 47.56 Archive photo via Jack Spitser/Spitser Photography

Records continued to fall on day 3 of the Tennessee Invite – the second consecutive finals session where an ACC conference record was broken by a Virginia Cavalier. On Saturday, it was Kate Douglass in the 200 breast final with a time of 2:03.58.  You can read the full finals live recap here.

Alabama’s Kensey McMahon took control of the 1650 free final, beating the time she posted at 2021 NCAA’s by more than 8 seconds. She touched the wall at 15:52.05, ahead of 2nd place finisher Kristen Stege of Tennessee and Virginia’s Emma Weyant who snagged 3rd.

UNLV’s Cam Castro won the men’s 1650 by more than 4 seconds with a time of 15:04.59. Tennessee’s duo of Jake Narvid and Rafael Ponce de Leon took 2nd and 3rd place, respectively.

Olympian Rhyan White of Alabama dominated the 200 back with a winning time of 1:49.73, about .7 off the time she posted at 2021 NCAA’s which earned her 2nd place.  Virginia’s Reilly Tiltmann and Ella Bathurst rounded out the top 3.

Panos Bolanos kept UNLV’s win streak going, getting an early lead and holding on for a winning time of 1:41.18. Alabama’s Jake Marcum was right with him, finishing .02 behind, followed by his teammate Eric Stelmar who placed 3rd.

After winning the 50 free final on Thursday, Tennessee’s Jordan Crooks claimed victory in the 100 free final with a 42.41. He out touched 2nd-place finisher Matt King of Virginia by .13. Alabama’s Kaique Alves took 3rd place with a 42.93, .05 off last year’s NCAA invite time.

Virginia’s Kate Douglass took down the 200 breast ACC conference record with a time of 2:03.58, finishing nearly 2 seconds ahead of the field. Avery Wiseman crushed her Alabama school record to snag 2nd place (2:05.46). She was the first Alabama woman to ever break 2:07.00 in the event during prelims. Virginia’s Ella Nelson placed 3rd and all three swimmers would have made the top 5 at last year’s CAA Championships.

Alabama’s Derek Maas had a tight race with Tennessee’s Lyubomir Epitropov in the 200 breast, with Maas ultimately touching the wall first at 1:52.46 to set a new meet record. Virginia’s Noah Nichols out touched Tennessee’s Jarel Dillard to snag 3rd and be the last swimmer under last year’s NCAA qualifying time of 1:54.28.

Virginia’s Alex Walsh took the 200 fly by storm, winning the race by two full seconds over the field. She touched the wall at 1:51.83, finishing the last 50 yards in 29.00. Tennessee’s duo of Ellen Walshe and Sara Stotler placed 2nd and 3rd.

Alabama’s Charlie Hawke had an early lead, but it was Virginia’s Josh Fong who got his had to the wall first, out touching Hawke by .12 for a time of 1:44.20. Virginia’s Justin Grender took 3rd place in 1:44.71.

Virginia’s Kate Douglass leadoff the Cavaliers’ relay with a 47.56, which would have won the individual 100 free, shortly after her win in the 200 breast.

But it was Alabama’s relay of Kalia Antoniou, Morgan Scott, Diana Petkova, and Cora Dupre who took 1st place with a time of 3:10.59, about two seconds ahead of Virginia who placed 2nd. Tennessee took 3rd place.

Matt Brownstead lead off the winning Virginia relay and was followed by August Lamb, Connor Boyle, and Matt King who split the fastest last 50 yard split in the field: 41.93. They touched the wall first with a time of 2:50.19 ahead fo 2nd-place finishers Alabama and 3rd place finishers Tennessee.

I’m really in awe of Douglass’s 200 BR swim. To me it’s the swim of the week. In 40 years of swimming I thought it was a hard and fast rule that 200 breast and sprint free were on entirely opposite ends of the swimming alignment chart. Like trying to make your character lawful neutral evil good. And to be equally talented in the 200 IM and sprint fly is even more impressive. As many have noted before, a kind of Tracy Caulkins level of versality. If I could think of a better comparison I would.
I’m looking forward to see what she can do in March against other generational talents like Maggie MacNeil and Gretchen Walsh and others.

Kate and Alex are such a lethal combo. Can we please take a minute for Alex 200s though?

She could easily A final at NCAAs in all five 200s, which I’m not sure anyone else could do besides maybe Kate if she tried it. Plus she has split 21.0 and has a 4:01 400 IM now. It’s truly quite amazing.

Just incredible. She would destroy everyone at southeasterns while at NAC I knew she’d be great in college, but not this versatile!

Forget these UVA times and videos, where’s the article that highlights Tennessee and Alabama beating Virginia!!!!!!!!

There are no caps on the number of swimmers who can compete in each event. Scoring for this meet does not reflect how a championship meet would be scored. I would not put too much stock into the team scores.