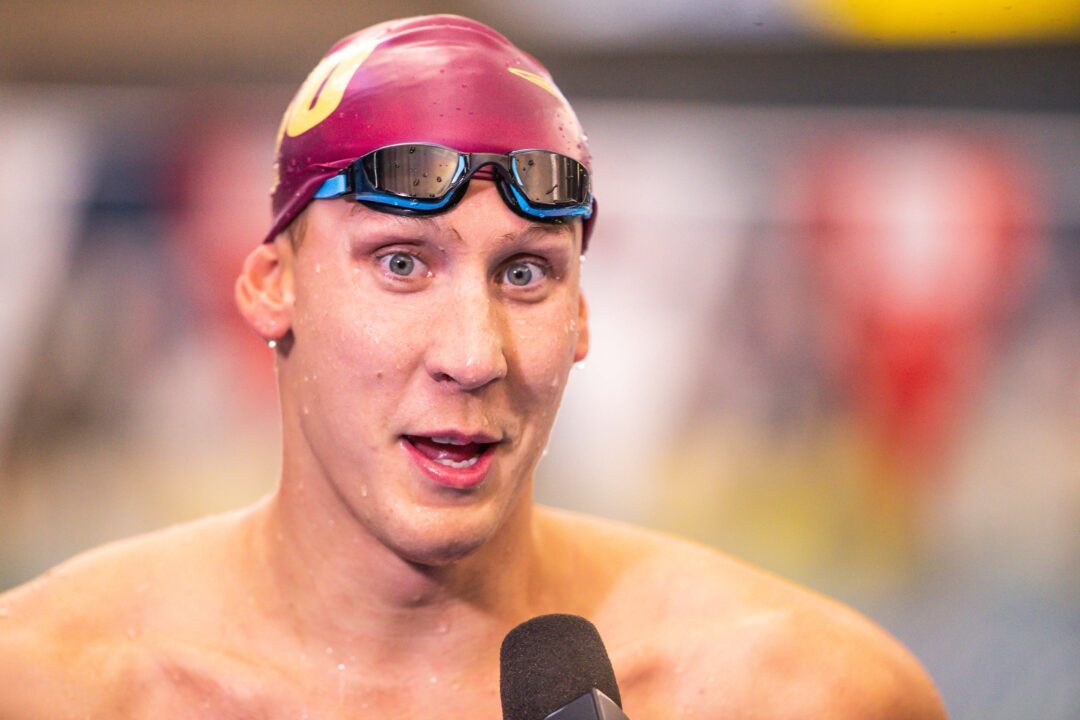 "I know my age may seem a little older now, but I still feel like I'm 18," Chase Kalicz said after breaking the U.S. Open meet record in the 200 IM final. Current photo via Jack Spitser/Spitser Photography

At 28 years old, the new member of the Arizona State pro group showed no signs of fading as he comfortably held off a pair of teenage talents in Texas A&M freshman Baylor Nelson (1:59.14) and high school junior Daniel Diehl (1:59.89).

“I’m kind of shocked by that time actually,” Kalisz said. “But in all honesty, I’ve been doing this for a long time, and this is some of the most fun I’ve had swimming. I really am enjoying everything. I’m surrounded by a great amount of youth, and a lot of great training partners.”

In the race right before Kalicz’s victory, ASU training partner Regan Smith rallied past Leah Hayes in the women’s 200 IM. Kalicz and Smith announced their decisions to train with Bob Bowman and the Sun Devils on the same day in August. Four months into the experiment, it seems to paying off for both of the versatile Olympic medalists.

“Regan just had a great swim; I get to feed off that everyday,” Kalicz said. “I know my age may seem a little older now, but I still feel like I’m 18. I really am enjoying this process and I want it as bad as I ever have.

“It’s a lot simpler for me because Bob is my age group coach, so I’m very familiar with it,” he added, comparing his transition in Tempe to Smith’s. “But I’d say Regan is adapting really well. It’s really great to have her, she’s an animal in practice — really phenomenal practice swimmer. Everything’s going according to plan so far.”

After qualifying third in prelims, Kalicz left no doubt about the outcome after overtaking Diehl at the 100-meter mark. Diehl and Nelson were the only other swimmers sub-2:00 in the final.

I am kind of pissed by the fact this huge swim has gone almost unnoticed..

And there were 2 comments before mine

This kind of time at this point in the season where training is heavy, I think we can expect quite a big performance come fukuoka.

Can’t wait to see Kalicz, Marchand, and Diehl battle it out at 2024 Olympics. Defending gold medalist vs home country favorite vs a Phelps-like 19 yr old US phenom

I feel bad for Casas and Foster, although i think Foster will skip 2IM anyway

Gotta love the veteran energy, the vets been killing it lately on the mens side (fink/kalisz mainly)